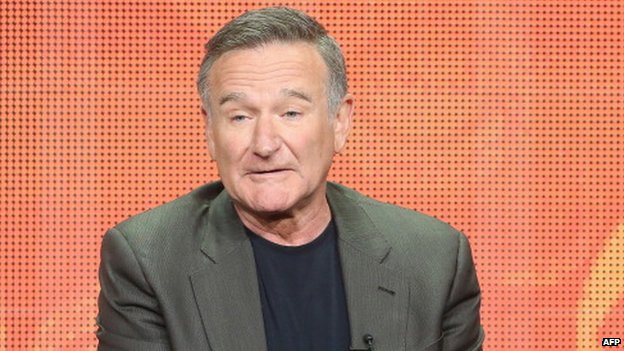 US actor Robin Williams has been found dead, aged 63, in an apparent suicide, California police say.

Marin County Police said he was pronounced dead at his home shortly after officials responded to an emergency call around noon local time.

Williams was famous for films such as Good Morning Vietnam and Dead Poet's Society.

He had been open in the past about his struggles with alcohol and drugs.

He had recently returned to a rehabilitation centre to "fine-tune" his sobriety, the Los Angeles Times reported in July.

"At this time, the Sheriff's Office Coroner Division suspects the death to be a suicide due to asphyxia, but a comprehensive investigation must be completed before a final determination is made," police said in a statement.

This might be a good time to bring up that we do have a Bipolar and depression support group should anyone need to vent / talk. http://www.thinkatheist.com/group/depressionbipolersupport

It is very sad, the horror curse of fame kills another actor.

It is yet another reminder that drug addiction and alcoholism is no joke. It is also never to be taken for granted that you are not suseptible to reverting back to maladaptive behaviors........ Although I no longer believe that one must submit to a higher power to get (and stay) sober, I do believe that no one can do it (completely) alone. In my own experience with particularly alcoholism, is that it almost (dare I say always) always accompanies an underlying (or many) mental illnesses and likely childhood (or adult) trauma. The biggest hurdle to step over is to admit your mental health condition(s) to yourself.......and seek proper treatment. Sometimes it is the mental health condition that makes the alcoholic, not the alcohol that makes the mental illness. Over drinking and/or drugging is the numbing agent to escape the pain of facing the truth - about yourself. Sometimes when you face the ugly truth, you find something hideous.

Someday, somewhere - anywhere, unfailingly, you'll find yourself, and that, and only that, can be the happiest or bitterest hour of your life.
~Pablo Neruda~

I suspect that he had that moment, and did not know how to pull through. It angers me that many 12 step programs peddle their fairytales instead of offering solid support to people trying to recover. If a person doesn't know where else to look because they have put too much clout in what the supposed "experts" are telling them about recovery, they may soon realize they build their house on quick sand....there is no foundation. And so when it seems hopeless, where is one to turn?

I am sad that Robin Williams felt so hopeless, not seeing his full......potential.

I also grew up with him. It seems like he was always there.
He is missed.

Having survived a 2-year clinical depession, I understand suicide. I was never suicidal myself, but it became clear to me WHY people do it. I just want to add that depression isn't about being sad, it's about being unable to be happy. A life with an inability to experience joy.

Yeah, I felt that way about him too. The classic dichotomy of comedy. Maybe comedians are such astute observers because they are in a way outside looking in.

Robert, creative people are much more susceptible to depression than those who are not. And improv comedians are particularly creative. Jonathan Winters, who was in many ways Williams' comedic predecessor and inspiration, also fought substance abuse and depression.

Comedians in general have a historic association with depression and other mental health issues. Maybe it's a way of coping.

This article features Robin Williams, among others, and seems strangely prescient, since it was written before the suicide.

Comment by Belle Rose on August 12, 2014 at 1:02pm
Might I add that he had just recently re-entered rehab earlier this summer for his addictions. I am not sure it was exclusively depression (alone) that led to this event. I suspect a relapse perhaps? Drinking particularly has a profound depressant effect, especially to those suseptible to depression. I can envision - all it would have taken is one event to push him over the edge, if he was already standing on the cliff. I know how it feels to be standing on the edge of a cliff too. I was depressed and suicidal throughout my childhood. I remember wanting to do it. But somehow, I always knew I had a higher potential and that I was unique, and smart......I knew that. I used to think (honestly) that God saved me.

I'm glad I never did it.

I wish we could have shown him, when he was alone or in darkness, the astonishing light of his own being..... :(

Belle, it'll be interesting to discover the means he used. I don't think it's been revealed yet, but there will be a medical examiner report. If he did it with cocaine + alcohol, I think we can perhaps say that depression over his inability to kick his addictions might have a lot to do with it. If he hung himself or used a gun, who knows. I think they said there might be a report as early as today.