I know that you value Catholic Answers Forums and all the good they do for people across America and throughout the world.

That's why I'm writing to you today because the Forums need your help.

Specifically: Catholic Answers Forums needs to raise $75,000 to cover its operating costs for the next six months.

Please Donate Now to help us continue our work

A Woman Is Murdered.

In One Of The Most Atrocious Way.

She Was Stabbed Multiple Times.

And Then She Had Her Throat Slit.

In Front Of Her Kids.

Her Brother Died Trying To Defend Her.

If There Is A God.

And In His Great Plan.

This Woman And Her Brother Were Meant To Die.

Why Do It In This Completely F*ckd Up Way.

With So Much Pain And Fear In Their Final Moments.

And In Front Of Their Kids.

Why Not Simply Stop…

I am occasionally asked to explain when I became an atheist.  I have several stock answers, but one of my favorite is, “When I read the Bible.”

Here are a few selected verses from both the Old and New Testaments that pretty much explicate both the “morality” and “compassion” of God.  Choose one, some, or all of them at your leisure.  If you only have the energy to choose one, I recommend my favorite:  2 Kings 2:23-24.

A Purpose for Life from the Commonalities of Life

At one point in my life I realized I was agnostic but acknowledged I would still like some sort of guideline on how to live my life. In a sense of the word, a religion. However, I don't call it that.

I decided to look at commonalities of all biology and life on Earth and see if I could imagine a purpose from it. Being that I believe evolution, to me, ALL life on this planet is related. So we are all one. Much to the dismay of many humans. But…

Jesus. Inevitably, he comes up in any religious conversation with a Christian. They will often cite him as a historical figure who's existence is beyond question. Of course many atheist's do not believe there…

In this country, the country of Saudi Arabia, there are living creatures that resembles us humans. Sorry, couldn't help but start with sarcasm. There are humans, not very intelligent ones. These -not so intelligent- humans make up about 80% of the population. What you are about to read is not an exaggeration. In fact, I might be a little conservative.
The government of Saudi Arabia plays with these humans as they see fit. A current situation, for instance, in the light of the revolutions… Continue

why i dont believe in christianity/jesus

for one, even the thought that a virgin can have a child is total bull. im going to impregnate a virgin with myself, so i can be born and kill myself to save peoples sins. okay.

jesus creates his people, and since he is all knowing, he knows how they will turn out. he knows that he will end up killing them. but instead he creates them anyway, just to destroy them.

jesus/god is cruel. if jesus is supposed to be my father. i completely threw away my dad and he would never, NEVER…

How do we know that religion is a self-deception?

I posted a message a week ago under Codie’s discussion topic “Do We Really Need to Respect Religions?”. Kir picked up on one of my comments – “Everything we know of the psychology of religion shows that religiosity is a self-deception, founded on the satisfaction of emotional and spiritual needs of individuals within faith communities” – and said, “I'm wondering if you might expand on this for the reader. I don't think most atheists are all that knowledgeable of this area and I think you're…

Why would an almighty god as Abrahamic religions picture it to be, couldn't be clear enough when it was giving it's words?
Assuming they aren't errors, as apologists make it sound like with their famous Saying "Allah and his messenger knows best" or "You have to dig deep in the quran to understand". I think I did. Moreover, the deeper you go in the quran, the more you will realize that there is nothing holy about it. You will realize that it is just the ideas, fiction and a collection of… Continue 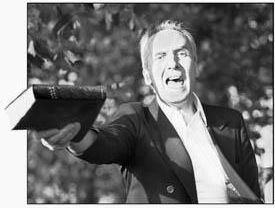 I Am Highly Pissed Off: Part Two

I Wrote A Blog About The Kentucky Law That States That A Person Can Be Imprisoned For 12 Months For Not Believing In God.

And Two Things Crossed My Mind.

1: If I Am Thrown In Jail For 12 Months (or for any amount of time for that matter) For Simply Being An Atheist, When I Get Released (or IF i get released) I Am Still Going To Be An Atheist When I Walk Out Those Doors. I Am Not Gonna Worship God Or Praise Jesus At All. So What Are They Going To Do. Turn Me Around And Lock Me…

I Was Just Curious If Anyone Has Ever Read Or Skimmed Over Some Of Its Pages.

Does Anyone Know What It Has To Say About Anything?

Does It Have A Ten Commandments?

What Sort Of Philosophical World View Does It Have?

I Would Get It And Read It Myself, But I Feel Like That Would Be A Sh*t Storm With My Family That I Do Not Want To Start.

Cause Being An Atheist Is One Thing.

I Don't Want To Give People, Especially Close Minded Idiots, A Reason To Think…

I Am Highly Pissed Off.

Essentially What That Is Saying Is "We Are Going To Put You In Jail, Even Though You Haven't Done Anything Wrong, Just So We Can Keep You From Doing Something Wrong."

And What Makes This Worse Is That Christians Want To Complain About Being Persecuted. But They Are Not…

Last summer I camped in New Hampshire's Great North Woods with a friend for a couple of days.  We kayaked, hiked, and generally looked for moose.  We went very far into boggy inlets in the kayaks, we walked a ways down the Moose Alley Trail in the dark with our headlamps, and we drove up and down "Moose Alley" several times, hoping to have our lives graced with the presence of one of these immense, fearless creatures. From the top of Mt. Magalloway, I visualized the moose in the bog we…

A Babble of the Language of the Whole World!!!

My bible reading is going quite slowly, which means I am still at the interesting parts. I just read Genesis 10:11, three times in fact, to make sure I was reading correctly. Apparently all the world once spoke the same language, so God decided to give them all different languages to confuse them!?!?!

"Come, let us go down there and confuse their language, so that they will not understand what they say to one another."

I watched an excellent show about evolution tonight on my local PBS station. The show was called "What Darwin Didn't Know". The show explains how the science of evolution has progressed over the last 200 years. I would highly recommend the show to everyone.

I've become increasingly frustrated with people's insistence that words can mean whatever they want them to mean, and whatever is convenient for them to mean. Words are meant for one thing: communication. Once everyone personalizes words and definitions, we lose that ability. If "to you" a chair is what the rest of us consider a table, you're going to lose us when you start telling about setting the chair for dinner.

Even more frustrating is when people, or Bibles, make absolute…

I still see WWJD all around. I'd like to wear a bracelet with WIJD and every time I'm in a tough situation and I have to make a decision, I can ask myself "What IS Jesus Doing?"

I can then remember that the choices I make are my own and I can take joy in the results knowing Jesus is doing nothing and I'm doing everything.

wrong with the world

outside you?  is there

didn’t mean to pause you

from stuffing food down your

didn’t mean to make you

think for a second,

when we all know

now, let me ask you again…

is there a problem?