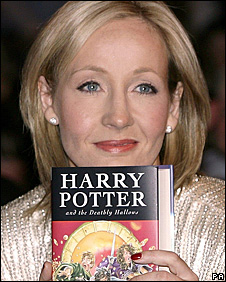 Harry Potter author JK Rowling missed out on a top honour because some US politicians believed she "encouraged witchcraft", it has been claimed.
Matt Latimer, former speech writer for President George W Bush, said that some members of his administration believed her books promoted sorcery.

As a result, she was never presented with the Presidential Medal of Freedom.

A fundamentalist Hindu group called Rashtriya Swayamsevak Sangh in India is apparently close to bringing to market a new soft drink made from cow urine. A blog post on discovery.com has the details.

"Don't worry, it won't smell like urine and will be tasty too," said Om Prakash, head of the group's Cow Protection Department in… Continue

Prizes
One (1) first place entry will receive recognition as the winning t-shirt designer as well as one free t-shirt imprinted with their design. All top five (5) entries will receive… Continue

The father of the three great religions was certifiably insane.

OK, lets do this one more time. Look up the symptoms of Schizophrenia, paranoid type. Read the story of Abraham in the Bible. Notice that Abraham displays almost every symptom. Hears "God" talking to him, auditory hallucination, sees a burning bush that is not consumed, visual hallucination. Has Ideas of reference, he is special God chose him of all people to talk to. Receives command hallucinations to kill people. Believes he is in a personal relationship with the creator of the universe,… Continue

A Brief Look at Margaret Sanger

Here’s a not-too-recent favorite from the archive of a Myspace blog I’ve been running for the last couple of years. Enjoy.

Just to make sure we have an understanding, I’d like to start this one off by clarifying a couple of points. I generally do not enjoy having to present my potential readers with information that many of them already possess. Centering a blog around said knowledge makes me feel like less of a peer and more like a pretentious dickhole who likes to rattle his own… Continue

Have you read any banned books lately?

Also the last week of September is Banned Books Week.

Have you read any banned… Continue

How to train your dogs-er, kids.

Want to know how to program your kids to be mindless obedience machines? Look no further than this book: http://www.gospeltruth.net/children/pearl_tuac.htm

Be careful the next time you hear someone's mobile phone ring--you might be converted to Christianity!

"Every time your cell phone rings you can SPREAD THE WORD, and the people around you will now hear the message of our Lord Jesus Christ, through inspirational, fun, spiritual ringtunes that will affirm the presence of the Lord in their lives."

This is a quote from the website Christian… Continue

My thoughts on Michael Moore's diary:

2. Insurance companies will continue to be able to use marketing… Continue

The Atheist's Guide To Christmas

This was originally posted over at my blog, Cubik's Rube.

If you want to know what I think of the Atheist's Guide to Christmas, a book that's just been released, which was put together by the lovely Ariane Sherine (organiser of the Atheist Bus Campaign) and which features essays from many of the grooviest godless guys and gals of our time,… Continue

"Nones" No Longer a Fringe Group


And in related news...… Continue

Religious life won't be the same after downturn

NEW YORK – Organized religion was already in trouble before the fall of 2008. Denominations were stagnating or shrinking, and congregations across faith groups were fretting about their finances.

The Great Recession made things worse.

It's further drained the financial resources of many congregations, seminaries and religious day schools. Some congregations have disappeared and schools have been closed. In areas hit hardest by the recession, worshippers have… Continue

Don't forget that tomorrow, Sept. 30, is International Blasphemy Day. There's a Facebook page, and PZ Myers put it on his blog.

Insurer Pays Settlement for Discrimination Against Atheists and Agnostics

***Well, well, well. Finally the tables have been turned and the collection plate's proceeds now goes to the atheists and agnostics this time:


Insurer Pays Settlement for Discrimination Against Atheists and Agnostics
September 28, 2009

Last Friday the DeMoines, Iowa-based insurance company GuideOne Mutual agreed to pay a $74,000 settlement for a claim that it violated the Fair Housing Act by discriminating against atheists and agnostics. The… Continue

My Idea of Fun: An Impromptu, Three-Hour Discourse with a Creationist

(A quick side note about all of the names in the post: I'm terrible at names, and I can't really remember anyone's just yet. So they're probably wrong, or attributed to the wrong people. I might go back and fix them once I find out the actual names.)

Sorry for the delay in posting this. At first I was just going to take a small break over the weekend, then I caught the bug that was going around while at the local church picnic. (Apparently, that blessing of the food didn't do too… Continue

Received an email from Secular Coalition for America, I'll just paste it in (as I received it) for your info.

I was in the pastor’s office of my church the first time I ever considered committing suicide. It was a gentle summer’s night in the rural southeastern collective of my youth. The air was sweet with honeysuckle and filled with the incessantly soothing chirp-chirp-chirp of crickets. Lightening bugs drifted lazily above the dewy landscape as the trees danced in the breeze. It would have been a picturesque vision worthy of any cherished childhood memory had I not somehow found myself locked in a… Continue

Michael Sandel’s course at Harvard, “Justice,” is enormously popular, and is highlighted in today’s New York Times. The course is now being made free online, and can be found here.… Continue

Eden, The Fertile Crescent, And Genesis

When I first heard about the idea of the "fertile crescent" some years ago, I immediately thought the area could be the basis of the myth of The Garden of Eden. It turns out that I am not alone. There are plenty of articles and books that mention the connection.

(For those who don't know, the fertile crescent is a crescent-shaped area that straddles the Arabian peninsula and is considered the place where human agriculture was first developed.)

However, some on the… Continue

Dawkins, Harris, Hitchens may be rude, but they have been effective

The vehemence, perhaps even violence, with which Richard Dawkins, Sam Harris and Christopher Hitchens attack religious belief makes many people uncomfortable. Yes, they are rude, and a lot of atheists give them crap about it, but not me.

Sure, they all claim to have heard from people who have heard their rants and converted on the spot to atheism, but for the most part I think they preach to the choir, anger the faithful and amuse everyone else. However ineffective I think they are… Continue