Suffering the loss of a pregnancy, the Coleman family decides to adopt an older child, an orphan from Russia. Orphan strains to make benign scenes frightening, consequently asphyxiating the truly scary moments.
Kate (Vera Farmiga) and John (Peter Sarsgaard) want to add another child to their family, but after the still-birth of their child and family tragedy, pregnancy wasn’t an option anymore. They decided to adopt a child from a Catholic orphanage. There, they meet Ester, a young girl… Continue

Here's an excerpt from my latest Examiner article: "I wanted to believe that Maher was only a little wacky when it comes to modern medicine but I really had no idea how much of that Kool-Aid he drank. But Orac has opened my eyes to Maher’s beliefs when arguing why Maher should not receive the Richard Dawkins Award, an award that is intended to not only celebrate one’s promotion of atheism but one’s commitment to science and reason..." To read more,… Continue 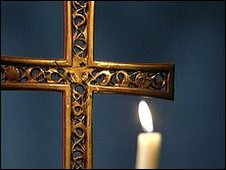 Human rights groups in South Korea say North Korea has stepped up executions of Christians, some of them in public.

The communist country, the world's most closed society, views religion as a major threat.

Only the founder of the country, Kim Il-sung, and his son, Kim Jong-il, may… Continue

TEXARKANA, Ark. – Tony Alamo, a one-time street preacher who built a multimillion-dollar ministry and became an outfitter of the stars, was convicted Friday of taking girls as young as 9 across state lines for sex.

Alamo stood silently as the verdict was read, a contrast to his occasional mutterings during testimony. His five victims sat looking forward in the gallery. One, a woman he "married" at age 8, wiped away a tear.

"I'm just another one of the prophets… Continue

This discussion got me thinking:
http://www.thinkatheist.com/forum/topics/did-you-become-an-atheist-to

I have been having some trouble reconciling something in my mind. I do NOT think we need god(s) to keep us moral, but I DO think we need government and laws to do so. Someone once challenged me on this and said I may as well be an anarchist. I couldn't come up with a satisfactory response to explain why that was false at that moment.

Finally, this morning, it dawned… Continue

Re-Blog: Believing in God is Not the Problem

I've long come to the conclusion that theistic belief is merely one symptom to a wider problem with humans. Chris Zerhusen at The Pile System blog has deduced the very same and has managed to articulate the point quite well, so I will let his words carry this post.

"As an atheist and skeptic, I am constantly fighting the battle (on a very small… Continue

How on earth was it that people believed the world was flat? Dr Karl wonders whether they ever did.

This was sent to me from Gaytor.

Two men appeared in court today charged with attempted murder after a man was stabbed, beaten with bricks and had sulphuric acid forced down his throat during an apparent "honour" attack.

The 24-year-old victim, believed to be a Danish man… Continue

I know this is late, but it's one of my favorites from The Onion. 
Johannes Kepler And The Triumph Of Modern Science Over Medieval Superstition - Best Of Carl Sagan's Cosmos.

Carl Sagan, Ph.D. (1934-1996) was an American astronomer, astrochemist, author, and highly successful popularizer of astronomy, astrophysics and other natural sciences. He pioneered exobiology and promoted the Search for Extra-Terrestrial Intelligence (SETI).

Get your Fresh Hot Kidney and a Dradle! Adam Carolla used to have a bit on his radio show called "Not a Jew" where Non-Jewish people doing insane or criminal things would be talked about then it would be announced that they were, "Definitely, not a Jew." Today a story out of New Jersey will put some heat on the notion that Jews don't commit crimes.
44 people have been alleged to be… Continue

Science that will blow your mind

View my
* My Posts

5 TED Talks on Science That Will Blow Your Mind

science imageAndrew Maynard is a scientist and emerging technology adviser. He blogs at 2020 Science and tweets as @2020science.

Some of the most entertaining, informative and mind-blowing science videos on the web come from TED – the Technology, Entertainment, Design… Continue

For those who want evidence not superstition

For those who want evidence, not superstition

I welcome the new TV show, The Skeptologists and look forward to viewing it. Now more than ever, as even much of the Western world seems to be descending into new Dark Ages of superstition and faith without rationality, extraordinary claims require extraordinary evidence. It is encouraging to see that many people are still carrying illumination to the world.

One of the people behind this program is Brian Dunning, whose… Continue

Meet the Baptists! Part 1: Are You A Good Person?

Earlier this year I went to a wedding outside of Kansas City, Missouri. It was a Hell and Brimstone Baptist Church and their literature was nothing short of amazing! So I helped myself to everything they had to offer and now I want to share it with my fellow atheists. So join me in this series of posts as we get to know the Baptists together. I only ask that former (or current) Baptists do not post spoilers. We don't want to know how it ends. Personally, I think the devil will win and there… Continue


KISSIMMEE (FL)| City commissioners in the Central Florida city of Kissimmee are considering changing their logo to incorporate the motto “In God We Trust.”

Commissioner Art Otero proposed the addition. He said he suggested the change because he disagrees with the direction the country is going under President Obama.

Mom thought she’d jerk a knot in her young atheist son’s tail so she sent him with the neighbors kids to Sunday school. The subject was going to be Moses and his taking his people to safety.

The kid comes home and mom asks, “Well, what did you learn today?”

“Well mom”, the boys starts,
“There was this heavy hitter ‘made” man named Rambo Moses who went off to Egypt to free some people.
He humped a 100 pound rucksack across the burning desert sands and went behind… Continue

The Religious Scientist: A Frustration

I blogged this a few months back, and I realised that it might be right at home here. It's really about my frustration at religious scientists, who by necessity, compartmentalise:


This has been my topic of frustration this week. Maybe I'm being a little bit unreasonable but I would like to clarify and justify my position on this.

I find it really frustrating when a scientist has a religious belief. This is maybe not quite accurate. What I should probably say is that… Continue

(previously posted on FB, resulting from this article about the Catholic Church excommunicating people involved with helping a 9-year old rape victim obtain an abortion, and a debate I had recently with an in-law. I thought you all might enjoy.… Continue