Public Enemies: Worth Looking At, Not Worth Watching

Based on the true story of a notorious depression-era bank robber, Public Enemies brings the crime spree and police hunt of John Dillinger to the silver screen. In a film that desperately attempts to provoke any emotion, Public Enemies fails to capture the imagination, create emotional dimension or shock the senses.

In 1933, during the height of the Great Depression, John Dillinger (Johnny Depp) and his crew crisscrossed the country, robbing banks and became folk heroes. During an… Continue

Carnival of the Godless

I don't know how many people here follow a lot of blogs (I know Nelson does, and Syn, and some others), but for those who may not, I thought I'd point out a blogging event known as the Carnival of the Godless.

The Carnival moves from blog to blog, being hosted at a different one each time. It consists of a collection of links to various blog posts, submitted by bloggers to the host. It servers a couple worthwhile… Continue

It relaxes the muscles, so it removes wrinkles.....and then kills you!

Thousands of years before the Joker gassed comic book victims into a grinning death, Phoenician colonists on the island of Sardinia (map) were forcing smiles on the faces of the dead.

Now scientists say they know just how the ancient seafaring traders created the gruesome smiles some 2,800 years ago—not with a toxic gas like Batman's nemesis but with a plant-based… Continue

Perhaps the most natural family structure??

I got my starter kit in yesterday. At first I was unsure of the amount of nicotine I was taking in as I inhaled the water vapor. I didn't feel like I was getting what my craving was needing but I found out that it was just an alien feeling that I'll just have to get use to. I smoked a real cigarette shortly after & felt the nausea feeling one gets when they've… Continue

I don’t care that Jesus Christ died 2009 years ago!

Main article.
Our countries forefathers establish a strong first amendment to keep the right to free speech and the separation of church and state protected regardless of the government’s position or religious influence. Since then the United States has been greatly influenced by the Christian religion to a point where the United States has: In God we trust on our dollar bill, non-believers can’t hold public office in many States, gays aren’t allowed martial benefits in many states,… Continue

I'm sorry? Did I register for Theology?

I apologize if this blog is scatter-brained. My mind is racing and I am still seething from class this evening.

I started my Biology of Human Sexuality class last Wednesday. Right off the bat I wasn't a fan of my professor. She doesn't seem to know the material. She answers questions like a politician, she simply skates around the initial question and gives back a bunch of BS. When explaining a process...she literally ends it in "blah blah blah". I find this irritating in a normal… Continue

I started a group for it here, if you are near the area and would like to meet likeminded people in person, come join us! They get together a couple of times a month to hang out and have great conversation. I met some wonderful and intelligent people. 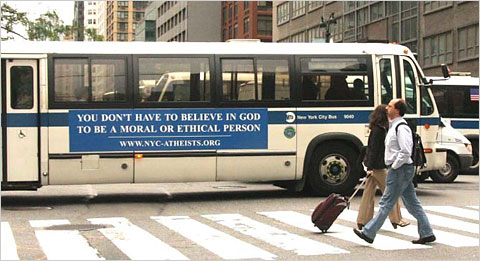 An Atheist Bus Campaign has arrived in New York. The ads, which say “You don’t have to… Continue

Nearly two thirds of UK teenagers don't believe in God, according to a study by Penguin books.

Teenagers even say family, friends, money, music and even reality television are more important than religion.

It also emerged six out of ten 10 children (59 per cent) believe that religion "has a negative influence on the world".

Drank you very much!

I'd drink it if it tasted good and the calorie count was low. Probably for no other reason, though...
It has to be better for you than sodas, right....?

The success of energy drinks like Red Bull, Monster and Rockstar have proven that consumers are constantly thirsting for a boost. But will they ever want to come back down and reach for a nonalcoholic drink that will help them… Continue

I'm interested in hearing some opinions, serious or otherwise, what the world would be like if there WERE a real GOD. ..All religious scripture would have to be rewritten so it makes sense for one thing..

Respect to Dead People and Life

While browsing ThinkAtheist, I encountered a blog post that called my attention; it was this one, called "Billy Mays... Dead. Four "Celebrities" in a week WTF". While the post itself had nothing wrong in it, the comments seemed more controversial, including jokes about Billy Mays that I considered to be bad tasted. Reggie Hammond replied: "Respect the dead? Why? Will they haunt me? No,… Continue

Everyone knows about Charles Darwin and his theory of natural selection, but did you know that he once ate an owl, just for kicks? Or that he almost didn't make it aboard HMS Beagle because of the shape of his nose? Behold Neatorama's 10 Fun Facts About Charles Darwin:

1. Darwin Once Ate an Owl

Darwin was an inquisitive man. Sure he was curious about nature and all that science stuff, but he's also a guy. So when he saw strange animals, he often wondered… Continue

In this Dec. 6, 2002 file photo,TV pitchman Billy Mays poses with some of his cleaning products at his Palm Harbor, Fla., home. Tampa police say Mays, the television pitchman known for his boisterous hawking of products such as Orange Glo and OxiClean, has died. He was 50.

By MITCH STACY
The Associated Press

Faith of the faithless

This, and so much more, was also posted over at my blog, Cubik's Rube.

Let's own up to a dark and terrible truth.

We atheists all know that we have just as much faith in unproven superstitions as the religious people we so gleefully despise. I mean, secretly, we're all well aware that our beloved "science" is just another way of seeing the world, dependent on at least as much blind belief as, say, fundamentalist… Continue

I've been writing for a long time now. My track record is damn good. I've never been rejected for a piece (though I haven't always gotten my first choice publisher.) It's been smooth sailing. Pretty much I write something, send out a query or pitch and then it goes away. A check comes in the mail to replace it. Yay.
Now, I've never attempted something as big as a book before. Frankly, the prospect of writing one was pretty terrifying. I've gotten over it. Book is written and now in the… Continue

Isn't this a little on the illegal side????

How long has this person been driving like this????

There’ll be no tent for God at Camp Dawkins

Camp Quest, which was founded as an alternative to Christian camps, will teach children about evolution
Lois Rogers
source: http://www.timesonline.co.uk/tol/comment/faith/article6591231.ece

WHEN schoolchildren break up for their summer holidays at the end of next month, India Jago, aged 12, and her brother Peter, 11,… Continue