My reply to the baptists

Ok, so just about a day or two ago these people from the old pueblo baptist church out here in tucson tryed to leave their little flyers on my doorknob.  I didn't see them put it there, but when I stepped outside the house I noticed the flyers on the doorknob.  So I just put them in my backpack, and decided to look at them later.  So then after awhile I decided to write a response back to the pastor about leaving that stuff on my doorknob.  Here's my response back to the pastor, it's a 7…

'Call to conscience' should be to reject Marx http://bit.ly/dHfIOD

This is a letter to the editor in a local paper.  The Marietta Daily Journal has been gunning for Kennesaw State University for quite sometime now, accusing the college of being Marxist.  Typical lock step christian fundamentalist tripe stating "It is only when people believe and practice these commands [Christianity] that peoples of all races, languages and nations can live together peacefully and lovingly."  In my opinion, this guy (and this paper) desperately need an…

Yesterday, at NCU, William Lane Craig and Lawrence Krauss took it upon themselves to debate the possible evidence for God. Dr. Craig lists 5 premises which he believes points to the existence of a god, with #5 pointing to the existence of his particular god.  These premises are:…

A Visit From the Fundie Family

So, I just had a visit from my fundie grandmother and my little cousin who is the same age as my daughter [age 3]. I'm sure the mother of the little boy know I'm an atheist but not my grandmother (unless she's told her which is possible).

The visit was going good with no mention of god or the Bible. Then it came...

My daughter just stared at him… Continue

I feel a bit shady posting this as my very first blog; I blog on my other site (greengeekgirl.com) and rarely think to migrate the blogs over here. I'm looking for a few intelligent readers, though, so I'm pressing on!

Note: This is absolutely and positively an attempt to get cool new members for my book group.  But don't be fooled--I'm not mass-spamming this all over every site that I visit.  I'm concentrating my efforts on the few sites where I will find intelligent,…

Yahweh and  Asherah! what a cute couple!…

While I may have a strange optimism for the future of humanity, and I think that the answer lies not in the division of the religious and the secular but in the joint efforts of all involved, I still see it as a troublesome proposition. As you may have seen in the…

A strange optimism has overcome me today. With all the disasters and unrest around the world right now, you might call me crazy, but hear me out and you may agree with me.

We tend to be a very self-centred and self-interested lot, us humans, and we will always try to look after our own immediate family and community, forsaking the rest of the world in favour of our own…

A fool hath said in his heart…

1The fool hath said in his heart, There is no God. They are corrupt, they have done abominable works, there is none that doeth good.2The LORD looked down from heaven upon the children of men, to see if there were any that did understand, and seek God.
3They are all gone aside,…

A weak argument for Atheism

"The invisible and the non-existent look very much alike." Delos Banning McKown

This quote has been appearing on Twitter from numerous accounts with the hashtags "#atheism #air" appended to the ending. This does one thing, and it's not in favour of the intended or original meaning or context of the quote. What it illustrates is that atheists… Continue 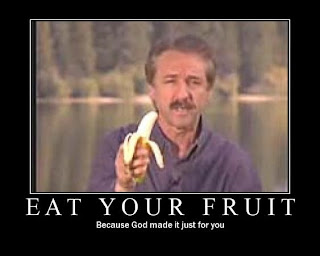 For those that may be unaware, the "Banana Man" aka Ray Comfort, is an evangelical…
Continue

Survival bunker sales are up 1000%. So many people believe the end of the world is coming in 2012 that sales of bunkers and underground living quarters are selling like hotcakes. Mostly a result of the quake, tsunami and nuclear disaster in Japan and greedy contractors willing to cash in on irrational fears.…

An Argument Against 'G'

An essay by – Heather Spoonheim

The habitual capitalization of the word ‘god’ is evidence of one of the most insidious mind-games ever perpetrated by the cult of Yahweh. To understand why, one must first understand that language, as a…

great article on the SSA! A must read for optimistic atheists

I just have to share great news when I read it, and this recent article concerning this relatively new student organization's progress brightened my day.  I hope it does the same for you guys.

"Nothing demonstrates this point more clearly than the rapid growth of the Secular Student Alliance, the umbrella group for organized atheism and humanism on college campuses (and now high schools as well). SSA chapters have grown from less…

A Quick Thought Before I Sleep

Sometimes I like to think that good things do happen for a reason, like there truly is some manner of fate pulling on our strings. But then I thought... Why can't good things just... Happen? Who is to say that the physical laws of our universe can't simply create an event that I perceive as good?

Some people try to imagine a godless universe and suddenly everything is terrible. But really, the only thing that has changed is your perspective. There is still good, still bad, and your… Continue

Here is your opportunity to tell me where to go next (‘To Hell’ isn’t an option).

For the first time in this project, I’m giving the direction of my travels over to the whims of other people.  Namely, you.

I love the responses about the magazine! I knew there would be some creative people on here just itching to get some of their stuff out for others to see.

The plan is to get a pool of talent together and once there are people who will be serious about this involved, we'll get to particulars. Right now I'm trying to wrangle some folks (we truly are like herding cats!)to see how much content can be created. If you read this and are interested, message me, reply to this, twitter me,…

My generation has been dubbed "the millenials" because we seem to have "come of age" [roughly] in the first decade or so of the new millenium. I am in the "generation y" part of this large generation of young people who face a problem that our parents didn't face to nearly the degree we do now. Funding College. In America it doesn't seem to matter whether the millenial kids go to public or private 4-year colleges, make no mistake! Unless you are REALLY poor, REALLY lucky, or REALLY a "when…