You'll never guess who did it this time...

Another grotesque adventure for the religion of peace. You don't even have to read the article. You know everything there is to know in the headline...but here's the link to the article if you really need it.

50 people murdered in a gay club massacre in Orlando 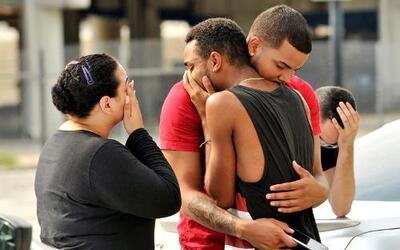 I have made a few attempts at writing something but it is difficult to articulate anything meaningful to such a meaningless crime against humanity. For now and for what it is worth, I just wish to extend my condolences to the family and friends of the victims.

Before seeing the NYT headline today about Trump using this incident to get support, I predicted that he would do just that.

Here we go again, fear mongering to get support for whatever knee-jerk reaction/crusade politicians can get away with.

They are asking for blood donors. But NO GAY DONORS, PLEASE!

Two paragraphs from that article:

Some in the lesbian, gay, bisexual and transgender community used social media to plead with heterosexual people to go in and donate blood on behalf of those who can’t.

While gay and bisexual men may be sidelined from giving blood, there was no shortage of others willing to step up. Lines were out the door Sunday from members of the Orlando community eager to help.

BTW, it's nearly certain that at least a few of the dead/wounded will be straight women. Many straight women like gay bars because they can go there with female friends to dance, drink, and have a good time without being hit on by men looking for a one night stand or a back alley or parking lot quickie.

So was Sandyhook. Remember saying the same thing then too. He used an AR-15 too.

So were the many other cases of nut jobs killing innocent people with their legally, store bought guns.

When Australia suffered through the biggest massacre on record, 35 people killed, government stepped in and clamped down on the purchase of guns. Up until yesterday Australia probably held the record. Now, instead of thinking of mass casualties, caused by a nut job with a gun, and thinking "Port Arthur, Australia" we will think "Orlando, Florida, USA".

Unlike Australia our elected government stooges, who are in the pocket of the NRA and the gun manufacturers, no such thing will happen here. Just business as usual because gun sales mean big money. Right about now, 7:00 am EST, there are thousands of men wanting to be the first to walk into a gun shop and purchase more guns. Happens every time one of these horrible events happen. Gun sales go through the roof. And it's not because they're gay, heard the news, and are fearing for their lives; they're buying them because they're scared that his incident is going to bring about a repeal of the Second Amendment. Something that will never happen. Forget repeal, they think it's going to bring about the elimination of their favorite weapon, and preferred weapon of nut jobs everywhere, the semi automatic rifle, or as they affectionately refer to them the AR-15, AK47, etc.

I feel sad today for the 50 families who lost someone to this senseless act. To the wounded and the families of the wounded. I feel sad for my country. We are powerless to stop this from happening again. It will happen again and we will be once again talking about how sad we all are. But we will do nothing about it. I mean even here, it's not like we can "pray" for the victims and their families, which is the bandage that the politicians use every time this happens. We've got to do something!

Neither Oz nor the US holds the record.  Norway beats them both, since Anders Breivik killed 77 people.  You don't hear about him any more because he doesn't fit the narrative of "mass shooter in a country with relatively little gun control.  And for what it's worth the Paris massacre was far worse, but I guess some wouldn't count that because there were multiple gunmen (if that's the criterion, then Columbine must also be eliminated from the list).

What mass shootings like this have in common is NOT that the country had weak gun control laws at the time they happened, but rather that the victims were rendered incapable of defending themselves.  In the present instance, Florida has a system whereby you can obtain a permit to carry a concealed gun, BUT it's forbidden to do so inside places that serve alcohol, like nightclubs.  Either a) people planning a mass shooting know this and preferentially target such places or b) they don't, but those who happen to hit places where people can defend themselves get cut down before they can kill 4+ people (which seems to be the arbitrary line drawn between this sort of incident and others), thus creating a self-fulfilling statistic--prevented mass shootings don't show up as mass shootings in the stats.

In any case the average weekly death toll in Chicago from gang attacks is 20+ (there are hundreds of shootings every month, but this is the stat for fatal attacks) but no one seems to care about that.  Perhaps because the cause is too obviously the gang culture.

I'm also wondering why this shooting went on for a full three hours before the police did something. Was the shooter killing more people during this time?

Also, don't clubs like this have armed security? If so, where was he? Or are they (a) not allowed to or (b) did the club management buy into the notion that you're in more danger with guns around even if it's "a good guy with a gun"?

Supposedly there was armed security and he, being openly armed and wearing a uniform (much more conspicuous than the gun), was spotted and taken out instantly.

I know of many places who have a uniformed, but unarmed security guard, which can be just about pointless.  Furthermore, one of these is a place that has received death threats; a Charlie Hebdo type scenario (though not from Muslims) is not out of the question in the least.

I'd maintain that a thin layer of uniformed security, even if armed, isn't the way to go--some of the people ought to be trained and should have weapons available in case someone gets past the one security guard--yet this place proudly announces there are no weapons there.

I have heard the three hours thing discussed. It turns out he claimed to have an explosive vest and he was with hostages, so that kept them from attacking for a while. That turned out to be false. Maybe it took the three hours to figure out it was a bluff, perhaps by being in contact with some of the people trapped in the building. Perhaps they were trying to get a negotiator involved.

I don't know. Seems like a hellish three hours for the people trapped in the building.

One thing I hope comes out of this going forward would be that anyone opening any business where people gather in large numbers needs to have more than a front and back door for exits, which is why so many people got killed: they had only limited options for exiting.

Thanks for pulling me up on the record. Wrote that while emotionally impaired and never  thoroughly researched it.

You're right. If everyone in that night club was armed the toll would have been less, as far as the shooter's body count is concerned. Dark night club, loud music, people running, mayhem and everybody is firing their weapon. That's how the scenario plays out in my head. It's a bar also so people are drunk and probably some are high. So accuracy suffers more. Most of these people in the club with guns probably would not be regulars at the shooting range so would I trust them hitting the guy doing the shooting while said asshole has my daughter or someonelse's kid next to him?

Trust me, I can see your point. Despite the fact that it took a squadron of police and swat and anti terrorist law enforcement to bring this guy down with flash bangs and a fusillade of automatic weapons fire. You can hear it on the video. Same with the guys in France. It took the leveling of a building and hundreds of thousands of rounds to shoot or kill four guys holed up in a building. Not to mention, some of these assholes wear body armor on their killing sprees so if said asshole was wearing one a patron at the club with a Keltec will probably bounce the bullet off the vest and draw attention to himself.

The average weekly death toll from gang attacks in Chicago. 20+ what? Innocent bystanders or 20+ gang bangers? I just don't see it; the correlation between gang bangers in Chitown shooting each other and innocent people being mowed down because of their sexual preference.

A lot of the Chicago victims are bystanders as some gang bangers duke it out.  I don't care much about the gang bangers; if you choose to live by violent predation, you can die by it as well.

As for the lack of practice, there are plenty of instances out there of people shooting and hitting with little or no training.  States with a permit requirement generally require some training to get it. On the other side of the coin, the NYPD is notorious for hitting far more bystanders than bad guys, if I ever see twenty cops trying to subdue a random homeless man there. I'll run like hell.

[As of right now, all fifty states plus the District of Columbia either have a permit process in place, or don't require a permit.  Some don't require a permit but will issue one for use in other states--there's a patchwork quilt of "reciprocity" agreements out there and that's literally a state-by-state thing.  (http://www.handgunlaw.us/, click on a state to see who will honor its permit, if it issues one.) Handgun laws are just about as complex as knife laws.  Some of the states (as well as DC) leave issuing the permit to the discretion of the issuer ("may issue") and notioriously, you can't get one unless you're politically connected.  Sometimes people sarcastically refer to them as "won't issue" and examples would be most parts of CA, NY, MD, CT, NJ and DC.  Most are "shall issue" where the issuing authority (usually the sheriff) must issue the permit if you meet the legal requirements, generally passing a background check and taking a class.]

In the present instance, people are wondering why the police sat there for THREE HOURS "negotiating" with this guy, when by all evidence he'd shot everyone within the first ten minutes.  People who otherwise might have lived certainly bled out during this time interval.  They basically treated a massacre as though it were a hostage incident.