http://www.foxnews.com/scitech/2010/07/14/chicken-egg-mystery-final...
Read it - what a bunch of idiots! Their "scientists" are saying the chicken came before the egg, but dinosaurs were laying eggs millions of years before the chicken ever evolved, not too long after I did.

Is how to sum it all up?

How do I dumb it all down so that a person that hasn't been involved in academia or science for two and a half decades can understand?

How do I explain the difference between 'conviction' and 'conclusion' to someone that can't grasp that concept?

Misty:  I read the "Watchtower" info you attached.  Essentially, it makes the argument that it is highly unlikely that all these factors came together coincidentally to make a planet ideal for US.  The problem with that line of thinking is that it presupposes that there is something special about us.  You could pick any entity, living or dead that exists anywhere in the universe and make the same argument.  If you were a sentient blob of some kind, somewhere far off in the cosmos, you would tend to think that everything was made just for you.  To put it another way, everything that exists is due to a combination of factors.  Those factors are either directed or they are not.  If I throw a handful of dirt in the air, the pattern it makes when it lands on the ground is either directed or it is not.  In the sense that I initiated the action that resulted in the dirt pattern on the ground, it is directed.  However, I did not plan for that dirt to fall in such a way that it formed a predetermined pattern; in that sense, it is not directed.  All life on Earth is like that. It has a particular pattern - a very haphazard pattern, it appears, since all life eventually succumbs to entropy. By the way, why did God create entropy?  The world and the universe, if it was directed by some sentient intent, is constructed as perfectly for that chunk of antimony lying  by a gelatinous glob in Star 747-B3290, in Galaxy 587019B as it is for us.  What religionists just can't accept is that there is nothing special about us, except in our own anthropocentric imaginings.  It may well be (and, in my opinion IS) that we are unique.  But so is everything else.  To be consistent, religionists must suppose that EVERYTHING in the universe was created by God.  Okay, but what evidence is there that He/She/It created the aforementioned Star 747-B3290, and everything else just for OUR benefit?  There is none.  Man only IMAGINES that he is special.  So he invents a special deity that happens to resemble him, and who decided to make Man in His own image.  Did He also make that chunk of antimony lying next to a gelatinous blob in His image, as well.  And if he didn't, why did He make it at all?

FYI:  most of the founding Fathers were deists.  A deist is someone who looks at the universe as likened to that handful of dirt I mentioned.  They believe some kind of god just threw everything into the air and it came down, UNDIRECTED, as US.  I don't believe that, of course, but if I chose to believe in a god, that would be mine.  That's why I had my mother's funeral conducted by a Unitarian.  She believed in God and I didn't.  The Unitarian funeral was a compromise between respect for her and for my own principles.

Doubtless, for millions of years, the dinosaur felt the planet was created especially for them, until the meteor hit -- 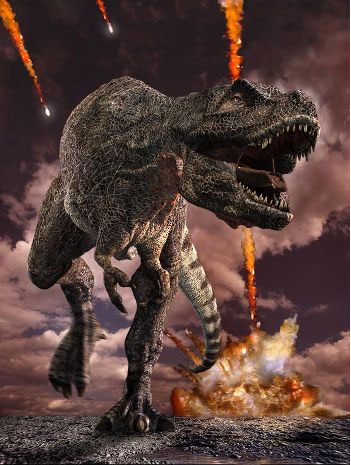 I got THAT message a looooong time ago --

Perhaps that was the DinoRapture....

Actually Chuck Norris happened to the Dinosaurs. Just a few roundhouse kicks and it was all over.