Did you all see this?

A young boy "fell" into a zoo exhibit with a 17 year old (endangered) silver back gorilla.

The zoo had to put him down to save the child's life.

Many MANY people are outraged by this. I wonder what they would have said if the boy had been killed instead?

People are saying things like "it was not necessary" and "the mom should be criminally charged"...

What do you think? Did the zoo do the right thing? Should they have done something different?

I think they saved the boy's life. You don't need to be an animal expert to know that while he was "protecting" the boy, his mere strength could have injured him if not killed him.

Is our society just going crazy? Why is everyone up in a frenzy about the gorilla instead of thanking them for saving the boy's life?

Stop being influenced by King Kong.

That is exactly what I am saying. The impetus was on the zoo to get the onlookers to STFU. The gorilla was not going to harm the boy. He had every opportunity and could have dispatched the child in a second.

Chimps are more like us. Read Fossey, I think that was her name who was ultimately killed by poachers but did the Jane Goodall thing and described the essentially pacific nature of gorillas .

But please watch the vid and hear the analysis of a primate behavior specialist. It is exactly my interpretation which makes it correct. That poor gentle giant was murdered.

The gorilla was not going to harm the boy. He had every opportunity and could have dispatched the child in a second.

That is horse pucky. It assumes something you can't possibly know. Namely that if the gorilla was going to kill the boy he would have done it immediately.

One gorilla expert said he wasn't treating the boy like a baby gorilla, he was treating him like a toy. When male gorillas get nervous and excited, they will often grab a branch and drag it around just like he was dragging the boy around.

Jeff Corwin, who i think counts as a major animal lover, offered that, gorillas are so powerful that a big silverback like that could easily have killed the boy unintentionally.

So, to quote you again, "he could have killed the boy in a second." That second could have come anytime and then all the habitual self-appointed animal "experts," backseat drivers, and second-guessers would be arguing the opposite side.

The burden Is on you to find precedent in which a child falls into a gorilla exhibit and the gorilla kills the boy or something analogous. Instead we know the opposite is true. Gorillas have saved/protected.  You don't just murder an animal like that cuz what if...

You want assurances? Cut it out. Nobody knows except god what is gonna happen. If a child wanders to a bum on a bench should we shoot the bum just in case?

Jeff Corwin aint making sense to me. The gorilla is aware of its strength and what it is doing with its body. He is not going to kill a kid unintentionally.

There are so many unwarranted assumptions here it's hard to know which to tackle first.

The burden is to spare the child even POTENTIAL harm.

Lions and tigers have on occasion restrined themselves from attacking people, too.

We expect even "bums" (wow, what an antiquated and prejudicial term to use for a homeless human) to act humanely and basically predictably. At the same time, we probably try to keep our kids away from unpredictable strangers.

A gorilla aware of its strength? "I'm strong," the gorilla says to himself in a cartoon balloon over his picture in a photo.

A gorilla can kill a kid unintentionally.

BUT, I'm just remembering: You're the joker who likes to stir things up with his outrageous comments.

As long as we're arguing from authority here, here's an expert (who can beat up your expert), who says the boy was indeed in mortal peril:

Permalink Reply by Logicallunatic on June 1, 2016 at 10:26pm
@jakelafort. Did you not watch the video or are you that stupid? It's a 400 lb gorrila dragging around a 40lb child like a ragdoll. You can see the kid's head bouncing off the ground you nutcase.

Watched perhaps five times. Look at my link and listen to the primate specialist. Her viewpoint mirrors my own which makes it correct.

I can't believe that everyone has missed the obvious!

But the zoo had a choice between a rifle and a tranquilizing gun. Which should they have employed? Easy! BOTH!!

Train the rifle on the gorilla's head. But Shoot him with the tranq. If he reacts badly, kill him. If not EVERYONE lives happily ever after.

If he reacts badly, kill him. If not EVERYONE lives happily ever after.

You need to watch some videos of animals being tranquilized. The dart hurts and startles the animal since it comes out of the blue. The gorilla's reflexive reaction on its own could have killed the boy.

The animal weighed 450 lb. and while no one has yet measured their strength, even a chimp is several times stronger than a strong human male. Remember the woman whose face was torn off by just a chimp? 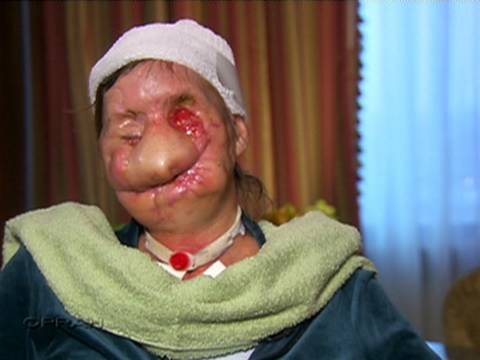 A gorilla is many times stronger.

Post all the horrific but irrelevant troll fodder you want. My solution would have entailed virtually NO additional risk. Sure the animal may have been startled by the tranq. What would lead ANYONE to believe that he would take it out on the boy - especially given his behaviour up to that point. And with a rifle trained on him, he wouldn't have had any more opportunity to do harm than he had the second the boy fell in. Chances are better that he would have ignored the boy to tend to his own "wound".

I agree with you although admittedly your solution would not have been easy to conjure in the heat of the moment unless there was a protocol for such unlikely events.

You're right, but it surprises me that such a two-pronged response does not feature in the protocols.