If God does not exist, then what is lost by believing in God as long as it makes life easier

Hi, I'm an atheist who was raised secular, but I have attended religious services with people from many different backgrounds. Now, I don't dislike anyone who believes in God. In fact, I love to talk to people about what they believe and what inspires them to follow the God they have chosen. However, no matter how many people I talk to, the conversation almost always ends with the same argument: that, if God does not exist, then what is lost by believing in God as long as it makes life easier?

I've lost respect for many people based of this answer, since it seems to me that these people don't care if they lose their self respect in the process of making "life bearable" . Its like saying its ok to believe in Santa Claus for the rest of your life, even though he never brings you presents, because at any time he COULD bring you presents and you also have someone to blame for NOT getting gifts. And if he never brought you gifts, what does it matter? You apparently were happy about wasting you time waiting for him.

Is there another way to think of this logically? I would like to know what you think about this argument. What, if anything is wasted by believing in a God that doesn't exist. Is there any reason to compartmentalize the pain that exists in life so much that it creates a false God?

I refer you to the following as a start:

Though not your own words, your response was so much more complete than mine. :D

#1 It is dishonest. You can not believe something that is not true without lying, at least to yourself.

#2 Claiming any religion is true without evidence lends more support to something that doesn't deserve it.

#3 Much is lost when believing in a god that is not real, especially if the god you are choosing to believe in demands animal/human sacrifice and tithing to a power structure built on a lie.

had to reply on this, since i'm currently living in Indonesia...

the total BS-ness if religion have a positive impact is beyond 100% chart...i could say there are few bloodshed localized war due religious sparks..you may find it if you search..at least i know there are 2 events occurred in my life time (and i'm still under 30)  which left many people died, man woman and even children.

the only positive impact is towards the same religion population.

and as for myself, religion is only have negative impact..as many people have used it to gain political positions, to gain defense of action against some "foreign" matter, to influence others standing ground, etc.

To me the counter to this argument comes down to whether it is really possible to will yourself to believe in god.  I know I was never able to do that.  I suppose for those who are able to believe, believing might make life easier.   For example, I am an incredibly anxious, worrying sort of person and since I've had kids I've poured all my neurotic worry into them!  (Amazingly, they seem to have grown into quite well-adjusted young men.) So, maybe if I believed that god was in control and that everything would work out according to god's plan, etc I might be more relaxed.  (But I doubt it, religious mothers, in my experience can also be anxious and neurotic about their kids.)  Or, I suppose if your life really, really, really sucked the promise of an amazingly wonderful afterlife might make you feel better (so long as you believed that you were good enough for the amazingly wonderful brand of afterlife and not the other brand).   But that is all supposing that you actually have the capacity to believe.  For me, it is not just in my DNA, so to speak.  Is it possible to will yourself to believe?

As an ex christian, I can try an give you a picture of what it's like: I'll use myself as an example.

A deed is done that causes me to feel worried that I'll be caught. Lets say I cheated on my wife.

Now the worry drives me nuts, constantly listening for any clues that the wife might suspect something, hoping that none of my friends will tell her what they know etc.

Now If you are a religious person, all you do is you pray to god to forgive you (not the wife!) and then you "leave it in god's hands" - those magical words!

Then you can safely put these worries out of your head and get on with living as if nothing happened. THAT my friend is exactly the relief religion can bring. You no longer need to feel quilty!

Of course it all comes crashing down when the wife finds out. Strangely the courts do not accept the fact that god forgave you this sin as reason to give you the car and the house :-)

"If god does not exist, then what is lost by believing in god as long as it makes life easier?"

Well, for starters, a whole lot of mental and emotional energy that could be better spent on making life easier for others as well as yourself.  And as other posters pointed out, there's the matter of honesty and self respect. The days when herd mentality made up for the lack of both are ending with the greater public  presence of atheism, which means that believers are spending more time trying to justify why they believe  what they do--and given the touchiness believers are exhibiting these days (if it's not just me who's running into this phenomenon), the self justification thang ain't going too well.

There is no reason for anyone to compartmentalize pain of any sort--the best way to deal with pain, assuming you don't want to wallow in it, is to let it out and confront it openly.  Needless to say, religion doesn't exactly help with the process of rational management of life's pains; in fact religion thrives on them.  And thus there is no reason for religion to actually deal with life in a constructive manner.  As nonreligious ways of dealing with pain continue to bear fruit, perhaps some of the religious will see there are secular solutions to life's problems, and the "need" for religion will continue to slowly lessen.  And so the glacier continues to move down the slope...

The FSM, of course.  I take the wager very seriously...

May we all be touched, blessed, pacified, etc. by noodly appendages 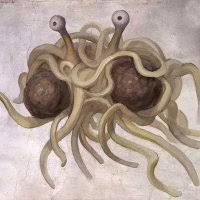 I would start by asking how would believing in a god that doesn't exist make live bearable, you explain that quite well with the Claus analogy, so i'll leave that there.

I think that the harm in believing in a non-existent god is proportional to the amount of influence we let such believe affect our lives. For example, in times of grieving someone might handle it by going out for a drink, meditating, hugging a stuffed animal given by the loved one, others undergo into personal fantasy, while others pray. would prayer be regarded as illogical or harmful compared to any of the above? My answer is depends on what are you intentions in any of such actions. And should prayer be regard as better than any of the above?

But when you consider such non-existent god the foundation of your live, your morals and decisions, and consider them superior to any other opinion or facts there can be a great damage limited only by willingness and morals of the individual or the group.

Then we have the role of religion and theology in a world where god is non-existent, Why should religion spread and maintain rules that has no source whatsoever? If they base their teaching in evidence and well reasoned arguments, why encircle them in dogma and actions that has no effect in real world? Why would it be better a theologian or a priest representing a non-existent god to a philosopher or a scientist regarding morality of a new found situation (like human cloning for perfect organ compatibility)?

So, the only thing left is the believe in an individual and personal god that doesn't exist and whose only function is soothing in times of misfortune. In that situation, why would it be better than a stuffed animal given by a loved one, go out for a drink, meditating or play a game?

In conclusion, i don't think there is a rational reason to believe in an non-existent god, any soothing action that could be achieve by having that believe can be obtain without going to the supernatural. The only thing we have to do is try and find an activity that work best for us.

The question is obviously directed at unbelievers. If you really believe, the point is moot. I can understand pretending to believe, as a great many atheists do in the deep south, or in other theocratic regions. It makes alot of sense in that situation to keep your head down and shut up if you want to have a happy live. Or any life in some cases.

As for deliberately believing, just to be happier, even when you don't really, honestly believe? I think most of us ex-Xtians went through that phase for a little while at least while we were figuring out our own thoughts on the matter. The cognitive dissonance that it engenders is profoundly uncomfortable, and I don't think anyone can live with it for an extended period & remain sane.

What is lost by compromising your inner self just to get along? How about the honesty you treat yourself & others with. That's dead, and your self-respect goes along with it. Integrity is a thing of the past. The freedom to live your life as you wish, unbounded by the strictures of some repressive cult is gone. (I think the question implies that as well. If the religion in question is liberal & open, there's probably little social pressure to join or suffer.)

If this is the question your religious friends fall back on, I'd lose respect for them too. What a sorry  state of mind...