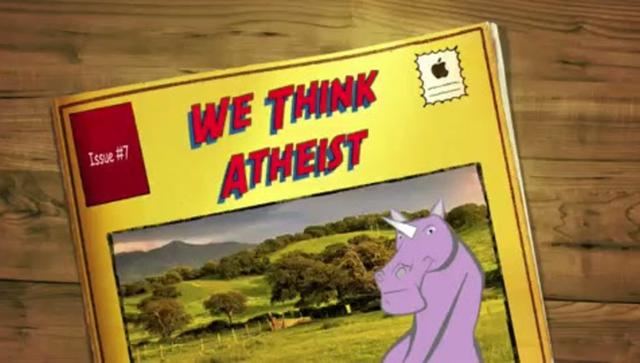 Quite some time ago a selection of videos were posted to Think Atheist, YouTube and other video sharing website on "Why We Think Atheist".  Most of such videos were about why the video blogger in the video questions religion, does not agree with religion, or simply prefers the scientific method of thinking. Of course there is nothing wrong with that, we should all question everything and support science and all of its achievements and so on.

But is that it? Is that all we are to be? Surly there must be more to us atheists. At least from an individual perspective. Granted all it means to be an atheist is not believing in God or could argue that this extends to not believing in any form of superstition. I'll accept that.

But what about the members of this site as a community? Surly you must have noticed that on a frequent enough occasion, you will see a post in which will receive the response "This has already been posted". Well of course it has. How many different ways can we possibly express that religion is corrupt, or creationism is a sham or such and such a faith is a cult. Its all been said before. Maybe you might be lucky enough that someone might add a slightly different perspective on the issue, but that is incredibly rare in the long run.

I don't want anyone to get the wrong impression form this post, I'm not dissing Think Atheist nor am I saying anyone should not question or debate religion. Think Atheist is a fantastic forum and we all should continue to question everything.

But what I am saying is that maybe members should think about posting more discussions in the side categories. I suggested that Morgan add some extra categories quite some time ago, and he was very good to do so.

The way I see it, is like this. If you go on to a rock bands fan forum, users don't just talk about the band. While the band is not on tour or there is no new album coming out, users tend to discuss the side topics. And we can do the same on Think Atheist. All I am saying and suggesting is that members think about promoting a little more variety on the site.

But of course this is just my opinion and I'm interested to know how the rest of you feel about this. What are your thoughts on it?

Myself and Unseen where the very members who suggested it to Morgan in the first place. From what I understood it was Morgan who approved the decision. Feel free to correct me if I'm wrong here. But there was an older thread posted a while ago about the lack of activity on Think Atheist. From what I remember I suggested that more categories for alternative threads could be added to boost activity. Unseen, more or less agreeing with me made the point that he sometimes finds it difficult to categorise certain threads. I'd link it to you, but I can't remember what the thread was called exactly.

While I respect the rules, part of the point of this thread is to challenge them for the improvement of this site. Although guidelines is probably a poor choose of words, perhaps it should be called a community code or something (if these guidelines are in fact compulsory and not mere suggestions)

I agree they should be called something other than guidelines.

The Groups are actually intended to be areas in which all things off-topic can be discussed. If you want to discuss Javascript with fellow atheists, create a group. If you want to draw in members to join, you can contact a moderator or administrator to to see if Think Atheist might help promote it.

In the guidelines it states that blog/discussions topics can merely relate to atheism/science/freethought etc... so certainly the social issues mentioned above can be discussed here. It's hard to link a discussion about Javascript to atheism, but it would be easy to relate female circumcision or civil rights issues in general.

The site is meant to be a resource for atheists. We do allow a broad range of topics to be discussed, but Reddit would be better suited for random, non-cerebral conversations. Again, if you want to discuss niche interests, peruse the groups.

We do update the guidelines from time to time so the moderators/administrators will look into improving on them.

Any topic is game on this forum ... obviously ... as long as it relates to Atheism. Some people need their daily dose of theist-stupidity to stay strong and non-believing (though obsessing over it is probably not wise). Not everyone lives in a liberal-nordic-atheist wonderland ... unfortunately. :(

Posts can be made about just about any topic provided it falls within our rules and guidelines.http://www.thinkatheist.com/page/think-atheist-guidelines

Going around trying to find fault with our policy is not a way to get changes implemented.

Our moderators and admins are all long time members some from site inception.We hail from a diverse background from all over the world.

Think atheist has over 18000 members and less than 10 moderators/admins. We have managed just fine with our policy since 2008.

If you have a problem with our staff message me directly.

In the last five days there have been posts on: work place safety, separating the artist from their work, free will, unions amongst many others.