This may sound like a weird topic, but as most of us have a common interest in science to some extent, I think it will be interesting to examine ancient inventions, some of which are scarily advanced. Take Crete, which had an advanced septic system and cesspool for flushing toilets in 2500 BC, before even the Greeks, yet we didn't rediscover that technology until the 18th century.

Some thoughtful questions if you're up for it:

1. Why is the invention you like important? Why is it cool, or revolutionary for its time?
2. What use did the invention probably have?
3. Do you think the progress for the invention's improvement was stopped by the Dark Ages?
4. Did the inventor face criticism in their time for their ideas?
5. Do you have a favorite ancient inventor, mathematician, et cetera? 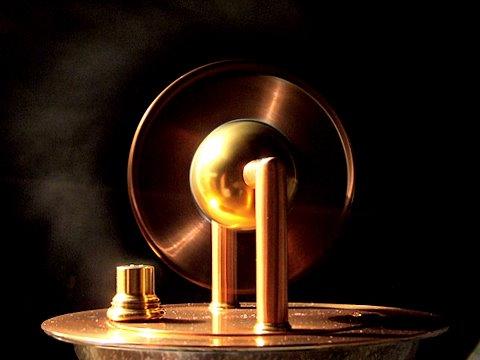 Actually a steam reaction turbine, the Aeolipile was invented by Heron of Alexandria in the first century A.D.  In modern times it is often referred to
simply as "Hero's Ball".  This ingenious device was described in detail
in Heron's book Pneumatica.  A fire beneath the cauldron
boils water, producing steam which is conducted through one of the
copper supports to the pivoted brass sphere.  This steam issues from
nozzles at the ends of the two small opposing arms on the sphere causing
it to rotate.  This little replica spins almost silently at 1500 RPM
with a steam pressure of only 1.8 pounds per square inch, producing
surprisingly little visible exhaust.


The secret of Heron's invention was in the bearings (the only high speed
bearings of his day were probably on the wheels of a cart).  In the
Aeolipile only one of the supporting arms carries steam into the sphere,
through a sleeve bearing.  Since there is no thrust bearing on this
arm, steam pressure pushes the sphere toward the other arm containing
the thrust bearing.  That arm is solid and has a conical point, bearing
against a conical indentation on the surface of the sphere.  Hence the
rotating sphere is held in proper position.

The steam ball was actually only a hair's flutter away from becoming the basis for a steam engine, which would have kick-started the industrial revolution during Heron's lifetime. This isn't the only absolutely fantastic invention this man was responsible for, but I will leave his even more astounding ones (such as his experimentation with "computer programming" in a way most of you probably wouldn't think!) for anyone who may want to post about them.

Permalink Reply by Ava Wilson on October 10, 2010 at 10:07pm
Heron's inventions were less practical and more theatrical. The steam ball could have revolutionized the world beyond even the hydraulic screw if he had realized its potential, but he referred to it as a 'toy' merely. To me his greatest invention was his theater, which was completely automated with no need for actors or props, and was one of the first examples of computer programming in the world. He would put nodes and notches on a rod that would spin, with rope wrapped around the rod across the nodes. This would cause the spin to sometimes reverse. When each respective part of the rope would be released, it would cause a different task to initiate. For instance, a ball rolling and weighting down a lever that would let loose many little balls that would sound like clapping thunder for effect.

He invented coin-operated water dispensers, which is the same technology in modern day vending machines.

His use of hydraulics was also theatrical, for instance, his hydraulic organ.

Permalink Reply by Ava Wilson on October 10, 2010 at 10:09pm
Wonderful reference. Much as I abhor religion, I think it was an evolutionary 'necessity', or inevitability at least, when dealing with cognitive creatures who have the ability to inquire and reason.

Permalink Reply by Michael on October 14, 2010 at 9:22pm
I am not convinced based on the DNA evidence that they were we. Moreover, songs and legends from the age of the Megafuana are mysteriously absent in myth, song and lore. Yet in practically all cultures now living there is a flood myth. I am convinced that we are the last genesis of man upon the planet and the prior genesis, of the various species of men of Megafuana, was destroyed by a cataclysm. Most likely an asteroid.

Permalink Reply by Ava Wilson on October 14, 2010 at 11:50pm
I don't know about an asteroid. There is strong evidence that a supervolcano probably caused a bottleneck in the population (around 60,000 years ago, one erupted that would sort of fit that time frame, although another erupted as soon as 1800 years ago I've read, probably not as serious [albeit the most serious ever recorded by man]; and we already theorize that if Yellowstone's caldera erupted, it would cause years of famine and darkness, and therefore a bottleneck), which could explain that. But as far as the flood myths, most theories I'm aware of state that likely it was only the 'known world' of the time, not the actual earth, that flooded. That is, the Mediterranean, Nile, Indian Ocean area probably experienced heavy flooding at some point for some unknown reason, and it was transcribed as a 'worldwide flood', when it was only the inhabited world of the time. By 'of the time', we mean stemming back from the very first mentions of floods, back in the time of the Sumerians.

Permalink Reply by Ava Wilson on October 10, 2010 at 10:12pm
http://www.mlahanas.de/Greeks/Technology/AncientGreekTechnology026.... This link shows the mechanics of Heron's automatic theater, the first comprehensive example of computer programming in the world.

Permalink Reply by Ava Wilson on October 15, 2010 at 12:00am
It is possible that the reason the ancients knew so much about astronomy is because they actually invented telescopes thousands of years ago. At least we know lenses in the form of magnifying glasses were invented that long ago!

Permalink Reply by Elizabeth Peart on November 4, 2010 at 6:15pm
For me, the most amazing of the ancient inventions is the Antikythera Mechanism. It was found in a Roman shipwreck and was initially thought to be a clock only. It's only when the remaining section was examined properly that the researchers realized that this wasn't just a clock but an astronomical calendar and solarium, showing the positions of the 5 known planets of the time, as well as the phases of the moon, predictions of leap years and eclipses, as well as the date.

More impressive is the way it was made. initially it was thought that there was no way an ancient Greek workman could, using the tools of the day, make such an intricate set of gears and cogs. Then a horological expert copied some of the mechanisms and proved that ancient tools could make precise gears.

In short, this was the world's first complex calculator. No-one knows who made it or what it was made for.

Permalink Reply by justin gold on December 1, 2010 at 12:44pm
This really was ahead of its time,would like to go to see it one day in the museum,this would be my choice too Elizabeth,Great choice.


1. Why is the invention you like important? Why is it cool, or revolutionary for its time?
A single-stage ship, taking off from Earth, goes out to Saturn or Jupiter and leaves a research station. Goes back to Mars and does the same, and returns to Earth orbit. (1959 design proposal) Designs looked at were tens of thousands of tons at lift-off, built like ocean liners.

Later variants used a Saturn booster stage to lift it to +`85mk, where it fires off the atom-bomb sequence to put it into orbit. Others used multiple Saturn boosters to lift section into orbit, so the bomb pulses wouldn't start below the Van Allen belts, so no radioactive products would come back to the biosphere. This is the one that could still be used with Shuttle-derived heavy lift boosters, or the Russian Energia to lift sections into orbit.
The test-ban treaties were signed despite several protests that it should leave options for non-weapon peaceful uses. This is still possible, since all the signatories of those treaties are space-faring today. a multi-national effort could still make it fly.

2. What use did the invention probably have?
Seeding human presence into the solar system. Research as well as resource use, to make efforts into space more tenable and robust and stronger.

3. Do you think the progress for the invention's improvement was stopped by the Dark Ages?
NASA decided to go with Von Braun's rockets instead. Orion could have left strong survivable and more self-sustainable operations going, instead of a few flags & footprints missions. We have memos from the White House to the State Department in '66 (before we'd even gotten to the Moon) stating a desire to cause a loss of interest in space so the budget could be cut for others things the government wanted to spend money on instead, including specifically
"to mitigate the political strain of the war in Vietnam."

I'd call that a "dark ages" thing.

4. Did the inventor face criticism in their time for their ideas?
Oh yeah!
Stanislav Ulam (Nobel physicist) said "zis is not just nuts, zis is super nuts" about high-explosive test models that flew successfully (while blowing some models to bits). Others said similar things about the basic premise of the proposal, even though it was worked up at General Atomics by Freeman Dyson and many others including atom bomb designers and other top scientists and engineers. They showed that the premise was sound and workable.

5. Do you have a favorite ancient inventor, mathematician, et ceter
I might say Dyson, but he's still alive.
Maybe Richarsd Feynman... I'd have to think about ancient times.