$15 minimum wage: windfall or a case of "be careful what you wish for"?

A movement is afoot to demand a $15 minimum wage, both at the state and federal level.

If it happens, it will mean a better life for many, but will it be a disaster for many as well?

How will businesses respond to a minimum wage that's roughly double what it is now? I suspect this is what we'll see:

1) increased streamlining of workplace processes and the use of workplace technologies to replace workers or make workers work faster, resulting in...

3) greater use of part-timers.

4) a ripple effect of increased prices across the economy, affecting those employees who keep their jobs as well as everyone else.

Still think an increased minimum wage (a living wage) is a good idea?

For many years now we have been following trickle down economics as the compensation for executives and shareholders has continually  increased to ever new heights while their taxes have been cut again and again. After all these many years where bonuses and pay to these people have increased out of all proportion to the normal worker  should we  not  now be living in a utopia if it worked?

And so, raising the minimum wage will do what?...

It will put more money into the base of the economy, which would give people more money to spend ,which will in-turn create new niches for more businesses or allow existing businesses to expand.

I might add that increasing the minimum wage will also take some of the burden off emergency rooms, helping to reduce the cost of health care, though Obamacare will do a lot of that as well. Obamacare will fail if younger people don't sign up for and opt to take the penalty instead. They should consider opting in an investment in healthcare of the future.

If this chart below is true, then something stinks. I suspect it is accurate because now 80% of all Americans own just 15.6% of America’s wealth. The bottom 40% of Americans own less than 0.5% of the wealth. Basically in debt. Of course Lotto doesn't help, but it gives 'em hope.

I suppose that a business owner would laugh at the idea that workers today work harder than they did in the past. Rather, he'd say that workers are lazier than ever and that any gains in productivity are due to various procedural officiencies and advances in technology.

A business owner with an attitude like that wouldn't do well against competition who's managers inspired their workers to do great things. And efficiency advances are often the ideas of good workers themselves.

And if a worker is lazy, document it, and fire their ass  ;-)

Permalink Reply by The Civilizationalist on January 7, 2014 at 8:51am

An excellent video from Walter Williams and Thomas Sowell about minimum wage.

Will a living wage reduce the number of people on food stamps and subsidized housing? Help lower crime? The cost could end up in higher consumer prices, but lower taxes and better efficiency than if going through the government to redistribute that money.

I suppose automation will eventually replace more and more of these jobs. Not sure what that will do. 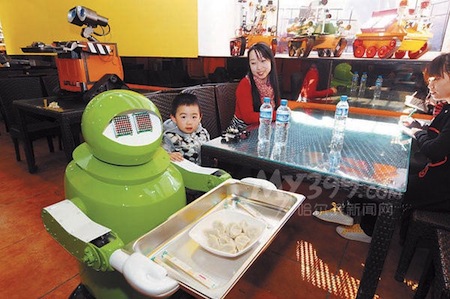 I'm not to sure how the American economy is these days.  I would love to see a world where everyone gets a decent wage, but if it bankrupts smaller businesses and people end up un employed as a result the raise wont do much good.  I couldn't even pretend to be an economist so I have no idea

Unseen, I think you have more or less nailed it with Points 1 & 2 above. What will happen is that eventually everyone that is currently earning less than $15 per hour will lose their jobs. These will tend to be the lowest skilled people.

In a restaurant as an example, the floor managers may be on $15 an hour already and when the kitchen cleaners get the same wage they will look to get their wage increased too. Their argument will be that they are skilled, having studied management and/or accounting and therefore should be recompensed according to their comparative skill sets. It would be difficult to argue against that.

So the business can do one of two things. It can put up it prices to cover the new wages. If it does this the public will march with their wallets to the nearest place that has more competitive pricing. Therefore it will go bust and everyone loses their jobs and the economy suffers from less taxation receipts.

Or it can compete to keep its prices competitive as it did before the wage increases. However it can now only do this by becoming more efficient. This can only be done by reducing its cost base. What is a business’s greatest cost? Yes, wages are. If they don’t want to increase their overall wages costs they can only reduce the number of staff they pay. They will become more efficient by automating some procedures or hiring part time staff (point 3). Why have a full time floor cleaner when it can be done by kitchen staff when it is outside rush hour? Could we use a few less fulltime table staff or just hire them for our peak periods?

Increasing costs can only lead to increased efficiencies if you want to stay in business. The business will end up paying the same amount of tax to the state but there will now be (say) 3 or 4 more people unemployed. These will also be the lowest skilled people in the available workforce. They are usually not very mobile and will only look for work in the same locality…..as all the other restaurants that are striving to be more efficient. There will be no vacancies for them. So they will no longer be paying tax into the community and are most likely going to needing welfare assistance from the same tax pool that they were paying into before they got a wage increase!!! The very people who were meant to benefit from the increase are the ones that loose out. That’s what happens when Socialists gets involved with Capitalism.

"Increasing costs can only lead to increased efficiencies if you want to stay in business. The business will end up paying the same amount of tax to the state but there will now be (say) 3 or 4 more people unemployed."

That is only because in the civil religion of capitalism  the very concept of shareholders making slightly less money to give the workers a living wage is sheer heresy. It is obviously  far far better for a full time worker to not even be  making a living wage than for the high ups to not be able to afford a second jet.