Jubail Church is the oldest still remaining church in the world, located in Jubail, Saudi Arabia. It dates to the 4th century. It was discovered in 1986. The government hides it from locals and bans foreigners from visiting it, even archaeologists. It is an ancient Assyrian church possibly of the Nabatean culture.

In 1986, people on a desert picnic discovered the ruins of a church near the city of Jubail, Saudi Arabia, while digging one of their trucks out of the sand. The church is believed to have been built prior to A.D. 400, making it older than most churches in Europe. It was likely associated with one of five bishoprics existing on the shores of the Arabian Sea during the term of Nestorius, Patriarch of Constantinople and founder of the heresy that bears his name.

Anyone familiar with contemporary Latin and Eastern Rite Catholic church buildings will recognize the basic design. The foundation marks for roof support columns in the main room easily identify it as the nave of a church. Probably, the roof was a thatch of palm branches supported by risers and crossbeams about a foot above the walls for sunlight and ventilation. The congregation would have entered through the main doorway at the west side of the nave and assembled, women standing to the right and men to the left, facing east toward the sanctuary (the middle of the three smaller chambers") where the altar would have been.

At the doorways to the sacristy, sanctuary, chapel, and the main entrance, stone crosses were attached to the wall. These four crosses, in place during the early excavation, disappeared in late 1986 or early 1987. Over the years since the discovery, the desert has erased even the marks left when the crosses were removed.

The ruins are known as the Jubail Church and are acknowledged by the Saudi government, who will not issue permits to visit it because 'the site is being excavated.'

In any case, the original ruins contained four stone crosses, which later went missing, though the marks where the crosses were are still visible. The ruins are thought to date from the 4th century, which make them older than any known church in Europe. Not much else is known but speculation is that it was in some way connected to one of the five Assyrian Church of the East bishoprics which are known to have existed in this area of the Gulf in the 4th century. 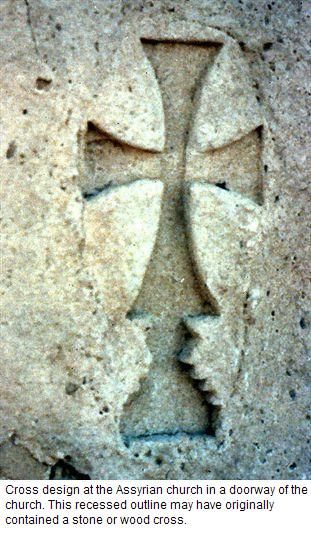 Jubail Church is one of the oldest still remaining church buildings in the world. The abandoned structure is located in Jubail, Saudi Arabia. It dates to the fourth century and was discovered in 1986. The government hides it from locals and bans foreigners from visiting it, even archaeologists. It is an ancient Assyrian church possibly of the Nabatean culture.

The modern Assyrian Church of the East reveres Nestorius.

and Bahira was a Nestorian Christian monk who foretold to the adolescent Muhammad his future prophetic career.

In the Islamic tradition

The story of Muhammad's encounter with Bahira is found in the works of the early Muslim historians Ibn Hisham, Ibn Sa'd al-Baghdadi, and Muhammad ibn Jarir al-Tabari, whose versions differ in some details. When Muhammad was either nine or twelve years old, he met Bahira in the town of Bosra in Syria during his travel with a Meccan caravan, accompanying his uncle Abu Talib ibn ‘Abd al-Muttalib.[1] When the caravan was passing by his cell, the monk invited the merchants to a feast. They accepted the invitation, leaving the boy to guard the camel. Bahira, however, insisted that everyone in the caravan should come to him.[2] Then a miraculous occurrence indicated to the monk that Muhammad was to become a prophet.

It was a miraculous movement of a cloud that kept shadowing Muhammad regardless of the time of the day. The monk revealed his visions of Muhammad's future to the boy's uncle (Abu Talib), warning him to preserve the child from the Jews (in Ibn Sa'd's version) or from the Byzantines (in al-Tabari's version). Both Ibn Sa'd and al-Tabari write that Bahira found the announcement of the coming of Muhammad in the original, unadulterated gospels, which he possessed; the standard Islamic view is that Christians corrupted the gospels, in part by erasing any references to Muhammad.[1]

In the Christian polemics against Islam, Bahira became a heretical monk, whose errant views inspired the Qur'an. The names and religious affiliations of the monk vary in different Christian sources. For example, John of Damascus (d.749), a Christian writer, states that Muhammad "having chanced upon the Old and New Testaments and likewise, it seems, having conversed with an Arian monk, devised his own heresy."[3].

For Al-Kindi, who calls him Sergius and writes that he later called himself Nestorius, Bahira was a Nestorian. After the 9th century, Byzantine polemicists refer to him as Baeira or Pakhyras, both being derivatives of the name Bahira, and describe him as an iconoclast. Sometimes Bahira is called a Jacobite or an Arian. Bahira is at the center of the Apocalypse of Bahira, which exists in Syriac and Arabic which makes the case for an origin of the Qur'an from Christian apocrypha.

*Do you think that Bahira inspired the Qur'an? Who  knows, everything is possible!!

The Islamic-Christian illusion debate will be continue in a vicious circle.