The sperm whale (Physeter macrocephalus), or cachalot, is the largest of the toothed whales and the largest toothed predator. It is the only living member of genus Physeter, and one of three extant species in the sperm whale family, along with the pygmy sperm whale and dwarf sperm whale of the genus Kogia.

I love cetaceans of all sorts, and always have. I’m in awe of the mighty rorquals, like the blue whale and humpback, and love the intelligent and beautiful orcas and the smaller dolphins.

Perhaps I called myself Physeter as a statement of boldness. The Physeter is the largest living predator in the world. It dives deeper than any other air-breather, and does battle with mighty tentacled monsters in the unfathomable darkness.

Maybe I mean to imply that I will aggressively pursue truth and fight against falsehood. I will venture into the deepest darkness and do battle with any horrible, dark idea—and rip it to shreds.

Even better, the Physeter has a rather unique weapon. Physeter makes the loudest sound of any animal. Scientists speculate that the whale’s super-loud clicks can be used to stun the large squid it preys upon. In other words—it attacks with its voice.

Perhaps I called myself Physeter because I wanted to say that my voice in blogging and commenting would be well-heard; perhaps I meant to imply my words are a powerful weapon. 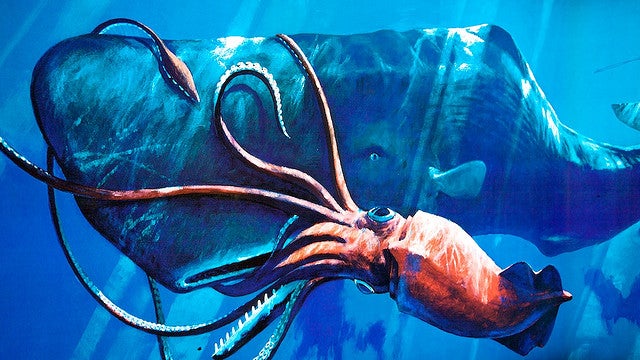 This whale also has the largest head in the animal kingdom. Large head implies great intelligence (metaphorically speaking, of course). Perhaps my named is supposed to be a boast of my own brilliance.

The mighty Physeter was dubbed with the rather juvenile common name “sperm whale”, because the whalers who named it were not all that scientifically rigorous, and thought the waxy fluid stored in its head looked like semen.  Perhaps I picked this name because it suggests sexual liberation.

The real truth, of course, about why I picked this name is much simpler. I think whales are really cool, and sperm whales are one of my favorites, and I just thought Physeter sounded like a good name. The things about sexual freedom and boldness occurred to me later on, but they weren’t the reason I picked this name. I just liked how it sounded.

It can be fun to pick out these meanings for my name. In fact, you can create a metaphor like this from many different events, and different kinds of imagery. This weaving a solid, shimmering metaphor out of intangible threads of coincidence is a good skill to have if you are a writer or speaker. But you would be deluding yourself and your listeners if you thought just because you could show why something means something else, that proves the point you were making.

Christians like to draw together unconnected events and see God at work in them; and the point to these things as proof of God. But all they are really doing is using their own intelligence to create the meaning they wanted.

Sometimes Christians recognize that this kind of metaphor-drawing can go too far. They even poke fun at it, like the recent tongue-in-cheek Christian Post articles about the Superbowl. They compiled one set of verses that “prove” the Seahawks would win, and another set that “prove” the Broncos would win.

When I was in missionary training, we would have times for prophecy. They would tell us all to pray, meditate, maybe read the Bible if we wanted—and see what God would say to us. Prophecy is just about hearing God, they said, not about predicting the future. They asked us to share what we heard even if it didn’t make sense. Maybe sometimes you’d get a false positive, but sometimes you’d find that what didn’t make sense to you would make sense to someone else.

It might seem a little strange, they said, but just have faith that God loves us and cares for us and will speak to us.

Often one of us could come up with a way to take a meaningless image and make a spiritual truth about it.  I was especially good at this. I thought this was kind of cheating, though. It seemed that if God was really speaking, he’d make himself clear; you could draw some kind of “meaning” out of any image at all if you stretched it far enough. But one of my fellow missionaries told me not to be so skeptical. God has given me intellect for a reason, after all; if I can think of a meaning, I should share it, and see if it rings true with the others in the group.  So I made up spiritual meanings for all kinds of random images, and the group seemed to like it.  Sometimes it seemed relevant to our group; more often it was general enough that it could be relevant to any group.

This may be an extreme example, but I think Christians do this sort of thing all the time. “I saw a butterfly today, that means God is telling me my deceased Grandma is in a better place, watching me from heaven.” Or “I heard this song on the radio today, that must mean this decision I’m thinking about must be right.” Or “There are four lunar eclipses in a row this year, that must mean God is doing something crazy in Israel.”

When I was a Christian I was, in essence, taught how to use my own mind to delude myself. I would create the meaning I wanted from meaningless images. If I had not realized this, maybe I could have kept using it unconsciously and become a self-deluded prophet, leading myself in circles. If I had realized this and decided to roll with it, maybe I could have become a hypocritical speaker who tricks the believers out of their money with my ‘words from god’.

Instead, as I came to realize this, I recognized it as a major blow to my evidence for God, and it helped push me away from belief.

When I was a Christian I was, in essence, taught how to use my own mind to delude myself. I would create the meaning I wanted from meaningless images...

That is why nobody can reason anyone away from their faith. That only happens when someone realises that about themselves and uses their own mind to see it as a delusion.

I would steer clear of any religious person who goes by Ahab. If it comes to be, you shall prevail. It is written.

Christians like to draw together unconnected events and see God at work in them; and the point to these things as proof of God.

No, not really.  Christians start out believing in God, and then look at and interpret the world through that lens.  If you believe in a Creator, then a beautiful sunset makes you think not just of atmospheric scattering of higher frequency photons, but also of the Creator, the interconnectedness of life, the beauty found in other places and people.

It's very much like if you believe that people are inherently good, you will view your interactions and experiences with fellow human beings through that lens.  If you view some people (by race or other characteristic) are inherently bad then your interactions with them will be colored by that fear. Both groups will point to individual interactions as "proof" that their view is correct if pressed by an outsider, but that's not really how they are thinking about it.

Comment by James Cox on March 6, 2014 at 4:56pm
I guess, I have a great feel for whales generally from one scene in 'Hitchhickers Guid to the Galaxy', where due the 'Improbability Drive' a sperm whale appears and contemplates it's existence while in freefall. It begans to ask questions concerning the nature of existence just before it becomes an organic scrap pile on reentry.....

^^^ Yes, but it was happy to meet the "ground" - it's chosen name for the new possible friend rushing to meet it.  :D

@Dr Bob How does what you wrote conflict in any way with what you quoted from Physeter's post? Those were just two different ways of saying the same thing: Christians "see" God in the world around them. I put 'see' in quotes since proving God is there is not possible.

It's very much like if you believe that people are inherently good, you will view your interactions and experiences with fellow human beings through that lens.

Wait a minute, I thought we were born into sin. You know, the snake in the garden thing. I guess if we are inherently good, Jesus should have stayed home. Face it, we are in fact inherently animals (even if self aware) and our evolutionary heritage is irrepressible. President Putin's recent  grabbing of the Crimea is no different than a gorilla grabbing a river valley. We need to recognize and accept the true nature of ourselves (get off the high horse) and deal with it.

Ah, I wondered what Physeter meant, even after having taken biology.

I could look it up to learn it's latin (or surname?) origin, but would rather ask you. Do you know?

I'm afraid I don't know the latin behind Physeter, but I have a pretty good guess on Macrocephalus

Yeah, most of us know what phalus means. [jk]