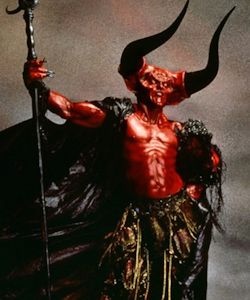 19:1 Both God and Satan remained quiet while Job and his three friends continued debating the system of justice God had provided for the Universe. Job said, "Give me a break, I'm innocent. I've begged God to hear my story but he's shut me out. He has unfairly counted me among his enemies. He has destroyed me. He's even turned my friends and relatives against me. Everyone hates me and I've lost so much weight that I've escaped death by the skin of my teeth. Have pity on me dear friends for God has touched me with his wicked withering hand. I swear to God someday I am going to face God and tell him my side of the story even if he kills me."

20:1 Friend three spoke again. "Hey man, isn't it true man, that the joy of victory by bad people is short lived? Sure they swallow up the treasure, but then they barf it right back up again man. Soon a snake bites them on the ass or something nasty like that. And then their body gets all gross and rots away and turns into a big pile of shit man. You see what I’m saying man? That is God’s plan for the wicked people."

21:1 But Job answered and said "Dude, have you been licking toads or something? Listen to me carefully. Wicked people build big houses and live to be old. They have wicked little children who grow up to take over the family business, and so on. They dance around getting richer and meaner and wonder why anyone would fear God. One man dies happy and wealthy and another one dies never knowing what the good life is like. Both are eaten by worms."

22:1 The first friend asked "How is it profitable for God for a man to be perfect? What does he gain by it? You gotta be the wicked one Job. God is too great to make a mistake like this. You need to clean up your act. That’s what it is." 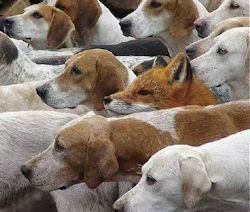 23:1 Job refused to let God off the hook for the unfairness of his fate. "That does it! I want to meet God right now. If I knew the way I would march straight to his court and tell him my side of this and I would argue with him plenty. He would have to see my side of it because I'm right and he knows it. And yet he must have some reason for torturing me like this and that really worries me now that I think about it. It frightens me. There is so much wickedness in the world. Why is there so much evil in the world? If God is so damn smart, and powerful, and good, then why does he allow all the evil? It makes no sense."

25:1 Friend number two said "Ok man is nothing but a worm, we can all agree on that. So how can a worm judge someone who created light?"

26:1 But Job had thought this through. "Yes, yes God is very powerful. But he communicates to us in strange unsolvable riddles. I mean, who can understand and translate the meaning of a clap of thunder? Why doesn’t he just talk in plain language that we can all understand? I intend to remain a loyal worshiper until death, but I need to know, where is wisdom? It’s so damn valuable but it cannot be bought for any price. God must know where the wisdom is stashed because he can see everything. He must have found the wisdom and studied it and said to man that the only bit of wisdom we humans need is to fear him. Lah-ti-freaking-dah.”

Job couldn’t help but to keep reflecting on his life. “I sure miss the good ol' days when all I did was have fun all the time. There was a time when I did so many good deeds and was well respected in the community. Now the youngsters have taken over and they don't know anything about anything. They’re lazy and disrespectful. If I have done something wrong and deserve to be punished then let me be punished. But what have I done wrong?"

32:1 The three friends were suddenly silent for a long time. Basically they were quite angry at Job because he was a self-righteous little bitch and he assumed God had been unfair. Job was likewise mad at them for laying guilt trips on him about somehow being responsible for his own bad luck. 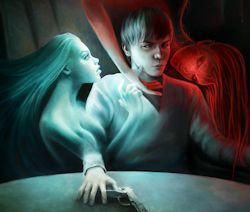 32:6 Friend number one was suddenly overcome by the moment and broke into the longest speech yet about God's greatness and man’s worminess and the overall perfect infallibility of God’s justice system. He insisted on performing a circular argument about how God was perfect and therefore just, and since God was just he was therefore perfect. It was a terribly unimpressive bit of logic and Job just rolled his eyes.

38:1 Finally, God himself felt compelled to join the discussion and provide some true insight. He had been sneaking around invisibly and listening to everything that he already knew was going to be said anyway. But now he decided it was time to clear up a few outstanding philosophical issues. It was time to put to rest the true nature of the great cosmic competition that had pitted good against evil for the prize of men’s souls. 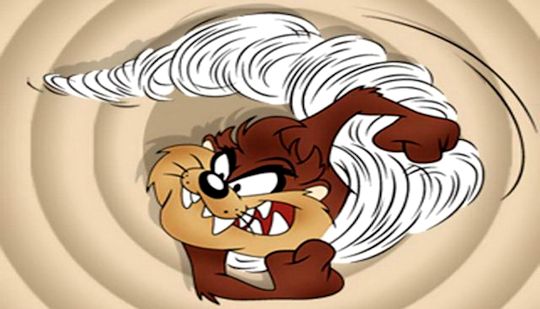 God's voice came booming out of a little whirlwind tornado thingy that suddenly appeared for extra drama. He said "Who thinks they're smart enough to argue with me? Come on you little pukes. Who has the balls? Where were you when I created the Earth? I don’t remember seeing you bozos anywhere around there. Tell me this, if you know the answer, just how big is the damn Earth anyway? Have you measured it lately? Huh? Have you? Have you been everywhere and seen everything? Well I sure the hell have, lots of times. Can you hold the stars in place? I can do it with one hand, no prob, piece of cake. Can you do any of the things that I do? Come on Job, you wanted to argue with God so bad. Well here I am. Answer me you stupid little turd."

42:1 Job wanted to answer but what could he say? So he said "What can I say?” There was a long awkward pause so Job said “I am so vile. I better be quiet now before you smite me. Sorry about all of this sir." But it was too late. God went off big time. He started ranting and raving on and on, asking Job to do things he couldn't possibly do like wrestle weird fantastic monsters that sounded made up and probably never existed. Finally Job interrupted and said "Yes, yes, I know you can do anything and you know everything. You’re God so of course you can do it all. I hate myself now and I am deeply sorry for not quietly accepting my pathetic misery and now I will sit in the dirt and put ashes on my head thank you."

The Lord was especially mad at Job's friends and said "You guys aren't even close to being as cool as Job. I should kick ALL your asses. Now go kill lots of animals and burn them extra crispy for me. NOW."

At last Job had the official answer from God's own mouth as to why there is so much evil in the world. God's answer is "Shut up or I'll kick your ass."

42:10 Having received the glorious benefit of God clarifying his position, Job got better! The sores went away and he started pooping again. Then God made him even wealthier than he was before the silly bet with Satan. Job’s relatives even came over and comforted him regarding all the evil that God had brought. Of course who knows how much his new wealth had to do with the visiting relatives. But anyway, his wife had some new sons and also more beautiful daughters, even hotter than the ones God killed. So that made it all OK. It was all for the best and no one got hurt, except for all the murders and the pain and suffering and the strain of a confusing unsettled description of man’s place in the convoluted cosmic conundrum of moral dualism.

Job lived a relatively long and fruitful life after that. But he still died.

Next: Catchy Lyrics
The Bible According to Brad