The 53%: We are NOT Occupy Wall Street

The 53%: We are NOT Occupy Wall Street 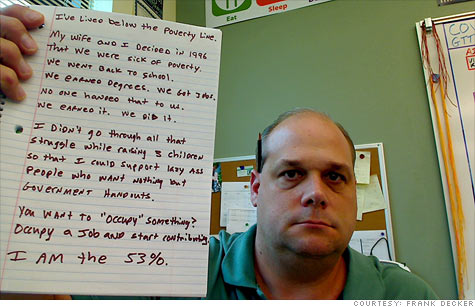 Frank Decker has a message for those at Occupy Wall Street.

NEW YORK (CNNMoney) -- Occupy Wall Street protesters might say they represent 99% of the nation, but there's a growing number of Americans who are making it clear they are not part of the dissident crowd.


They call themselves the 53%...as in the 53% of Americans who pay federal income taxes. And they are making their voices heard on Tumblr blogs, Twitter and Facebook pages devoted to stories of personal responsibility and work ethic.

The number originates in the estimate that roughly 47% of Americans don't pay federal income tax, according to the nonpartisan Tax Policy Center. The 53 percenters stress the fact that they are paying the taxes that support the government assistance the protesters say they want.

Kevin Eder was among the first to galvanize those who wanted to differentiate themselves from the thousands of people rallying across the nation to raise awareness of the growing economic gap between the rich and everyone else.

In early October, Eder created the Twitter hashtag #iamthe53, which has since been posted in hundreds of tweets as the backlash to Occupy Wall Street mounts.

"I would never identify myself with those occupying Wall Street," said Eder, 26, a business analyst in Washington D.C. "The frustration was born out of people claiming to speak for me who don't."

Many of those tweeting share the belief that the protesters need to stop complaining about the government and financial institutions and start looking for work. Ken Gardner, an attorney in Dallas, joined the conversation because he opposes government handouts.


"We don't want to be the 53% who carries the 47% on our shoulders," said Gardner, who thinks more people should pay federal income taxes.

Eder's hashtag helped inspire Erick Erickson, editor-in-chief of the conservative website RedState.com and a CNN contributor, to set up a Tumblr blog called "We are the 53%." It mimics Occupy Wall Street "We are the 99 percent" site.

The 53% site gives a voice to those who reject the contention that most Americans are victims of the system, said Josh Trevino, "quasi-official spokesman" for the blog.

"What the 99% is missing is the element of personal responsibility," said Trevino, who is also vice president at the conservative Texas Public Policy Foundation. "The 53% want to bring that into the conversation."

More than a thousand people have sent in entries to the 53% site, which generally features their photo next to a piece of paper that outlines their views, as well as their struggles and work histories.

"I am responsible for my own destiny," writes one 34-year-old father of three. "I will succeed or fail because of me and me alone."

As Frank Decker read through the posts, he felt he could relate. A public school teacher in Vancouver, Wash., Decker and his wife lived below the poverty line until they decided to go back to school to become educators. He sent in a post because he wanted to share his story.

"We didn't go through all that struggle while raising three kids to support people who don't feel they need to work or people who feel they are entitled to something they haven't earned," said Decker, 44.

At this point, neither Keder nor Trevino plan to shift their 53% efforts from the online world to the physical one. But they are both surprised at how popular the backlash has become.

I honestly don't understand how someone with any degree of education and intelligence can't get a job.  I mean seriously.

There is a Taco Bell near my house that is always hiring managers and friendly people.  Fast food is always hiring.  Kmart and Wal Mart and lower end grocery stores will hire stock boys, shopping cart / parking lot people, janitors.  Restaurants will hire hostesses and bussers and dishwashers.

I would shut my mouth if it could be proven the majority of the protesters have attempted to apply to EVERY single position I mentioned at the vast majority of locations near them.  Sure it doesn't pay 60,000 a year, but it's a paycheck and there is a chance to move up in the company if you WOW the managers with amazing customer service and 100% amazing work etiquette 100% of the time.

These people really piss me off. Yes, there are many Americans on welfare or other assistance who take advantage of the system and have no motivation to do better. But there are also MANY more Americans who just want a decent living wage to pay bills and maybe, just maybe, be able to put a little money in the bank for a rainy day or retirement. Why do people ignore the fact that we are not all cut from the same cloth? Many Americans are disabled, physically and/or mentally. Some Americans aren't exactly "bright" and don't possess the IQ to do more than a low wage job. Many don't have the money to go to college, or just aren't college material. Some live in areas where they can't GET to a college because they don't have a car. There are plenty of young people who want to have a better life, those who find themselves suddenly in the "grown-up" world and don't magically have the funds to get a car and go to school, etc. And remember, we all were stupid at one time, part of growing up and maturing. I personally have never had a high wage job but worked my ass off raising four daughters ( I won't get into that particular situation, but I didn't think much of myself in my teens and 20's ). Only once did I need financial assistance and I took myself off that after nine months. I hated applying for food stamps, so I only got them for a few months at a time and didn't try to get more. I ALWAYS worked, and I worked my butt off. Sometimes the electricity would be shut off because I just couldn't pay the bill. I couldn't bear the thought of college and just couldn't handle doing that AND working. Now, at 48, I still don't have a high-paying job, but I enjoy it and it's an important job. My kids all turned out very well and are trying to make their way in the world.

Occupy Wall Street isn't about handouts. It's about fairness. I've lived a life of just making it and am happy with very little. I rarely buy clothes new. If I can save a buck or two, I do it. I don't want for much at all. I just want to be able to get preventive healthcare so I don't find out, too late, that I have a terminal disease. Does all my years of working my ass off count for anything? Just because I'm not college material or one who has aspirations to work at the top in a big corporation does not make me a "lazy bum" or expendable. I'm so sick of these people expecting that everyone has the same chances in life or the same IQ or potential. That's just plain bullshit. I'm not speaking for those who are lazy and do take advantage of the system. There need to be changes to motivate people who DO have the potential to better their lives, but for people like me who have pride in at least TRYING to do right, we deserve respect, too.

All has to do is look at the pictures of some of these protesters and that in itself speaks volumes: Kris: think about it. What exactly are the "occupy protesters" asking for and what is their message? They claim they want to make "things equal" - hence communism? Hence handouts? Instead of making their lives better they seem to want government or have some abstract idea or worldview to create a utopian society based on some doctrine of "fairness".

I live in a small town in Missouri. There are NO jobs here. You have to travel to find work, and anyone who doesn't have a car is SOL. I drive 35 miles each way to work which means a huge chunk of my paycheck just goes to gas. Not everyone lives, or can afford to move, near places where jobs are available. Let's get real here. And as I said earlier, not everyone is equal in IQ, ability, etc. Some will never work a job better than Burger King...but many who do work their asses off. And all the pictures of OWS posted here does not reflect, I believe, the majority. There will always be some who are there just to be there or who aren't representative of the people who are there for the right reasons. I imagine, too, that the protesters rotate...some come on their days off or after work, so I doubt they're all lazy bums. I've known many people take jobs that are "beneath" them. I've done it just to have a job, but it still doesn't pay all the bills. I've worked many jobs where suddenly hours got cut back and then I didn't know what the hell I was going to do. I've worked two jobs at once...which about killed me. Stop lumping everyone under one umbrella. We are more diverse, more complex, than what is generally acknowledged. Not everyone is a genius or able to make more of their lives but still work hard for next to nothing. That's where the problem lies. Those who truly need a little help are shunned and those who use the system are making it bad for everyone. I'm talking about corporations, the super rich, AND those on public assistance. It is a problem on both ends of the spectrum. I feel those on assistance who are able-bodied should be required to do volunteer work until they can find a real job ( if they're not already working but just can't make ends meet.) And the super rich need to pay their fair share. Multi-millionaires or billionaires have more money than they can ever friggin' spend, so let them pay more to help the economy. I don't disparage those who worked hard to make that kind of money (though I suspect most did it on the backs of others) but they need to do their part. That is not too much to ask.

the point, i believe, the protesters are making is that when the richest 1% own 95% of the money, something's wrong and needs to change.

you don't need a college degree to see that...

the 53%ers have missed the point spectacularly.

It is also the richest 1% who employ the rest of the country..

Comment by Ben on October 27, 2011 at 9:18am
My favorite line from the coupmedia.org site is "Opinions do not help our cause."

Sassan K. ----> educate yourself better on the occupy wall street movement before you fill your blog with hate on the subject. You clearly have no idea what your talking about. Communist? Socialist? Come on go tune into FOX and get more brain-washed.