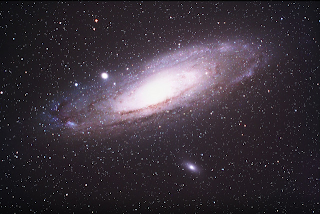 Astronomers believe they may have discovered the first planet ever detected in another galaxy. The new world was apparently glimpsed in the closest giant spiral galaxy to the Milky Way, Messier 31 in the constellation of Andromeda.

It lies an incredible 2.5 million light-years away - too far normally to be seen.

But it revealed itself thanks to a phenomenon called microlensing where the gravitational field of an object closer to Earth acts like a magnifying glass.

Amazingly, it has taken the astronomers five years to realise that they probably netted an extra-galactic planet. They observed a peculiar microlensing event while studying the Andromeda galaxy - which can be seen as a dim blur with the unaided eye - in 2004.

The international team, using the UK's Isaac Newton Telescope on the Canary Island of La Palma, thought at the time that they had recorded a pair of stars orbiting each other.

But computer simulations and other calculations have persuaded them that they actually observed a star with a smaller, planet sized companion about six times bigger than Jupiter.

More than 300 so-called exoplanets have been found orbiting other stars in our own galaxy. And NASA has launched a $595 million spaceprobe called Kepler to watch 100,000 stars for signs of world like Earth.

Picture: A photo of the galaxy M31 in visible light. (Photo: John Lanoue).

• Discover space for yourself and do fun science with a telescope. Here is Skymania's advice on how to choose a telescope. We also have a guide to the different types of telescope available.

Extra-galactic planets? I'm not surprised in the least by their existence, but how frickin' cool is it that we were able to detect one in this day and age!?!? This is like Eratosthenes calculating the circumference of the Earth using shadows and geometry in his day. Cosmology has really been offering up exciting stuff here in the last 10 years and to think it will only get better with wonderful instruments like the Kepler and the Planck both recently launched.

Comment by James on June 16, 2009 at 1:32pm
Very exciting news! Not the fact that there are planets in other Galaxies, bu the fact that we were actually able to detect one. I can't wait for more developments like this.

Comment by dune on June 17, 2009 at 5:01am
Curb your enthusiasm. It is not proven yet. Actually, I am just ticked off that there is no chance in a lifetime that we will be visited by aliens from there...