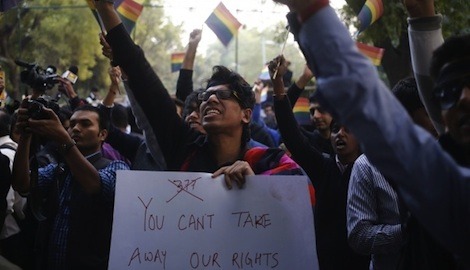 I have to say I am very surprised by this. I thought India was coming to a revolutionary point of moving forward for human equality. But I guess the Hindu religious right has other plans, that are more important that treating other human beings with common decency and respect.

This is a short quotation taken from BBC News. Absolutely appalling is all I can say for the Indian government.

The court said it was up to parliament to legislate on the issue.

According to Section 377, a 153-year-old colonial-era law, a same-sex relationship is an "unnatural offence" and punishable by a 10-year jail term.

Several political, social and religious groups had petitioned the Supreme Court to have the law reinstated in the wake of the 2009 court ruling. "

I shouldn't have to state the obvious, unfortunately I do. Homosexuality is not a choice, its an existence and part of a persons existence. Making it illegal to be gay, is just baffling to me. How on earth in this day and age can you justify that? How can that be logical? You might as well make it illegal to be a certain race.  The fact is, if Islam or Hinduism where to be made illegal in a westernised country, they would be rioting in the streets. So why is it ok for them to make it illegal for certain people to exist? And don't even get me started with their absurd misunderstanding of the word "unnatural". After all these years they still haven't got it right. This is what happens when religion gets mixed up in politics.

And even if one is to go down the road of saying "Oh no, you can be gay; you just can't have sex". Oh but you can? What makes you so special that you can have sex and others can't? Makes no sense whatsoever. Like I said this is a step back to as the news article said a law that is as old as 153 years.
As an additional source, this is what All Out; had to say about it:

"India's Supreme Court has made it illegal to be gay, four years after the anti-gay law was suspended. Millions of people will now be at risk because of who they are and who they love.
This is a frightening moment for lesbian, gay, bi and trans people in India, including Indian All Out members ..."
AllOut.org

What are your thoughts on this?

This is does not bode well. People who've come out will be so vulnerble. First the horrific rapes, now this step backwards...India, what are you doing? (ok, as an American, I can't really be too judgy)

@Kairan,
While there have been many laws restricting same sex marriage, at least your country has not outlawed homosexuality entirely. America is closer to equality than India.

But you are right, this shall make man LGBT people in India feel so very vulnerable, its shocking really. My heart goes out to them

I dont get the logic, people are born the way they are, and be it gay, lesbian, transsexual, and intersexed like myself... how can it possibly be illegal when nature decided my DNA arrangement by random selection  from the DNA of my parents ? legality is a delusion in every aspect...

There is no logical reasoning behind this. The decision is all fuelled by pressure from Hindu extremists and the Hindu religion itself. Its a religion thing, it always is when it comes to homophobia and outrageous laws like this

I actually thought Hinduism was not as bad as the Abrahamic based religions  in regards to gender and sexual orientation , since much of the history of Hinduism seemed to be more tolerant, and more leaning towards Buddhism.. before the Islamic invasion of India  way back, unless Hinduism adopted the ideology from the invasion of Christianity and Islamic beliefs ?

And here is a Hindu site http://www.galva108.org/ for a matter of interest, which includes Krishna's transgendered side... with his/her name as Syamali

which in the end points back to what I mentioned earlier when joining this website with the term, religio-political-elites, where the Elite who claim they are world leaders utilize theism and religion and policy to control and manipulate people, which gives evidence that religion is a powerful mind control weapon.