Today in Europe the Big Thing on TV was the Germany vs. Greece game. Check out the front pages of some European news, bild.de, BBC, lemonde.fr, and you will see it being on top of the sports headlines - and thus people's minds. Admittedly I am no fan of football/soccer, but I do like to watch those games I know is going to be part of history. Last time I watched football it was the World Cup and I believe Spain won (it's hard to pay attention to.)

Today's game is one of those games which will go down in sports history - a classic David vs. Goliath. It's more than just another football match, it's two nations testing each other in a perfect substitution for war in a fairly civilized and regulated test of strength. The Greeks, which are struggling bad economically, are facing the Germans, which are doing quite alright economically. As a side note, the media reports steadily that the Germans have been calling the Greeks lazy lately, and that the Greeks don't like to hear it, because the Greek owe the Germans a lot of money which they probably won't be able to pay back unless they work better.

It is hard times upon Greece these days. Scenes like these, from a very respectable source, and many other scenes and reports of devastation from all types of sources drives that point home very well. The Germans have some seedy areas also, but they are nothing near the seedy areas of Greece. The seedy areas of Greece are becoming slums, and Greece desperately needs German help to recover. This is what the game was really about.

The Greeks came to the game begging the Germans. I'm not joking, they are actually wearing German flags. Look, Greece played in blue and it's quite prominent: 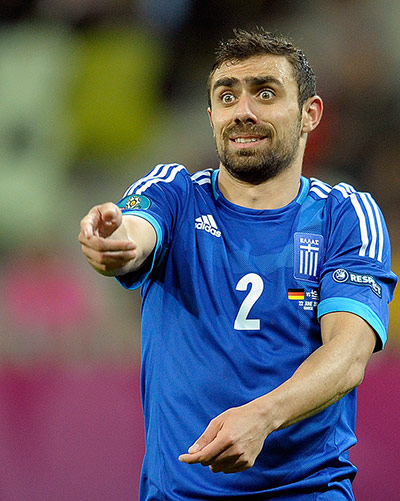 So after quite a lot of push the Germans finally scored a goal after around 40 minutes of boringness. Then it was a break (breaks in football are 15 minutes long and boring). Then it was a lot of boring until suddenly the the Greek player Samaras, which by happenstance is the namesake of the newly elected Prime Minister, score and there is a bit of excitement, especially over context. However no one believed this to last for very long, the Germans were relentless with like 17 to 5 shots on goal. And it didn't, the equalizer lasted for 6 more minutes until Germany scored again. And then it was clockwork, another German goal after 7 minutes, and 6 minutes later a final psychologically humiliating blow of 4-1. The Greeks managed to score a consolation goal in literally the final 89th minute.

Football/soccer is perhaps the largest secular religion in the world. Atheists should be wise to keep track of it. There's already been a Football War (!)

Also, the game made me think of this:

I saw Merkel looking very happy when Germany scored. She must have been thinking "Yes, take that Greece, we won 4-2 and you still owe us 350 billion" Talk about rubbing it in, lol.

Marx referred to religion as "the opiate of the masses," but over time that position has been taken by sports. So much time and attention and money spent on activities that, really, in the overall scheme, mean approximately nothing.

Everyone wants to be a part of a majority. Sports fan-dom is just another example of this need to be grouped but not united. If anything I feel international soccer is a reflection of the human need to glorify importance much like religion.  Much like religion all the adoration and glee given to these teams are not given back in return. Just another bad relationship.

"The Greeks came to the game begging the Germans. I'm not joking, they are actually wearing German flags. Look, Greece played in blue and it's quite prominent"

you are joking yes?

here you can notice some german players beggin for their money back wearing greek flags as well: http://www.parameter.sk/sites/default/files/soccer_euro_2012_german...

obviously i am joking. i'm not sure that you are.

Too bad that many people cant appreciate a game for what it is, mixing it up with politics, etc.

If you cant enjoy a game for the show, then give it up. I did it long time ago (i dont enjoy seeing sweatered male adults runing behind a ball 90 minutes).

I have in the past drawn an analogy between soccer fans and religious zealots. I don’t mean those that watch the big games every so often but with those that would deem themselves as “diehard” fans. I once heard a guy on the radio……..

“I began following my team (Chelsea from London) when I was very young. All my family especially my father are fans. We go to as many weekly games as possible as we are season ticket holders. There is a great community spirit when everyone sings along (chants) together in the stands to our own team songs. Yes, I have the team shirt and bumper stickers on my car. My bedroom is done up in the team colors and pictures. I even have a Chelsea coffee mug and key ring. They are the only team in the world I would follow and are a very important part of my life.”

He went on to say that while certain supporters may be involved in violence against other teams, they were not true fans. He was a “true fan” and new everything about the team history and had read all the books about the team.

Anyone heard that somewhere?

Yes, on a regular basis. The "true fan " bollix is a no true Scotsman. I've heard people using it because person x is not wearing the 'appropriate' fan attire.... it's retarded bandwagon-thinking. It is like a religion in a way, but a mild religion in that they don't blow themselves up, cut out clitorises out or oppose science etc....

I think the 'tensions' in this game were exaggerated by parts of the media. It was generally good tempered and, probably because everyone expected the Germans to win, the Greeks went down their dignity and pride in tact.

If you want to see where football can really get out of hand you should watch a Glasgow derby between Celtic and Rangers. It's a big catholic/protestant split with all the bigotry that poisoned Northern Ireland for so long re-emerging for a couple of hours.

I cannot comment on football, the whole business totally mystifies me, a bunch of grossly overpaid pansies running about a small green field while their worshipers wear cheap nasty polyester clothing and wave things from the sidelines, uugghh !

Just wanted to pick up on your comment that Germany are "doing alright" economically. This is not exactly true, though compared to feckless Greece they are. The fact remains that the Germans made some very serious blunders with their banking system, particularly within the Landesbanken sector, that old favourite of aspiring German politicians (and there lays a big part of the problem). Germany's banking sector has serious structural flaws in it and it could still bring Germany to its knees if the good old German tax payer decides enough is enough. While I am the first person to bash america normally at least the USA has made some effort (some) to correct the failing of  their financial houses, Germany has done zippo, and it will continue to do zippo because their politicians are tied at the hip to their banks, more so than most countries. So "doing well" - No. Hanging on by tax payer fingernails, yes.

Also, it hasn't really sunk in there (in Germany) what Frau Merkel has committed them to. Not fully, not really. When THAT happens, watch the dominoes start falling. In Germany and in the EU.