Recent discussions have been had on how conservatives are a minority when it comes to "freethinking" sites. You think so?

I wonder why thinking people reject conservative propaganda. I mean, if it's a rational position wouldn't we all climb on board? We have a christian political movement waging war on the middle class, on the poor, on science, on the educated, on education, on worker's rights, on women's rights; does anyone really think this resonates with the freethinking minority?

A bunch of pompous assholes telling you exactly how you should act, feel and think. Yeah, that's attractive. I'm impressed that anyone claiming to be an atheist can claim that the above is not factual and can maintain their tight grip on an ideology that stands for the destruction of democracy.

Lame ass excuses for a lame ass philosophy. We know you by not what you say, but what you do.

In MI, we are adjusting to our new crackhead conservative governor Rick Snyder. This gentleman's first act as governor? Increase taxes for low income families, increase taxes for retirees still holding on to this sinking ship of a state and then tax any donations to public education.

You know, that education thing sucks, can't let the masses learn how to read.

Now one might think, hey, we have to balance the budget, right? Well, yes. But this bill does not do so. It intends to capture 1.7 billion dollars from the poor, and give the rich a 1.8 billion dollar tax break. Usual conservative politics, nothing shocking to see here.

I went to the capital of Michigan, (Lansing), to join the protests and see what they had to say. Hit some of the local bars to see what's on everyone's mind. We live in a state where property values have sunk so low that many of us owe more on our homes than what they are worth. A state where retired people lose their homes because of the inability to keep up with property taxes, so lets tax their minimal income source even more. A state on the brink of disaster.

So what is the conservative plan to make everything better? Absolutely nothing. Conservatism is a word that is becoming synonymous with corruption.

If you haven't seen democracy in action, here's what it looks like. This is not the conservative yell, scream, lie and disrupt tactics used on health care reform, (scum, everyone of them), this is peaceful. The protest is growing, the largest supposedly forthcoming, so I will be there again.

I'm hoping an idea I've had catches fire. I am encouraging everyone to buy cheap wallets or purses, and whenever that dirtbag Snyder comes out of hiding we will all be there to throw our wallets at him.

"Here, just take it all you bastard!" 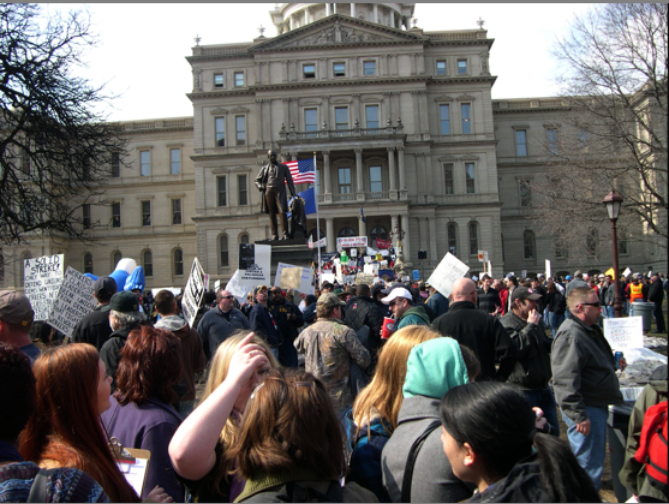 Approaching the Capital, had to park a couple miles away. 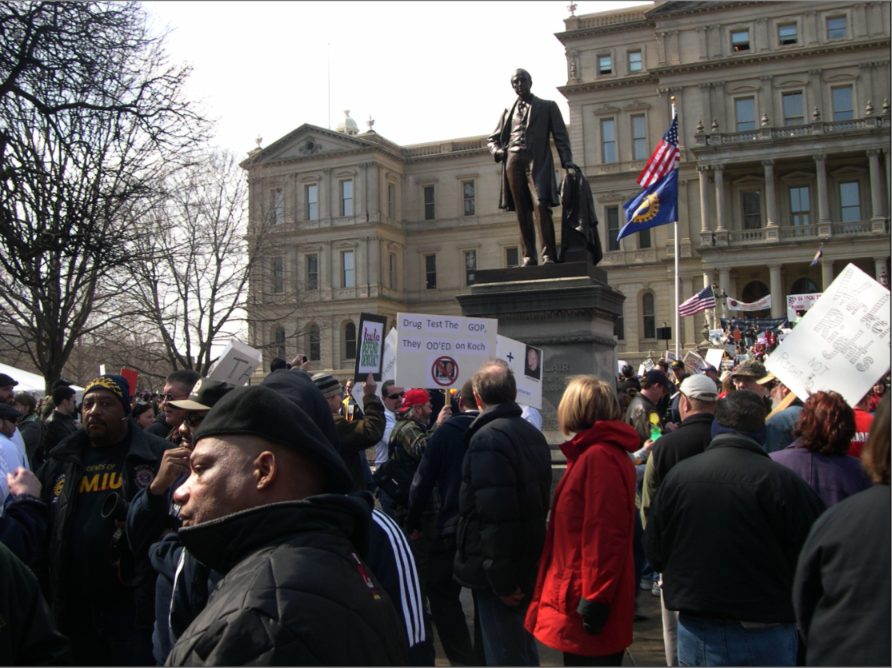 Moving through the crowd. 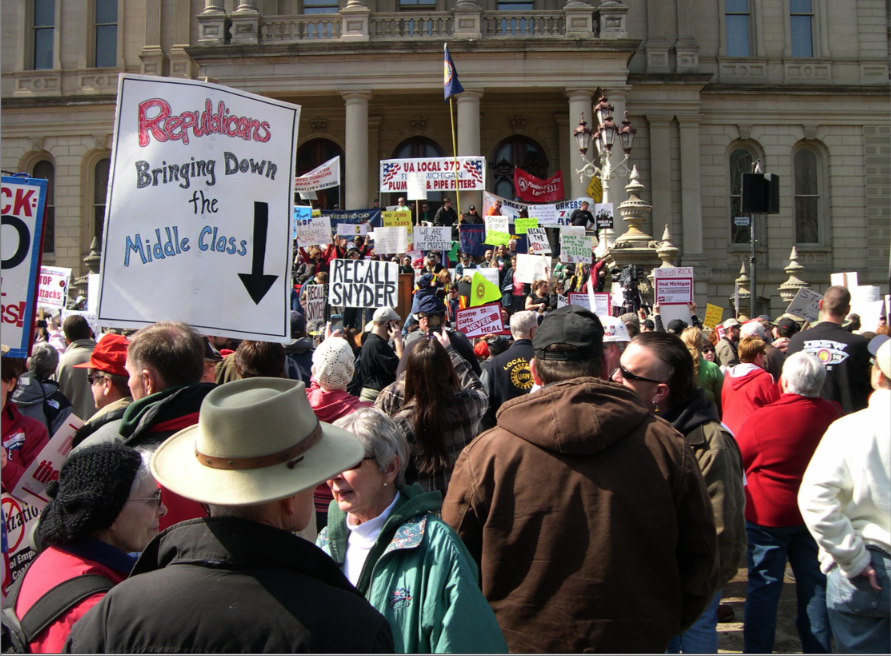 I need to get closer. 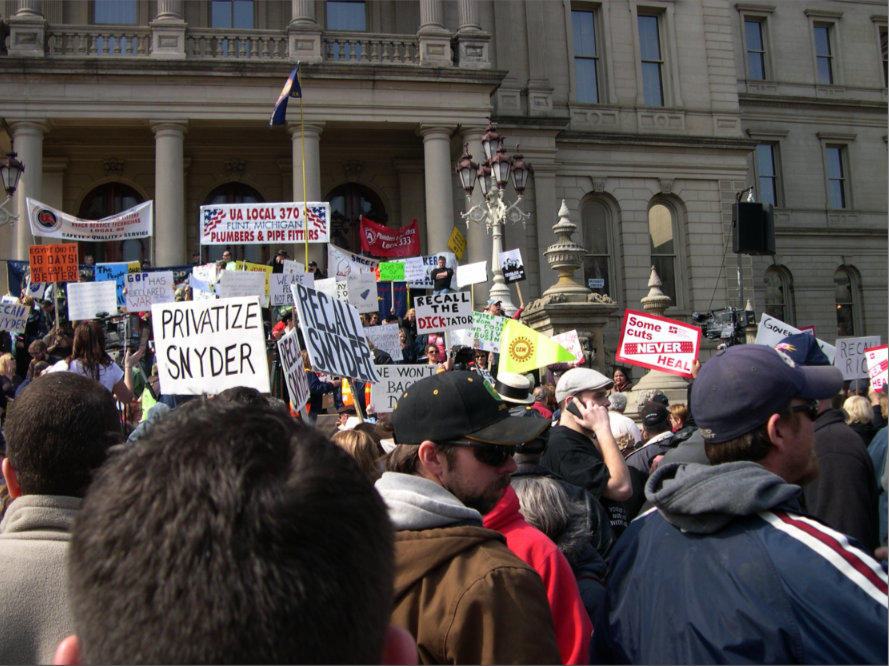 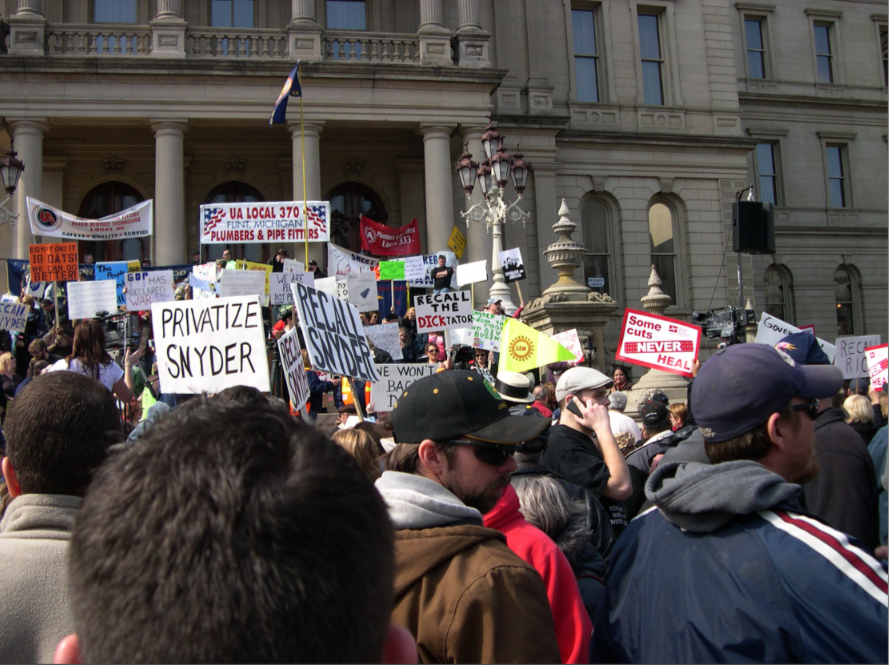 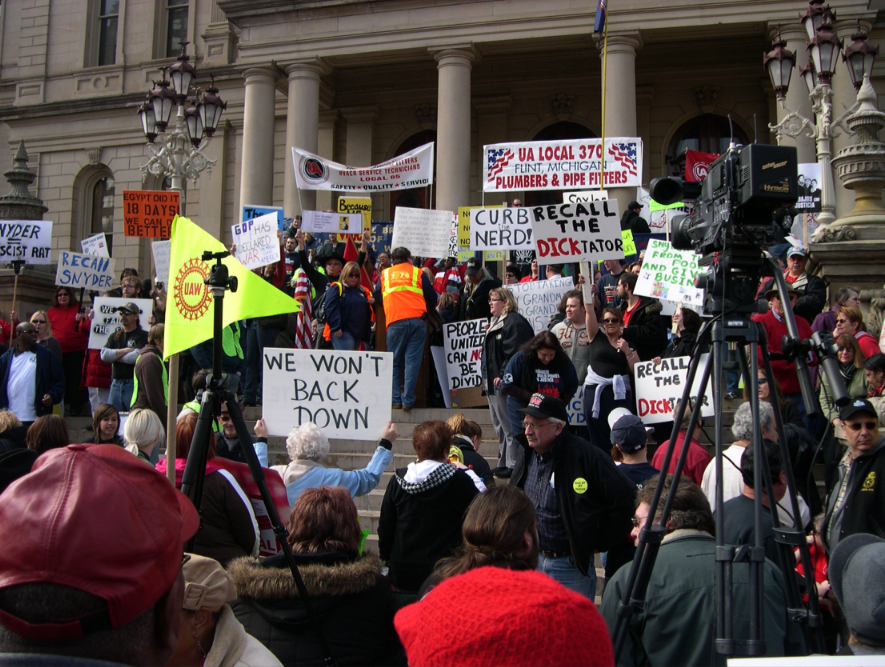 Close as I can get. Check out the little white haired elder lady, go get him! 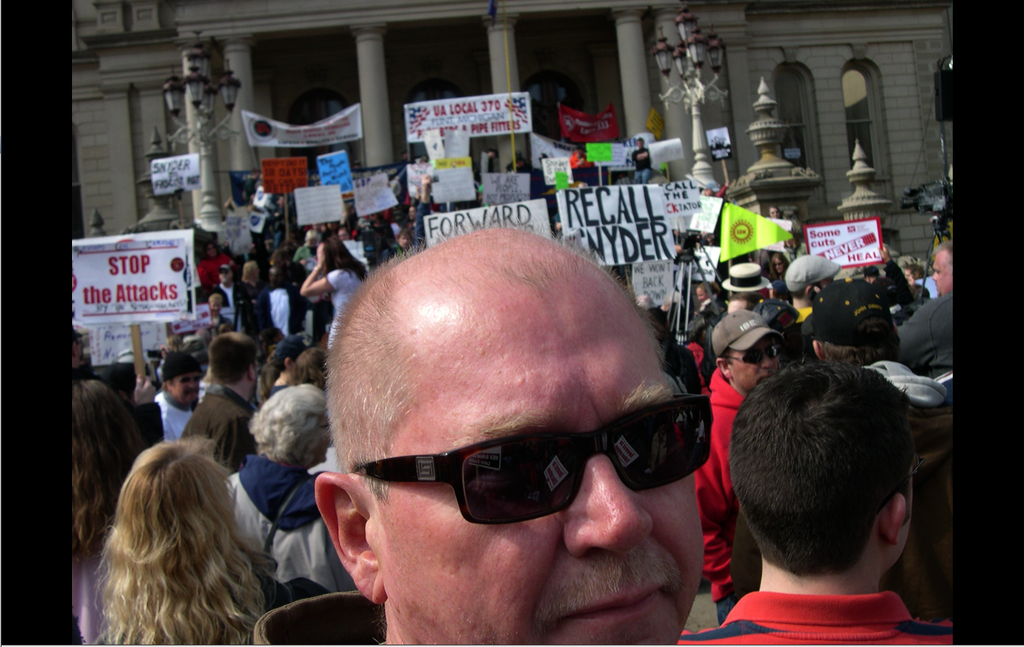 Ok, Hey Zeus, I understand why you are ranting (or semi-ranting) :-) about this issue. I think the confusion is due to the fact that religious nutjobs have convinced public opinion (wrongly, of course) that in order to have "conservative" economic/fiscal beliefs, you have to be religious. And this is not true at all. I have even posted before on it. I am an atheist, "liberal" in most (if not all) of social aspects, but very conservative in the fiscal ones. Essentially, I believe that you are entitled to life, liberty and the pursuit of happiness. Nothing more. And while I see your pain in the fact that most people in your neighbourhood live in houses which are worth less (right now) than what people paid for them, "doing nothing" is exactly the right solution. Actually, lowering taxes on entrepreneurs, and people who want to produce, is even better. If the state takes an active role, it's bound to be a disaster, because it's: essentially unfair (why should the state bail you -or anyone else- out, and not someone else?), and it's "addictive"; if you get the message that the state will bail you out when you are in trouble, why work?

So no, religious nutjobs do not have the right to "own" the conservative (economic) beliefs. And to answer your rhetorical question: no, not all thinking people reject the conservative "agenda" (at least on the economic front). Hope this helps!

Sorry, no help. Snyder has introduces his Emergency Financial Manager plan, which has passed. If a city or town becomes financially troubled, he will hire his buddy for an undisclosed amount to come fire your elected officials and break all contracts, specifically those that are union based.

Democracy? Only in a conservative world.

Lowering taxes on big business does nothing. You have to have a consumer base, a product to sell with people who can afford to buy, before anyone is hiring. A new yacht might sound better, maybe another home in Europe or something.

No one has ever bailed me out, I've worked my entire life. You assume too much. And this bullshit that people are not entitled to basic necessities while the top 1 percent grab twenty percent of all wealth in this country is kool-aid drink talk.

I don't even know what the term conservative fiscal economic beliefs means. Are you talking: