The UK is giving Jesus a makeover. Dude is ready to kick-ass and take names. Check it out:

A very muscular brand of Christianity

Why Jesus has undergone a macho makeover 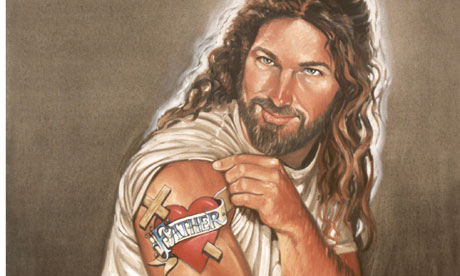 When you hear the name Jesus, is the first image that comes to mind a dewy-eyed pretty boy with flowing locks? If so, think again. After 2,000 years, the Messiah is getting a makeover.

This time he's less "gentle Jesus, meek and mild" and more of a kick-ass action hero – a Chuck Norris in sandals.

No more cissy Kumbaya stuff. In this testosterone-fuelled theology, the Saviour finally has the rippling biceps he would have developed as a carpenter from a working-class home in Nazareth.

The macho Jesus movement has been bolstered by books like No More Mr Christian Nice Guy and The Church Impotent – the Feminisation of Christianity. But it's artist Stephen Sawyer, whose paintings of the Son of God as a tattooed biker and boxer have captured the imagination of Christian men searching for a more manly role model.

As Kentucky-based Sawyer, 58, points out: "I scarcely think Jesus could have overturned the tables of the money-lenders and driven them from the temple if he was a wimp. The model I use for my paintings is a surfer guy who's built like a brick shithouse."

But while you might expect this thinking to flourish in the American South, it's probably more surprising that it's gaining ground in the UK.

According to recent polls, the ratio of women to men worshippers in this country is 65% to 35% – and too much girliness is getting the blame for the gender imbalance.

Hence the rising number of conferences and sermons aimed at men that present a more muscular version of Jesus, along with the continuing success of Christian lad's mag Sorted.

As the Rev Eric Delve, vicar of St Luke's, Maidstone, Kent points out: "Men are looking for action figures. That's why they follow footballers." With the Messiah looking like a midfielder, David Beckham could be in for some competition.

This reinforces that a god is always made in man's image.  It's interesting to note that Chuck Norris is the new god.  Turning the other cheek has been remade into turning into cheekiness,  found in the new vogue of "mooning".

This reminds me of a football chant.

"There's a football game in heaven, in heaven's own back yard

With Jesus as the quarterback and Moses playing guard.

The angels in the bandstand, all let out a yell

When Jesus the quarterback beats the boys from hell.

For some reason I cannot imagine a t-rex petting jesus playing football. Now Thor and Odin on the other hand...