January 3rd, 2009 - In the first incident, a father and his 2 sons (both younger than 11) emerge from their home to view the damage done by a tank round that struck near-by. As they exited their home all 3 were shot and killed by IDF forces while the man's daughter watched in horror. In the second reported incident from the same day, IDF forces stood in the doorway of a home in the Zeitoun neighborhood of Gaza City. The soldiers ordered the male head of the household to come out. As he was… Continue

(I had made this blog private because... well... I get a little weirded out by a lot of emotional poop, but Johnny encouraged me to make this public... so here it is anyway. Thanks, Johnny.)

I can't do it. I guess this is where my doulble-life begins; this is where I learn what it's like to hide the very essence of who I am... because I just… Continue

I must be on some kind of S&M binge because I've been very into disturbingly religious documentaries lately. Deborah 13 is about a 13-year-old girl from a small town in England who is being raised in a very Christian household. Actually, it's dangerously Christian. Her parents decided to only have a couple of children, but then "left it up to god" to determine how many they had. They have 10 total! None of the children are able to watch television or read a newspaper unless previously… Continue

Texas has played host to a lot of recent tomfoolery. Shenanigans linked to and summarized below.

The Texas law that requires public school students to observe a daily minute of silence is constitutional because it expressly allows any silent use of that minute, whether religious or not, a three-judge panel of the 5th… Continue

So... I just got done watching the Jesus Camp documentary that A&E did. One word: scary. Those poor, poor children being robbed of their innocence and youth. I am terrified for these kids... and terrified at the adults they may become.

The lunatic camp leader reminds me of a child molester. She's preying on children in a way that rivals actual physical abuse. How dare she make these kids cry and scare the shit out of them. Wasn't Jesus love? Why on earth would you call them names… Continue

The Reagan Doctrine - an article written by Isaac Asimov and published in 1981. An interesting read in which Asimov responds to comments by Ronald Reagan regarding the Soviets. One of Reagan's more inflammatory statements being "No one who disbelieves in God and in an… Continue

Some People Just Never Learn - Is It Time To Let The Big Banks Collapse?

As many of you have seen I don't always stick to the topic of religion, every now and then I'll delve into the world of American politics in my blogs as well. I was sitting at work today killing time before the shift officially began and I happened upon this article on Time.com...

Citigroup Plans Big Bonuses Despite Rules Against Them

Despite the enormous uproar created by the bonus money… Continue

A senior Vatican official has criticized the excommunication of a Brazilian woman whose nine-year-old daughter had an abortion after being raped, as well as the medical team who performed it.

"Before thinking about an excommunication it was necessary and urgent to save the innocent life" of the girl "to bring her back to a level of humanity of which clerics should be the experts and master," said Rino… Continue

Pope Benedict's repeated gaffes and the Vatican's inability to manage his message in the internet era are threatening to undermine his papacy, Vatican insiders have said.

The Holy See is struggling to contain international anger over the Pope's claim on his first official visit to Africa that Aids "cannot be overcome through the distribution of condoms, which even aggravates the problems".

The Pope's remarks about condoms, and a recent… Continue

A proposal driven through by the Arabic block in the UN to make ”defamation of religion” forbidden by the United Nations has been quietly dropped from the menu of the forthcoming anti-racism conference. This is a clear-cut victory for all humanist, secularist and rationalist forces in the world. Accepting the original proposal would have made life more difficult for all non-religious people in the future, as any critique of the religions could have been… Continue

I recently got into a fairly heated debate with one of my children's aunts regarding religion. She was apparently appalled by the fact that I've been doing my best to shield them (ages 4 and 2) from religion and that I took issue with her teaching them about the Bible while watching them one day. When I learned about it I told her, pretty bluntly, that I did not want her shilling her religious beliefs off on my children and if she wished to babysit them in the future to please respect those… Continue

Would an atheist or an agnostic attend a Christian worship service if invited?

Hi guys. If you check out my profile you will see that I am a Jesus follower doing some research for my doctorate work on religious thinking in the US. This is my first time on an atheist site. If you can imagine being on a Christian site (I have a networking site called the Missional OUtreach Network), then perhaps you understand that I'm a bit nervous! :) I really am a nice guy!

So, if you are kind enough to answer and help me… Continue

Is Religion To Blame For Animal Cruelty?

I found this excellent write-up on Debunking Christianity last night, it is a chapter from John W. Loftus' upcoming book titled The Darwinian Problem of Evil. I found it to be quite thought provoking. It is a very long read but well worth the time it takes. When you're done, take the time to head over to Debunking Christianity and check out some of his other posts, it's one of the best Atheist blogs around.

I was recently introduced to Pat Condell's YouTube channel (http://www.youtube.com/user/patcondell), and have spent the last day or so nodding, laughing, and getting angry about religion. He is (as I understand it), a stage comedian who has gone to YouTube to rant about religion and why we're better off without it. I can't recommend any one video above all other because, honestly, I think they're all fantastic.

How much are we alike?

Basically I wanted to create a short questionnaire asking questions to determine how close everyone here is to my beliefs in philosophy, religion, ethics, politics, etc. Please fill this questionnaire out so that everyone can get a feel of what everyone else thinks.

(Please choose the most clear and short answers possible, in less than two short sentences. Interpret each question as you would normally or how you think might generally be interpreted by most… Continue

The Army's stance on abortion LOL, this is what happens when you search for anything regarding abortion on a govt computer. I know where they stand now :p

Why the Pope is a mass murderer.

As if he wasn't gaining fans by excommunicating the mother and medical team of a 9 year old rape victim that ended a pregnancy found to be a risk to her life, the Pope is still out there, telling all those AIDS orphans and soon-to-be widow(ers) that condoms are evil!
The Vatican was 'considering an exception in the case where one married person has HIV/AIDS but the other didn't." So far, this exception hasn't been made.
Only considered.
While people… Continue

More of these idiots trying to push their religious views into government law.

From a Seattle Times article.

ST. PAUL, Minn. — A group of Minnesota religious leaders say they're supporting another push at…

LOUISVILLE, Ky. - A controversial Kentucky museum that trumpets the Bible story of creation and rejects evolution is making room for an odd guest: Charles Darwin.

Jon O'Brien, the President of Catholics for Choice, has written a response to Pope Benedict's statement on condom use, posted on OpposingViews.com. 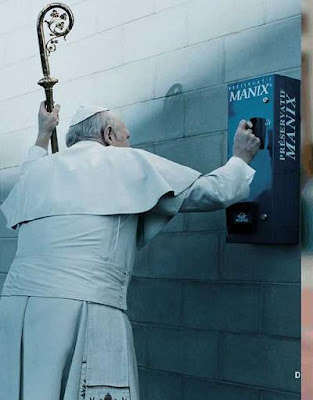 As the pope traveled to Africa, he chose this moment to make what appears to be his…