PBS Frontline expose "Secrets of the Vatican" rather shocking at times.

The recently broadcast documentary by Frontline on the inner workings of the Vatican in Rome was quite illuminating and, at times, shocking. Accusations of the Vatican Bank laundering large amounts of underworld money, homosexual activity among, not only the priests, but the highest ranked Vatican officials,  mishandling of the pedophilia scandal , and the continuing power struggle between Pope and Cardinals are all brought to light. I was especially shocked by the video evidence that…

Comets are essentially big dirty snowballs, the kind you throw at someone you really don't like. They are mostly made of muddy stinky ice, and bits of dust and little rocks.

Comets are about the size of cities and towns, sort of like frozen lakes in space. We've had a few that were the size of big cities like L.A. and one that was even bigger. But the majority are…

How to prove God is real

So, I’ve noticed a lot of Christians use words when they debate.

It doesn’t matter whether it’s a live debate, or an Internet discussion. Christians always use words. They will make logical arguments about why the world must have a Creator. They’ll talk about history, and claim the Bible is reliable and true. They’ll give personal experiences. They’ll talk about how morality must come from a divine law-giver, or claim life is meaningless without God.

I don't even know where to begin.  I find it so difficult to believe that, in they year 2014, we are facing a state that is about to pass legislation that will place the religious 'freedom' of some ahead of the civil rights of others.  I'm embarrassed to say that I live in a country that can stoop to such levels.

Religion has been a poison to the human race for so long.  It's time for people to stop believing in fairy tales and grow up.  Treat ALL people with dignity and respect!…

Suppose you have two caramel apples that appear identical. You ask me which one I want, and since I can’t see any difference between the two, I arbitrarily choose the apple on the right because it’s slightly larger. I bite into it and—surprise!—it’s actually a caramel onion.

Ever have one of those moments where you think you’ve found something interesting and new, but it turns out to be the same old nonsense everyone else is peddling?

I found a blog on Patheos called “Science on Religion”, and I thought it sounded pretty good. It looked like either an atheist or a liberal Christian blog, based on the artwork and name. I thought it could give an interesting perspective.

Does God Exist? 6 Reasons to Believe

I want u guys keep in mind that is not an attempt to convert or force anyone to believe what I believe. This is also not for the sake of trying "prove" anything but just to give Atheists a sense of why I believe in a God.

Why I may one day encourage my father to keep believeing.

It's a strange crossroads that I've found myself. It all started last week when I received a text message seemingly out of the blue from my stepmother. She had been looking at something online and I guess decided that she should suggest I check out William Lane Craig's Reasonable Faith. I told her that I was well aware of the man and his arguments and I received in reply the "I'm worried about your eternal soul" conversation only that she used the word "future" instead of "eternal soul", but…

MIDDLESBORO, Ky. — A snake-handling pastor who appeared on the National Geographic television reality show “Snake Salvation” has died after being bitten by a snake during a weekend church service in Kentucky.

Jamie Coots was handling a rattlesnake at his Full Gospel Tabernacle in Jesus Name Church in Middlesboro when he was bitten on the hand Saturday night, another preacher, Cody Winn, told WBIR-TV.

After the bite, Coots dropped the snakes, but then picked them back up and…

Sure, Lots of great art has been inspired by Biblical scenes.... Well this isn't it...

But's it's just as great, irreverent, and maybe even more powerful....… 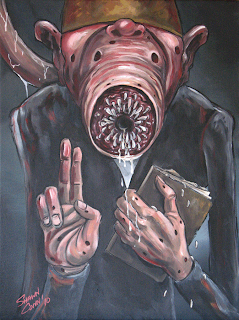 Took some time off of think atheist but I still love this forum. Good to see many of you again. Some of the regulars seem to be gone/on hiatus like me. Did I miss something?

Johann Bode and Johann Titius were best buds and they made a rule about planets.

Okay first of all let's call it what it is. It's not really a rule. And it's not a law. It's not even a theory. It's more of a thingy. It's the Bode Titius Thingy.

It all started in the late 1700's when… Continue First, I can answer all of their questions but they can't answer…

Defeating Islam and the end of religion

There is no scientific and rational basis for believing in the existence of a god of any description. All religions involve irrational beliefs and practices. Islam is not only a religion, but also a political movement. Unlike other religions, its irrational beliefs and practices are a threat to all liberal democratic societies. We need to bring an end to religion. We also need to defeat Islam with a two pronged approach.

The first part of the approach is the head-on attack. The Koran… Philosophy and religion faculty member Kelly Murphy always wanted to teach a course on apocalyptic literature, and she is a fan of AMC's TV show "The Walking Dead." The…