What makes the "hardcore" religious so... "hard headed"?

I remember not too long ago watching a news clip that showed two people talking about political parties. No matter how one of them tried to proclaim that either party can be wrong at any time and asked if the other person would side with the right party if the time came, the other kept saying that she would never change her party affiliation, she is a democrat and will be a democrat never a republican.

Sometimes I wonder if i'm wrong. What if there IS a God? What would be his desires? What does he want from us?

The more I think about the question the more I realize the obvious answer is.....nothing.

An omnipotent being IS everything therefore he has no NEEDS or WANTS. A supreme being who manipulates the fabric of existence at will lacks nothing nor needs anything.

A God who desires worship, praise and submission is not a God at all. These are qualities of men.… Continue

If you haven't already; watch this douche then read the story. 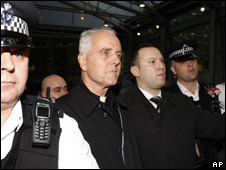 The Vatican has rejected an apology by a British bishop who denied the full extent of the Holocaust.

It said the bishop needed to "unequivocally and publicly" withdraw his comments.

You are all apparently going to hell or where ever it is you believe the bad guys go.

All religions believe in different ways of getting to 'Heaven'… Continue

Now this is a rant


Life-Science has many meanings, one of which is the science and art of living. Yes Gertrude, there is a science behind this existence we experience, and an art form we practice that helps us enhance the science. We make decisions based on known repeatable outcomes: Science. When… Continue

Found this song online; I like the lyrics alot; download the song and sing along; the artist is XTC


hope you got the letter, and...
I pray you can make it better down here.
I don't mean a big reduction in the price of beer
but all the people that you made in your image, see
them starving on their feet 'cause they don't get
enough to eat from God, I can't believe in you

Dear God, sorry to disturb you, but... I feel that I should be… Continue

Discovering the secularist cause (New article at Examiner)

Here's my latest at Examiner.com, under my new title, "DC Secularism Examiner." It's a brief history of what brought me to writing about atheist activism.

As I put my career in professional theatre temporarily aside (populated by a generally liberal and socially tolerant demographic) and toward politics, I came to realize that while my own…

I know it has been a while since I posted on my blog. Sorry :S.

Unfortunately I am just too damn lazy and am so tired after work, that writing in my blog is more often than not the last thing I consider doing when I get home.

However, today I thought I would write a little, becuase I engaged in a very interesting facebook discussion with an old family friend from back home…

You were the source of so much fun and debauchery, You will be missed..... I am so glad I found this community; so glad I have joined.

Already I am seeing other like minded people on this website that think just like me; yep we atheists actually use our brain for thinking unlike non-atheists who just go along with what the church tells them.

I am so sick of religious bullshit going on in the world; we need to not ban religion but take religion out of governments, schools and other places where they can be harmful to the human… Continue

Well that was exciting.

Haha, Wow. My last post of my rant against trendy vegans/vegetarians got rather exciting and out of hand. More than likely my fault, but I rather like the people of this site so I took it down as to not offend or alienate anyone on the site that saw it as a personal attack on all people that are vegetarian.
The amount of replies that took away from my post things that I didn't mean was astounding, as I have had this post on other sites and not gotten so much offense. I can only assume that… Continue

Now I am not expected to go into extreme specifics or go into too much detail but just basically throw this out there and let it be know. If you disagree don't be a dick. :P So I hear a lot of people talking about how Militant Atheism is a bad thing for the image of Atheism and I came to one final conclusion:

I mean what is Militant Atheism? Asking to have "God" removed from the pledge? Wasn't that how it originally was? Being against religion? Even… Continue

My new atheist column at Examiner.com

I haven't checked back at Think Atheist in a while, and partly this is because I have been busy working on my new column at Examiner.com where I am the "DC Political Atheist Examiner."

If you haven't been by, I'd love for everybody to check it out.

Here are some recent highlights:

Currently in the United States "Non Religious" people make up about 20% of the population.
This includes Atheists, Agnostics, Secular non affiliated, No preference, etc. Jews consist of less than 2% of the population of the United States. Mormons less than 2%, Muslims less than 1%. These are the religious groups that the non-religious out number, yet why is it that we are lucky to get 1 or 2 congressmen to represent us? The truth is that essentially every congressman or woman in congress… Continue

Arabs, Muslims battle US, Europeans over free speech at UN

GENEVA: Arab and Muslim countries defended Tuesday a resolution they pushed through at the United Nations to have the body's expert on free speech police individuals and news media for negative comments on Islam.

The United States, Canada and some European countries criticized the role reversal for Kenyan legal expert Ambeyi Ligabo, who has reported to the global body on measures by dictatorships and repressive governments to restrict free speech.

The U.S. and other… Continue

One of the first things I notice when the question of God's existence comes up is how very little is discussed as to what God actually IS. It seems to me that if we are to make progress in this debate, we have to take time to actually reconcile our perceptions of what God actually is in order to debate his existence in the first place. In this blog I will present what I believe the concept of God actually IS and why its important to "simplify" our perceptions of God in order to fully appreciate… Continue

The Fallacy of Faith

According to Merriam-Webster, deduction is defined as “the deriving of a conclusion by reasoning; specifically: inference in which the conclusion about particulars follows necessarily from general or universal premises.”

An example of deductive reasoning is as follows:

Premise 1: People cannot see in the dark.
Premise 2: It is dark in caves.
Conclusion: People can’t see in caves.

There’s no arguing about the above example. A person might say that… Continue

If you weren't aware, Morticia has her own show weekly on ThinkAtheist.com. It is a video show and past shows can be found here http://www.ustream.tv/channel/531226

When live the show can bee seen here http://www.thinkatheist.com/page/for-the-atheists .

Here is the chat log of the last show.