Since here are some outstanding documentaries that are available to view online for free, I thought I would take the liberty to add them to the discussion list in this TED group.  I suppose the group is now morphing into more than just great TED Talks....  Hope that you will enjoy all the selections that are offered in this group and add your own as well.  Comments are indeed welcome.  So get a cold drink, pop some corn and sit back and enjoy the show! 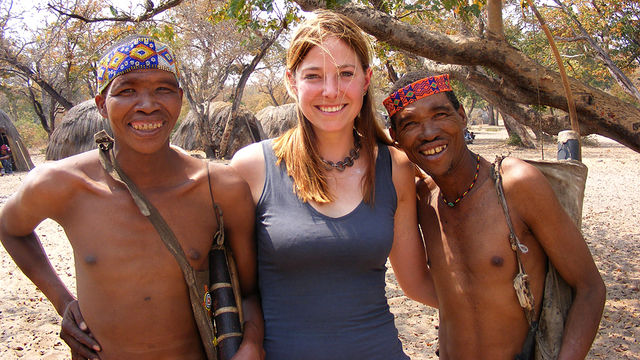 Dr Alice Roberts travels the globe to discover the incredible story of how humans left Africa to colonize the world.

How did we get here? Following a trail of clues from the latest scientific research, Dr Alice Roberts re-traces the greatest ever journey taken by our ancestors.

Thousands of years ago one small group of our species, Homo sapiens, crossed out of Africa and into the unknown. Their descendants faced baking deserts, sweat-soaked jungles and frozen wildernesses and risked everything on the vast empty ocean.

Within 60,000 years they colonized the whole world… How did they do it? Why do we, their descendants all look so different? And what did we have that meant we were the only human species to survive?

Using the evidence from genetics, fossils, archaeology and climatology, Dr Alice Roberts uncovers five epic routes our ancestors took across the globe and the obstacles and brutal challenges they encountered along the way.

It reveals how our family tree grew and spread out across the world, producing all the variety we see in the human species today – but despite all that diversity, Alice reveals how astonishingly closely related we all are.

This playlist bellow contains all 5 episodes from this series: Out of Africa, Asia, Europe, Australia, and The Americas. Three films exploring the very thing that makes us human. Each episode features an extraordinary character who can do extraordinary things with their brain.

Marc Yu is only 7 years old, but he already has a repertoire of over 15 classical piano pieces – some of them over 20 minutes long.

Chess grand master Susan Polgar tells the story of how her father turned her and her sisters into chess prodigies.

Autistic Savant George Widener stuns us with his superhuman calculating and memory skills. And prepare to be moved by Tommy McHugh – the Liverpool hardman who turned into an obsessive artist after surviving a stroke. We find out how they do it.

Watch These Videos For Free On Top Documentary Films: Life is a nature documentary series made for BBC television, first broadcast on BBC One and BBC HD from October to December 2009. The series takes a global view of the specialized strategies and extreme behavior that living things have evolved in order to survive; what Charles Darwin termed “the struggle for existence”. Four years in the making, the series has been shot entirely in high definition.

The UK broadcast of Life consists of ten 50-minute episodes. The opening programme gives a general introduction to the series, a second looks at plants and the remainder are dedicated to the major animal groups. They aim to show common features that have contributed to the success of each group, and to document intimate and dramatic moments in the lives of selected species chosen for their charisma or their extraordinary behavior. A ten-minute making-of feature Life on Location airs at the end of each episode, taking the total running time to 60 minutes.

Life is produced by the BBC Natural History Unit in association with the Discovery Channel, Skai TV and the Open University. The original script, used in the British and Canadian versions of the series, was written and narrated by David Attenborough. In the USA, the series was shown in an 11-part run beginning in March 2010, with narration by Oprah Winfrey.

The series is marketed internationally under the BBC Earth brand and is distributed by BBC Worldwide. It has already been acquired by several Latin American broadcasters and by Discovery Channel Canada, where it made its North American premiere on 15 November 2009. With a production budget of $25 million, the makers of The Blue Planet: Seas of Life crafted this epic story of life on Earth. Five years in production, with over 2,000 days in the field, using 40 cameramen filming across 200 locations, and shot entirely in high definition, Planet Earth is an unparalleled portrait of the “third rock from the sun.” This stunning television experience captures rare action in impossible locations and presents intimate moments with our planet’s best-loved, wildest, and most elusive creatures.

Employing a revolutionary new aerial photography system, the series captures animal behavior that has never before been seen on film. The series features high-definition footage from outer space to offer a brand-new perspective on wonders such as the Himalayas and the Amazon River.

From the highest mountains to the deepest rivers, this blockbuster series takes you on an unforgettable journey through the daily struggle for survival in Earth’s most extreme habitats. Planet Earth goes places viewers have never seen before, to experience new sights and sounds. The set contains the original U.K. broadcast version, including 90 minutes of footage not aired on the Discovery Channel’s U.S. telecasts, and features narration by natural history icon David Attenborough.

HERE Are The Links For The Entire Series: This episode is about the evolution of the brain, and its complexity.

In this series, Robert Winston exposes the different stages of our growth and development, from birth to death, from a biological and personal point of view.

From fertilized egg to six trillion cells working in concert, this is an incredible journey through the most complex biological mechanism on earth. While the latest imaging techniques guide the viewer through veins, down fallopian tubes and around the brain, this groundbreaking series also explores the human drama born of this microscopic world.

Watch all 10 parts at Archive.org
http://www.archive.org/details/BBC-Life