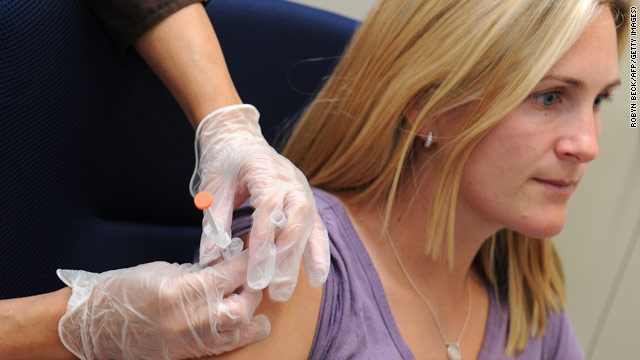 (CNN) -- Whooping cough, also known as pertussis, has claimed the 10th victim in California, in what health officials are calling the worst outbreak in 60 years.

Since the beginning of the year, 5,978 confirmed, probable and suspected cases of the disease have been reported in California.

All of the deaths occurred in infants under the age of 3 months, says Michael Sicilia, a spokesman for the California Department of Public Health. Nine were younger than 8 weeks old, which means they were too young to have been vaccinated against this highly contagious bacterial disease.

"This is a preventable disease," says Sicilia, because there is a vaccine for whooping cough to protect those coming in contact with infants, and thereby protect the infants.

However, some parents are choosing to not vaccinate their children. In other cases, previously vaccinated children and adults may have lost their immunity because the vaccine has worn off.
Why are parents skipping vaccines?

The vaccine "does not protect you for life," explains Alison Patti, a spokesperson for the Centers for Disease Control and Prevention.

Sicilia says California Health Department epidemiologists estimate 50 percent of the children who have gotten sick were infected by their parents or caregivers.

According to the recommended vaccine schedule for infants, newborns don't get their first pertussis vaccine until they are 2 months old, leaving them vulnerable to infection until then if the people surrounding them are infected.
Breaking down whooping cough

"That's why the real important message is -- whether it's a mom, dad, sibling, grandfather or grandmother that comes in contact with these really young babies -- all the close contacts, including the health care professionals, need to vaccinated," says Patti. It's called the "cocooning strategy," where the newborns are protected because the older people around them have been vaccinated and protected from pertussis, and therefore won't pass it on to little babies.
Do children in the U.S. have to get more shots?

Pertussis, or whooping cough, is a highly contagious disease caused by bacteria that can lead to severe upper respiratory infections. The bacteria is spread in tiny droplets when an infected person coughs or sneezes.

Initial symptoms are very similar to a cold, but a week or two later, a violent cough develops.

"If you've ever seen a child with pertussis, you won't forget it" -- that's how the American Academy of Pediatrics explains what whooping cough is on its website. The academy says a child with the disease coughs so hard and so often "until the air is gone from his/her lungs and he/she is forced to inhale with the loud 'whooping' sound that gives the disease its nickname."

The cough can last for weeks and children can cough so hard and rapidly,that blood vessels can burst and they have difficulty eating, drinking and breathing. According to the CDC, "about 1 in 5 infants with pertussis get pneumonia, and about 1 in 100 will have convulsions. In rare cases (1 in 100), pertussis can be deadly, especially in infants."
Listen to what whooping cough sounds like

Parents and doctors can often miss the initial symptoms of pertussis in the youngest patients because they often do not have the characteristic cough with a "whoop" says Patti.

According to the National Institutes of Health, "the whoop noise is rare in patients under 6 months and in adults."

That's why parents need to be alert to symptoms in themselves as well as their children, says Patti. If there's a prolonged pause in breathing or they have trouble breathing, that's an important sign and parents should seek medical attention immediately, she explains.

"It's important to go to the doctor early on," says Patti because, "antibiotics don't help you later."

Adults usually don't have the "whoop" cough, so they may not think they have pertussis. Patti recommends if someone has a cough that doesn't go away, they should get tested for pertussis.

Sicilia points out that the pertussis vaccine isn't perfect and its protection wanes after about five years.

Health officials are urging everyone who hasn't had a pertussis vaccine in the past five years or -- doesn't remember if they had one -- to get the shot.

Permalink Reply by T A A on October 22, 2010 at 11:02am
I myself would possibly not have my children vaccinated. Altho the autism scare seems to have quieted down, there are plenty of other side effects of vaccines which remain in the news.

In the case of pharmaceutical companies, I expect no less than for them to show studies "proving" that their products, which we must take to make them rich, are safe. Talk about conflict of interest. I have worked for big pharma, I know that research that is made public has finagled data, I have had VPs do it to my own testing results and the FDA does not give a hoot, as long as the paperwork is in order.

I have no children and do not plan on making any. If I had children, the decision would certainly be higher.

Myself had a flu shot only once in my life, and that winter was sick for 2 stints of 1 month and 2 months, the absolute worst winter of my life, and it was not H1N1. The shot weakened my immune system enough that I caught all the other shit tho.

I have known big pharma up close and personal, through work and university, and I will/would never trust it.