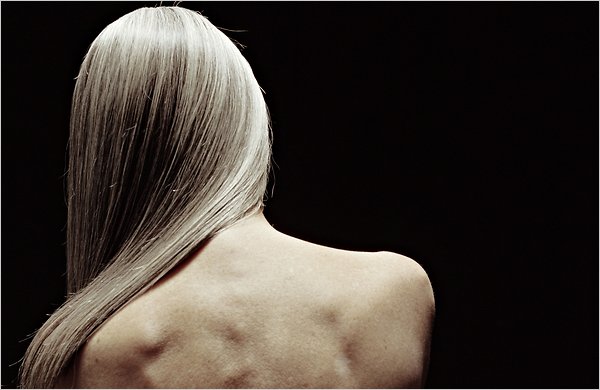 It’s become a cultural norm: women of a certain age cut off their hair.


MY mother hates it. My sister worries about it. My agent thinks I’m hiding behind it. A concerned friend suggests that it undermines my professional credibility. But in the middle of my life, I’m happy with it. Which is saying a lot about anything happening to my 55-year-old body.

I feel great about my hair.

What’s worse (to my critics) is that my hair is graying. Of course it is. Everyone’s hair is graying. But some of us aren’t ready to go there. That’s fine with me — I’m not judgmental about dyes. In fact, I find the range and variety of synthetic hair color to be an impressive testament to our unending chemical creativity. I’m particularly fascinated by that streaky kaleidoscopic thing some blondes do that looks kind of like Hair of Fawn. For my own head, I’m a tad paranoid about smelly, itchy potions.

No one seems to have any problems when a woman of a certain age cuts her hair off. It is considered the appropriate thing to do, as if being shorn is a way of releasing oneself from the locks of the past. I can see the appeal, and have, at times in my life, gone that route. Some women want to wash the men (or jobs) right out of their hair. Others of us have to have at them with scissors. Again, I do not judge. Go right ahead, be a 60-year-old pixie.

So why do people judge middle-aged long hair so harshly? I’ve heard enough, by now, to catalog the multitudinous complaints into several broad categories.
YOU’RE ACTING OUT. Long hair is not the appropriate choice of grown-ups. It says rebellion. Hillary Rodham Clinton softens her do, and sets off a bizarre Howl of Angry Inches, as if she had betrayed some social compact. Well, my long hair is indeed a declaration of independence. I am rebelling, variously, against Procter & Gamble, my mother, Condé Nast and, undoubtedly, corporate America in general. Whereas it used to be short hair that was a hallmark of being a liberated woman — remember the feminist chop? I do; I did it — these days, long hair is a mark of liberation.

My mother has a lot to say about my looks: Where did you find that shirt? Did you forget your makeup? She recently suggested, fluttering her hands in the vicinity of her ears, that I get just a very little trim. As if she thought she could still trick me into the barber’s chair to re-enact one of the central traumas of my childhood, when I was marched into a hair salon (so that’s where mothers went?) with hair to my waist and came out an outraged, stunned, ravaged 7-year-old with a stylish, hateful pageboy.

My mother’s favorite expression to me is “Make an Effort.” What she doesn’t understand, of course, is that just because things don’t turn out the way she thinks they should doesn’t mean an effort wasn’t made. It is incredible how parents and children never let go of old habits of relating. My mother still makes me feel like a 15-year-old. However, that no longer feels like a bad thing, if you see what I mean.
YOU’RE STILL LIVING IN THE ’70S. And why not? I like being 55 going on 15. As far as I’m concerned, we never did get better role models than that gang of girls who sang their hearts out for us through lusty days and yearning nights: Bonnie Raitt, Joni Mitchell, Linda Ronstadt, Cher. Emmylou Harris is still a goddess in my book, with that nimbus of silver hair floating past her shoulders. Next thing you know, we’ll take to wearing beaded leather headbands across our foreheads. And, I might add, that was a good look.

If you want to throw Princess Grace, Brigitte Bardot, Ingrid Bergman, Pussy Galore, Sophia Loren, Charlotte Rampling, Isabelle Huppert, Julie Christie and Catherine Deneuve into the mix, who am I to complain? While those sexy sisters are hovering, I might note, with a sense of wonder, that Europeans are much more comfortable with long hair on women of a certain age. But then again, they’re more comfortable with women of a certain age in general. Perhaps I should move to Paris. Come to think of it, this would be making the kind of effort that would make my mother happy.
LONG HAIR IS HIGH MAINTENANCE. Yes, I’ll admit that it is a look that requires tender loving care. It is impossible to body surf without getting seaweed tangled up in it. It is impossible to get it completely dry when one is in a rush to get to a job interview or a blind date. It is impossible to forget one’s hairbrush when one travels. It is impossible to garden or farm or weave or cook without one’s hair getting in the way. I have knitted many a gray strand into many a scarf. Which, by the way, I consider a nice touch. Anyone who disagrees can send me back his Christmas present. It is impossible to let the vacuuming go for too long, lest the bezoars (new vocabulary word) become large enough to choke a tiger.

Check Out the 847 Reader Comments HERE:


Dominique Browning, the author of “Slow Love: How I Lost My Job, Put on My Pajamas, and Found Happiness,” writes a column for the Environmental Defense Fund Web site and blogs at SlowLoveLife.com.

Permalink Reply by Bleacheddecay on October 23, 2010 at 12:21pm
I have long hair. I have no intention of every cutting it "short" as I don't like the look on me. I've never understood how people can decide due to age the type and length of hair EVERYONE should have. Sorry. I don't buy it.

Permalink Reply by Paula T. on November 2, 2010 at 11:59pm
I'm in total agreement. I am in my mid-40s and my hair is down to my waist. It was shoulder length for a few years when my sons were young and short when my younger son (who is now 21) was a baby. Once he started pulling it I cut it short. I absolutely hated it short! I've never had my hair this long and have no desire to cut it. Much easier to take care of (unless one has very short hair) and a visit to the salon four times a years saves me money.

Permalink Reply by Lisa on November 3, 2010 at 12:39am
There are no real rules, only ones that people imagine should be imposed upon them. I think you should wear what you like, and what you are comfortable with. To hell with people who criticize it.

I remember Cosmopolitian once having a short blurb--"If you're over 17, your hair should not go past your shoulders." and I thought, "Who are they to decide what looks good on everyone?" I haven't read the magazine in years but I'm sure it's still spouting out archaic and vestigial beauty advice. Beauty is not something in makeup and hairstyle for me. Beauty is in the personality of a person, and if they like their hair best when it is long rather than short--I support them.

For me, I never looked good with short hair, and I love braiding it into uber-long pigtails and wrapping them up into elflike buns.

I've never thought this deeply about hair.  I have always just assumed I'd do what I wanted with it whatever age I am.  I also assume that elderly women all have the same hair (short and permed) because it's easier to deal with when one has arthritic, grumpy old hands.  I particularly love the older ladies who then dye it that noticeable shade of lavendar.

Anyway, I was unaware that I had an age limit for certain styles.  What a drag.  I will probably choose to ignore it.  :o)

Permalink Reply by Ava Wilson on December 27, 2010 at 12:31am
My mother is 56 or 57, and she hasn't cut her hair in at least 15 years. Her hair is to the middle of her back and she doesn't plan on cutting it any time soon. I'm trying to convince her to layer it, at least, or cut it up to just below her shoulderblades (a few inches) at least to get rid of split ends. But I like my mother with long hair and I wouldn't have it any other way. I wouldn't cut my hair short at that age either.

Permalink Reply by Alayna on February 13, 2011 at 9:56pm
I have to admit, that when I was younger, I thought the same stoooopid way...that a woman "should cut her hair short" when she turned a certain age.  But as I grew older, I started to shake some sense into myself...and ask the question..."why on earth do I and others feel that way".  Now, as a Witch, it's so very different..none of that worthless nonsense makes any sense...women should be free to be as they choose.  who is to dictate what should or should not be?  Age, is not a determining factor...for anything.

Permalink Reply by Helena on May 17, 2011 at 3:57am
I love my long hair, my partner loves my long hair, and I have just turned 47. Tough titties. Currently I get the "you don't look that old", and I know that will be replaced with "grow up and cut your hair", as good genes will not save one from the inevitable for ever. Me thinks people need to criticize so that they can better look at themselves in the mirror.

I recently turned 30 and cut my long hair off to above shoulder-length. It was hard to do since I love the look of long hair. I'd always thought I'd be that old lady with the beautiful, long grey-silver hair. Then I just got sick of it -- it was way too high maintenance. I didn't go to the salon nearly enough, so it was never as shiny as I wanted, and since it was really thick, I had to let it air dry for an hour or so before blow drying it -- my roots would get flat and greasy if I didn't dry it at least every other day. If I slept on wet hair, it would still be wet in the morning. So, I cut it almost exclusively for convenience. Once I got used to the short hair, I fell in love with it. I still kind of miss the "idea" of being some kind of busty (I am busty, lol) sex kitten with long beautiful hair, but my boyfriend runs his fingers through my short hair all the time, making me feel even sexier. I can also be more creative with the style. My hair is really fine (it's thick in terms of how much hair I have), so it didn't hold any sort of style when it was long. Anyway, that's it. Kudos to you though for keeping it long!! I hate tradition, but I am lazy :)

Why I am just like Piper Chapman...what about you?

WHY must we wear a bra?