I'm somewhat ashamed to admit that I never heard of this author before, but apparently his previous novel, The Corrections, published in 2001 was the literary phenomenon of the decade. His latest, Freedom, due to be release August 31st, is considered by this reviewer to be every bit as good. This is an excellent book review, so if you have a few minutes to spare, find out why he is 'one of a kind'....
Here is a couple of interesting quotes to 'wet your appetite.'
"The weird thing about the freedom of Freedom is that what it doesn't bring is happiness."

"For Franzen's characters, too much freedom is an empty, dangerously entropic thing. After all, energy companies are free to ravage and poison the breeding grounds of the cerulean warbler. If Patty and Walter divorced, they would be free, but it's a freedom they would do almost anything to avoid. At her lowest ebb, Patty reflects that she "had all day every day to figure out some decent and satisfying way to live, and yet all she ever seemed to get for all her choices and all her freedom was more miserable." And no one is freer than a person with no moral beliefs. "One of the ways of surrendering freedom is to actually have convictions," Franzen says. "And a way of further surrendering freedom is to spend quite a bit of time acting on those convictions."

"Franzen's main extravagance is watching birds, a hobby he took up after The Corrections. Until then, his life had been geared and balanced for constant struggle. "I don't think, until The Corrections was published and had done well, I'd ever allowed myself joy for its own sake," he says. "

"But not even Franzen can watch birds all the time. "There were a couple of years when I could enjoy blowing off a workday and going bird-watching," he says, "followed by some years in which I came to realize that because my purpose on earth seems to be to write novels, I am actually freer when I'm chained to a project: freer from guilt, anxiety, boredom, anger, purposelessness."

"Birds are supposed to be free, or that's what the song says, but when Franzen looks at them, that's not what he sees. Birds aren't free. They have work to do — eat, breed, fly, sing — and they do it. They're not paralyzed by self-consciousness or indecision. When Franzen watches birds, he sees himself, but himself at his best, which is at work, miserable work, in his rented office, chewing tobacco (he's still at it), shouting himself hoarse in front of his crippled laptop. Birds don't take vacations, and neither does he." 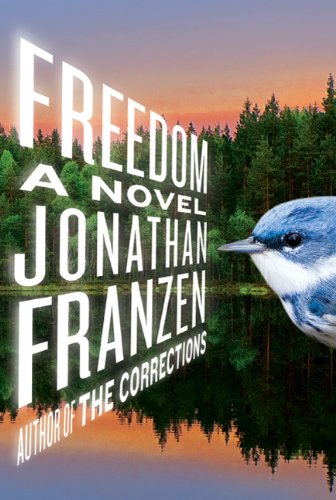 Check the book out on Amazon HERE: