Current Events & World News is the place to post all your current news threads. Posts can be of particular interest to atheists, or they can be about domestic or foreign politics and events in general.

Alaskans Speak (In A Frightened Whisper): Palin Is “Racist, Sexist, Vindictive, And Mean”

Judge: Let lesbians into military so male GIs can turn them straight

American Psychosis: What happens to a society that cannot distinguish between reality and illusion?…

You need to be a member of Current Events & World News to add comments!

Suicides soar among US middle-aged people 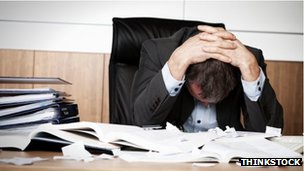 The suicide rate among middle-aged Americans rose 28% in a decade, a new report from the Centers for Disease Control (CDC) has found.

The CDC did not investigate causes behind the trend, but noted many suicide prevention programmes were geared towards youths and the elderly.

The report found no significant change among other age groups.

Since 2009, suicide has claimed more Americans than motor vehicle crashes.

People aged 35-64 accounted for some 57% of suicides in the US, according to the data.

Experts are unsure about what caused the increase in suicides to be so disproportionately steep among Native Americans and white people, during a period which spanned the recession.

The sharpest increase in suicides in the study was among 50 to 64-year-olds of all ethnic backgrounds.

Death by firearm was still the most common method of suicide among middle-age Americans, representing 48% of such recorded incidents in 2010.

Hangings overtook drug overdoses in this age group, becoming the second most common method of suicide.

Comment by Pope Beanie on April 28, 2011 at 11:56pm
Had another funny thought about where whackos belong. Perhaps Trump's announcement (that he supposedly can't release until end of his Apprentice show season) will be that he'll take Beck's place at FOX.

I expected Obama to use the birther issue eventually and smartly, but I wonder if it's a bit premature right now. I want the whackos to win some primaries, so they can be cut down to size and lose in November. I would have held the birth certificate back a few more months, at least.

I'm not trying to start a discussion. (Wish I had more time!) Maybe I'm just wishing others could contribute here. Say, speaking of current events and whipping up interest, I wonder if all those tornadoes are God's punishment because of Westboro Babtist Church? Sure, they're in Kansas, but that's close enough, right?

Comment by T A A on March 15, 2011 at 3:27am
It's my impression from reading various sources that we're indeed not dealing with a catastrophic meltdown but a very slow one, like an annoying slow leak on a tire. I may of course be wrong. But very often the truth is somewhere in between. The risks of not acting due to "under" alarm are much greater than the reverse risk.

Comment by Pope Beanie on March 15, 2011 at 2:15am
I just ran into a very well written article that explains more about how the Fukushima reactors are designed to work, and fail if necessary. Even though well written, I had to be skeptical... but I later learned that it was written by an MIT physicist, and MIT has created a new (I think) website to host his article and news: http://mitnse.com

I'm always skeptical of mainstream news, but this time it looks like they fooled me into believing that a nuclear meltdown/catastrophe is currently in underway.

Now I could be wrong, but NOW I'm assuming that the MIT guys are right, and mainstream news is totally wrong and unnecessarily alarmist.

This is actually quite interesting and spectacular. All those explosions, fire, and evacuations of populations and emergency plant personnel! It might all just be non-event, with very expensive mega-fireworks!

I hope MIT is right.

Comment by T A A on March 12, 2011 at 9:25pm
Another fantastic example of how knowledge knows no master, it equally serves "good" and "bad". At least 13 people died and 140 were injured in clashes between Mus...

Both Coptic Christians and Muslims were killed in the violence, which began during a protest by Copts against last week's burning of a church.

The clashes come two months after a suicide bomber killed 23 people at a Coptic church in Alexandria.

In January, an Egyptian man was sentenced to death for shooting dead six Copts and a Muslim policeman in Naga Hamady, southern Egypt.


The violence erupted when Coptic protesters blocked a highway in the Egyptian capital, protesting against the burning of the church in the province of Hilwan.

The rally angered Muslims who wanted to pass through. Witnesses said both sides threw stones, and the army fired into the air to disperse the crowds.

The Grand Imam of al-Azhar issued a statement on Tuesday condemning the attack on the church in Atfih, Hilwan governorate, as "a distortion of Islam".

Meanwhile, thousands of Coptic protesters continued their sit-in outside the state television building. They are calling for the rebuilding of the church, better protection for Christians, and a full investigation into last week's attack.

Copts - who make up about 10% of Egypt's population - have often complained of harassment and discrimination, and argue that attacks on them go unpunished or result in light sentences.

The government in the predominantly Muslim country denies discriminating against Copts.

The focus of Friday's protest is a Shiite prayer leader arrested last week, and cited below from Stratfor reportage.

Ahsaa province demonstrations to protest the detention of Sheikh Tawfiq Al-Amer, a Shi'ite cleric arrested February 27 after calling for a constitutional monarchy during last Friday's sermon.

He said that there had been no evidence that Moammar Gadhafi or agents working on his behalf had tried to withdraw funds before the sanctions order went into effect.

Haha, those idiots. That is so cool!!

The Treasury Department says that at least $30 billion in Libyan assets have been frozen since President Barack Obama imposed sanctions on Libya last week.

David Cohen, Treasury's acting undersecretary for terrorism and financial intelligence, said that the $30 billion represented the largest amount ever frozen by a U.S. sanctions order. He said that there had been no evidence that Moammar Gadhafi or agents working on his behalf had tried to withdraw funds before the sanctions order went into effect.

Cohen, speaking to reporters on a conference call Monday, refused to provide any details on how many U.S. financial institutions held the Libyan assets or how the money was divided between Gadhafi and his family and the country's sovereign wealth fund.