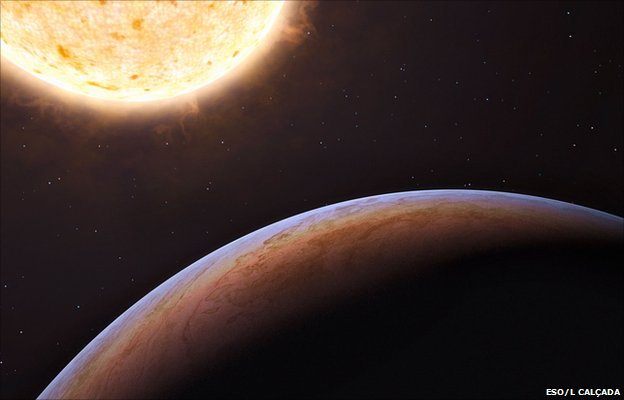 This artist's impression shows HIP 13044 b, an exoplanet orbiting a star that entered the Milky Way from another galaxy


Astronomers claim to have discovered the first planet originating from outside our galaxy.
The Jupiter-like planet, they say, is part of a solar system which once belonged to a dwarf galaxy.

This dwarf galaxy was in turn devoured by our own galaxy, the Milky Way, according to a team writing in the academic journal Science.

The discovery was made using a telescope in Chile.
Cosmic cannibalism

But all of those so far discovered, say the researchers, are indigenous to our own galaxy, the Milky Way.

This find is different, they say, because the planet circles a sun which belongs to a group of stars called the "Helmi stream" which are known to have once belonged to a separate dwarf galaxy.

This galaxy was gobbled up by the Milky Way between six and nine billion years ago in an act of intergalactic cannibalism.

The new planet is thought to have a minimum mass 1.25 times that of Jupiter and circles in close proximity to its parent star, with an orbit lasting just 16.2 days.

It sits in the southern constellation of Fornax.

The planet would have been formed in the early era of its solar system, before the world was incorporated into our own galaxy, say the researchers.

"This discovery is very exciting," said Rainer Klement of the Max Planck Institute for Astronomy in Heidelberg, Germany, who targetted the stars in the study.

"For the first time, astronomers have detected a planetary system in a stellar stream of extragalactic origin. This cosmic merger has brought an extragalactic planet within our reach."

Dr Robert Massey of the UK's Royal Astronomical Society said the paper provided the first "hard evidence" of a planet of extragalactic origin.

"There's every reason to believe that planets are really quite widespread throughout the Universe, not just in our own galaxy, the Milky Way, but also in the thousands of millions of others there are," he said, "but this is the first time we've got hard evidence of that."
End Days

The new find might also offer us a glimpse of what the final days of our own Solar System may look like.

HIP 13044 is nearing its end. Having consumed all the hydrogen fuel in its core, it expanded massively into a "red giant" and might have eaten up smaller rocky planets like our own Earth in the process, before contracting.

The new Jupiter-like planet discovered appears to have survived the fireball, for the moment.

"This discovery is particularly intriguing when we consider the distant future of our own planetary system, as the Sun is also expected to become a red giant in about five billion years," said Dr Johny Setiawan, who also works at the Max Planck Institute for Astronomy, and who led the study.

"The star is rotating relatively quickly," he said. "One explanation is that HIP 13044 swallowed its inner planets during the red giant phase, which would make the star spin more quickly."

The new planet was discovered using what is called the "radial velocity method" which involves detecting small wobbles in a star caused by a planet as it tugs on its sun.

These wobbles were picked up using a ground-based telescope at the European Southern Observatory's La Silla facility in Chile.

More on This Story