Despite looking really goofy, Vibram's FiveFingers sock-like shoe is creating a revolution in outdoor recreation footwear and may start taking a bite out of the $17 billion running shoe industry.

FiveFingers ($75-$90) looks like a glove for the feet -- with individual pockets for each toe -- but features a thin but flexible sole. It purports to "enhance your sense of touch and feel, while improving foot strength, balance, agility, and range of motion" and to be an "ideal crossover shoe" for sports ranging from bouldering to windsurfing, running and yoga.

Half-Moon Outfitters owner Beezer Moulton has been offering FiveFingers for more than a year and admits that his stores, and Vibram itself, can barely keep up with demand.

"It started blowing up in the Savannah store about 12 months ago. Special Ops forces came in and got two or three pair at a time before being deployed," recalls Moulton. "(FiveFingers) were originally designed for water sports, but more and more people are buying them to run or to experiment with running."

Inadvertently assisting the surge in interest is the best-seller "Born to Run" by Christopher McDougall, which was featured in the Sept. 29 Your Health edition of The Post and Courier.

While the book is about McDougall's adventures with the Tarahumara, the tribe in Mexico's Copper Canyon famed for running long distances in home-made sandals, "Born to Run" also has become a manifesto for barefoot running and, subsequently, an unexpected boon for FiveFingers.

McDougall, who is not paid by Vibram, advocates barefoot running as a way to improve running form and biomechanics. On Monday, McDougall was in Charleston as part of a six-day tour of Half-Moon stores in Atlanta, Athens, Greenville, Columbia, Mount Pleasant, Charleston and Savannah. The tour included not only talks and book signings but group runs as well.

Despite the pouring rain, more than a dozen people came out to join McDougall on a run on the Cooper River bridge. Beforehand, during a short tutorial on the smooth, fresh pavement of Mount Pleasant Memorial Waterfront Park, McDougall underscored that running barefoot is natural and that the only bad technique is to land on your heel.

"The only three things you need to do are be light, quick and invisible," says McDougall, who found himself tasked into the role of barefoot running coach by readers.

"Think of your foot landing as lightly as possible. If your foot is landing lightly, you can't be jumping up and down. Your foot has to be close to the ground at all times. Think about quick. Get your foot off the ground as quickly as possible. ... And then invisible. People, when they run barefoot, they want to watch their feet. You don't want to see your feet as much as possible."

Despite seeming like a barefoot zealot, McDougall is not anti-shoe.

"This conversation is not shoes versus bare feet," he says. "Shoes are better than bare feet. It's always better to have some sort of protection. The problem is that shoes have overwhelmed bare feet. And have taken over their jobs. When I go back to shoes, my (running) form goes to pot. ... So when I run, I'm totally barefooted."

The pitch to run "barefooted" in something you actually have to buy preceded FiveFingers.

In 2005, Nike introduced the Nike Free, a highly flexible shoe that was supposed to be as close to barefoot running as possible in a shoe. Not only has the Free continued to evolve, and to garner imitators, but other minimalist shoe models started popping up, including Terra Plana and Feelmax.

But it's Vibram that seems to be carving the larger niche for a growing barefoot crowd.

Jim Kelly, a Vibram sales representative in the Southeast, says the company expects to triple its sales of FiveFingers this year.

"There has been a barefoot running movement for a long time, but they were having issues with stepping on stuff. Now they've discovered FiveFingers," says the Traveler's Rest-based Kelly, adding that the barefoot fringe may be going mainstream. "A lot of it has to do with people realizing that they can run in a more natural way and be more pain-free,"

Kelly, who has been a runner since the 1960s, has been running in FiveFingers up to seven days a week. He, too, seems surprised at the innovation.

"If you told me a year ago that I'd be running basically barefoot on pavement seven to 10 miles at a time, I would have said there was no way."

Permalink Reply by Gaytor on October 10, 2009 at 12:54pm
I hike quite a bit and saw a guy wearing them up on a mountain. Not exactly the place the place that would be easy on the feet. He said that it was his second pair and that it takes some getting used to, but he loves them. Maybe the ole Brooks will have to take a take a rest while I try them out.

Permalink Reply by Johnny on December 4, 2009 at 9:38am
That is awesome Ralph! Thanks for the testimonial.

Permalink Reply by Johnny on December 4, 2009 at 10:14pm
Another article about Virams and barefoot running: Barefoot Running Shoes 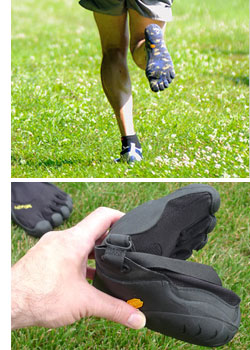 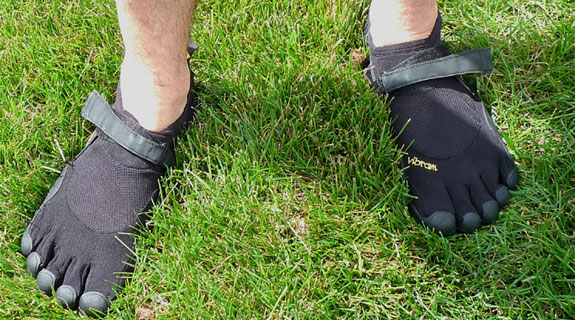 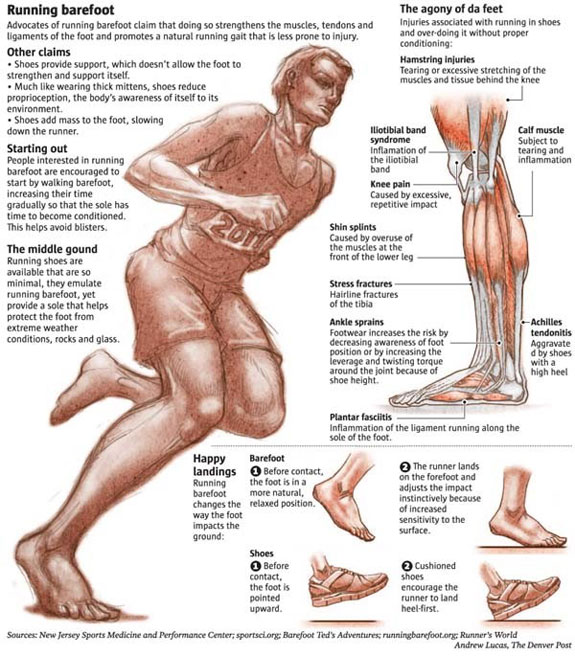 Permalink Reply by Morgan Matthew on December 5, 2009 at 4:13pm
They don't look all that terrible. I'll see if I can pick some up.

Other tips from an Old Runner...