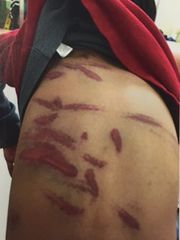 That's a lot more than a swat on the behind to get a kid's attention or even a good spanking. That's a beating and she belongs in jail. Hopefully the kid can be handed over to more responsible adults.

I saw that.  Luckily, she was found guilty despite a solid woo-based defense.

Unfortunately, she beat the poor kid UNTIL she was made to stop.

Same with the one's who don't bring the kids to the hospital, or get them vaccinated, etc, but pray instead...and the kids die or have polio, or whatever, because the parents essentially are insane, but in a way that society is very tentative about pointing out.

I mentioned this in my last Sunday School. I have posted a few similar articles over the years. However there are many more I do not post because they are just too much. I am constantly reading about the sexual and physical abuse of children by the religious. I am not easily upset or surprised by much any longer but the levels of depravity that some humans can sink to can still be baffling, especially when these crimes are committed with a religious justification. We hear of the barbaric crimes committed by ISIS but sometimes I think they are tame in comparison to what some “ordinary” people of faith do to children.

What is also annoying (for lack of a better word) is when apologists come along and claim that religion is not necessary for such behavior or equate atheists with Stalin or Nazis. Even if that were true (and it absolutely is not) it would only be an attempt at deflecting from the fact that religion does indeed allow people to do terrible things that without religion they would never do.

Yeah, lots of "Um, I walked into a door/wood chipper/fell down the stairs by accident" and so forth.

I got beat, but not for religious reasons (Yay!)

I did have to lie to the doctors about what happened, but at least they did take me when needed....or tell me to go myself if I could make it, as the Doc was local.

On the plus side, the doctor was so used to weird injuries, that after I got shot gunned while being somewhere I wasn't allowed to be, he removed the bird shot from my leg w/o telling my parents I had been there.  It was about the ONLY time he probably thought THEY didn't do it to me.

So, Jade, I had to leave home when I started to not lose when fighting back...how'd you manage?

My beatings stopped at ~ 16, which is, surprise surprise, when I needed to move out because I was no longer welcome...because I was winning.

My wife's dad used to beat her too, and her siblings.

Both of our dad's punched and kicked, and sometimes used other stuff.  Her mom was not abusive, but abused.

MY mom was abusive too, and she liked flexible stuff, like toaster cords, coat hangers, stuff that wrapped the blocking arm, and swung round and whacked you, etc.

On the flip side, my dad did not beat my mom.  He WOULD beat us if we didn't LET my mom beat us though, which was frustrating.

I'm glad he stopped beating you at least, even if his reasoning was screwed up...any port in a storm.

My dad had a leather belt with brass studs, and the welts from that mo fo were awful.  They ripped the skin pretty bad, so the black and blue was ragged with torn flesh.

Until I was maybe 8-9 or so, I thought EVERYONE "got spankings"...as my dad called them.  It was weird when I found out that THEIR spankings were with an open hand on their butt, and barely made the butt red...and mine required stitches, and to the head, face, arms, legs, whole body, etc.

My medical record looked more like Evel Knievel's than a kid's.

My mother had this funny idea of going for a boat ride in the rain. We went out all of my family and the dog. In central Canada rain can be torrential and freezing and our dog was shivering so bad we had to get back to the cottage quickly. The boat motor stopped. My father tried extra hard to pull the string and start the motor. On his last attempt his hand slipped off and broke my mothers nose. My brother got the dog into the house with a fire and I went with my parents to the hospital. I will never ever forget the looks on the doctors faces when my father said "my hand slipped while trying to start the motor in the rain". Almost never have I seen a group of people completely disbelieve something I knew was true.

You KNOW its true, and, everyone thinks you made it up....arrg.

Now imagine it was the opposite, you are saying you got beat, and you're told you're a liar.

Now imagine the guy who beats you is THERE, when you are asked how you got hurt...and the other times, you were called a liar....by your own father, who convinces the people you are reporting him to, that you have mental issues and make things up to get attention.

Do you try to say he beat you, and get humiliated again?

How many times before you decide the beating you get for saying he beat you "works"?

How many times will him beating your brothers, if you say he beat you, will it take, to stop saying he beats us?

If not for feeling too guilty about my brothers getting added beatings, purposefully painful just to "teach ME a lesson", I would have never stopped.

I ended up sort of "beat proofed".  I just turned off the pain receptors and waited for it to stop.

At ~ 10-12, I started rolling with the hits, blocking subtly so it wasn't "fighting back", parrying the force to absorb it better, and at ~ 15 or so, I just unloaded a lot of rage and went on the offensive....again and again even though I'd loose, I was making it a fight. (My dad was a boxer and a wrestler, and came from a tough neighborhood, and the sucker was FAST)

I was already all but immune to the pain, and once I could prevent injury, I had nothing to lose.  My first fight in school I tore the absolute shit out of the guy who picked on me...he had no CLUE what he unleashed, and he was twice my size (I weighed 68 pounds in 8th grade for example, I was NOT a big kid, in wrestling, the only other kid in my weight class was a dwarf).

Now imagine it was the opposite, you are saying you got beat, and you're told you're a liar.

I was pummelled by my brother for years and I wasn't beleived. It's horrible. For the most part...not being beleived is far worse than being passively accused of something you didn't do. Your story seems far brutal which totally sucks.

It is still a humerous story that all of us tell about the tragic boat ride where the hospital staff in a middle of nowhere hospital was sensitive enough to suspect my mother's broken nose was due to a domestic problem...when in fact it totally wasn't and the shifty eyes and straight faces shown were straight out of a bad Hollywood movie.

Its is funny how those mental images and the associated emotions stay with you.

The people who saw your mom, well, I bet THEY tell the story about a guy who busted up his wife's face, and then made up some story about his hand "slipping"....but how THEY didn't buy that crap.

Sorry about your brother.  I was the oldest, so, my brothers at least never really posed that sort of threat....and I was protective of them, so I posed no threat to them either.

Were the beatings from your brother just asshole big brother stuff, or was it related to your sexuality?

My brother was a vicious asshole with a massive inferiority complex who needed no one special reason to be nasty and violent. Apart from him...the whole family were good people and I had a happy childhood otherwise...so it simply didn't seem possible that he was as bad as I said. When I turned 21 I cut told him I never wanted to see him again until he was ready to admit to the abuse and be 100% civil in my presence. Obviously that never happened and I haven't seen him since. I have no time for toxic human beings or fuck-ups who show no sign of change. My friends and family sometimes criticise me for this...but I make no appologies. If you're wise...you learn to set limits...be vocal about them...and stick by them without saying sorry. It's great living in an open society where you can create your own rules, be who you want to be and do what you feel is necesary despite what others think and say.

I wonder what a priest or rabbi or vedic guru would have to say about it. Hey...you share genetic material...you have a sense of duty to this piece of trash...or maybe make it seem like it was all my fault...or maybe tell me love is all you need and everything will work out.