Why I Believe Atheists are Going to Hell

I don't understand how anyone could be an atheist other than total mindless belligerent obstinacy, because obviously, that which does not exist can't cause anything so the universe can't come from nothing. We only have evidence for causation from something. Some atheists claim outside the universe doesn't abide in the cause and effect inside of the universe, but if that were true then the universe would never come into existence. Of course God can created from outside of time and space since God would transcend time and space. People say God can't create without time. Sure He can. He creates timelessly.

The only other approach I have ever seen atheists attempt is to claim the universe always existed in an infinite regress of cause and effects; but of course, that's false, because if there was an eternity of the past of cause and effects, you would have had an eternity to come into being before now so you should have already happened, having had an eternity to do so. It gets even doubly worse for the atheist, because if a past eternity was true, then you should never have existed because that past eternity would go on for eternity never reaching this point. Therefore, infinite regress is a man made delusion.

I guess I should say why I believe Jesus is God over other faiths. The reason I believe this is because I can't find a naturalistic explanation to account for the eyewitness testimony of the Apostles in various group settings. Group hallucinations are medically impossible - people never hallucinate the same thing. People don't willingly die for what they know is a lie so the Apostles truly believed it; that is, they did not fraudulently make up their eyewitness testimony. Swoon theory fails because Jesus wouldn't convince anyone He is the risen Messiah all tattered and torn, scourged down the bone, holes in His feet and hands, unable to walk on the 3rd day. Legends theory fails because the Apostles believed it from the beginning, set up the first churches on the resurrection appearances of Jesus, and even Paul who was converted about 2 years after the cross said he spent 15 days with Peter, with James, and with John who were key eyewitnesses. Their faith goes right back to the cross. I know the movie "The Enemy" (2014) might convince someone Jesus had a twin brother, but his character and nature couldn't fool the Apostles who had spent 3 years with Jesus.

I believe a sinner is eternally separated from God because God can't have fellowship with sin. Therefore, God the Son mercifully enters His creation to pay the penalty and ransom for sin so that whoever believeth in Him shall not perish but has everlasting life. Those who do not receive what Jesus did for them to redeem them back to Him shall perish in a state of eternal conscious separation from God. The closest thing I can think of what Hell will be like for Muslims, Atheists, JW's, 7th Day Adventists, Mormons, Calvinists, Roman Catholics, Buddhists, Hindus, Scientologists, other Gnostics, Deists and Agnostics, etc. is simply jail. We throw people in jail for life so they can't harm others so for those who reject Jesus who He truly is, the 2nd Person of the Trinity, must eternally be separated from those God loves, His elect, sons and daughters, namely Christians and Saints from the OT. That would be very unloving of God to allow someone who rejects and despises God to be able to interact with a person who is regenerated, has the Holy Spirit indwelling and eternal blessings, for there is no sin in the New City and New Earth.

Since there is no resurrection accounts (notice you are unable to find any sources from antiquity) except Jesus claiming to be God, He is the One and Only. For the atonement to be authentic, the Atoner must come in our likeness - the likeness of flesh - and that's what Jesus does as the perfect sacrifice for sins. When Jesus returns to reign on earth for 1000 years as the Son of Man, He will defeat the evil [atheist, etc.] nations, and His overcomer believers will reign on earth over the nations for 1000 years before the New City and New Earth commence eternity future.

That's why I believe what I believe since I don't know how disprove it. And there can be no greater proof. I can't even lose salvation, because I gave my life to the God who keeps: those who are born-again "they shall never perish" (John 10.28). Just ask yourself what proof could be better, and you will come up empty handed. You might claim you would believe if Jesus came before you now, but that contradicts His claim when He returns everyone will know it, and why would you even believe it who selfishly comes before you and not others. Why does the universe center around you?

Really? The amount of ignorance in that post is amazing.

Is this satire? That is the only thing that would make that mindless drivel* believable.

Threatening an atheist with hell is like telling an adult that santa won't bring him presents if they misbehave.

That's why I believe what I believe since I don't know how disprove it.

An interesting epistemic method.  If I cannot disprove something I must believe it?

By the way, you probably can't disprove the Koran.  Will you be smacking your forehead on carpets five times a day now?

Hmmm.  According to Matthew, Christ was born during the reign of King Herod the Great, which ended in 4 BCE.  Can you disprove that?  I gather you've already decided you can't.  According to Luke, Christ was born while Qurinius was governor of Syria.  Can't disprove that either, so you must believe it.  The problem is that Quirinius didn't become governor of Syria until ten years after Herod the Great kicked the bucket.

OK.  Did Jesus get crucified on the first day of passover (as the synoptics say) or the day before passover (as John says)?  Can't disprove either, gotta believe them both.

Basically I've used examples from both real life and your preferred mythology to establish that your standard of proof SUCKS.  I suggest you look into other methods of establishing the truth of an assertion.

I don't believe in Hell. It's not consistent with a loving god. god loves everyone. He does not torment anyone for eternity.

Mephistopheles is unemployed and homeless? 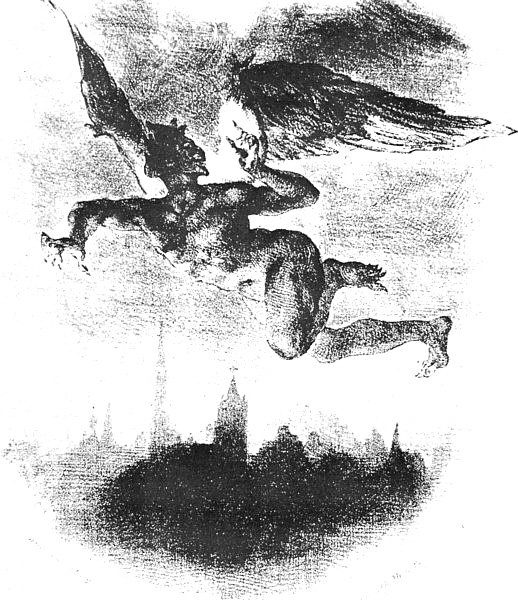 The burden that a Christian carries is heavy! They have to make all of this nonsense make sense... with fear and trembling.
Romans 10:9

If you declare with your mouth, "Jesus is Lord," and believe in your heart that God raised him from the dead, you will be saved.

21 “Not everyone who says to me, ‘Lord, Lord,’ will enter the kingdom of heaven, but only the one who does the will of my Father who is in heaven.

12 Therefore, my dear friends, as you have always obeyed—not only in my presence, but now much more in my absence—continue to work out your salvation with fear and trembling,

Did you really find this burden heavy? I don't. My experience matches what Jesus said, "For my yoke is easy and my burden light" (Matt. 11.30).

Recall too what Paul said, "For the invisible things of him from the creation of the world are clearly seen, being understood by the things that are made, even his eternal power and Godhead; so that they are without excuse" (Rom. 1.20).

So while you are playing pretend what does the Bible say? You are "without excuse" because nature clearly proves God's existence and Who He is Who confirms "My yoke is easy and My burden light."

So if you are finding it hard to accept or follow it is because you choose to live in your defiling flesh separated from the love of God.

How sad for you that this is the type of person you want to be.

"As an atheist, having a christian threaten me with hell is like having a hippy threaten to punch me in my aura."

ok... lets take a deep breath... All right James, you might not expect this, but I neither have a problem with your beliefs, nor someone else's. Yet, you could as well be a muslim, finding stuff christians think rather odd. So odd, that flying planes into buildings, beheading and stoning people who happen not to agree with them, including christians, is the right thing to do. For the most part though, they are all people trying their best to make something out of their lives, living by their religions of choice. The fact that many western countries allow people to live their lives as they wish and practice their beliefs (as long as it's not harming others) is precious. What ever makes you happy, go for it.

As for your assertion about the concept of "hell", it is pretty much a construct that is a component of the religious doctrine you happen to hold on to. According to a buddhist, "hell" would be reincarnation to a miserable life, which I'm pretty sure you would disagree with, just like the buddhist would not be convinced of your concept of "hell".

Now, if I would have replaced "buddhist" with "atheist" it would not change the context in any way, simply because you already are atheistic towards buddhist beliefs. That would make any discussion impossible to begin with. Perhaps we can at least agree to disagree and move on. :)

Do you really believe that about 1 billion Hindus and 1 billion Chinese are also going to go to your vision of hell because they don’t believe in your god just like we don’t?

James, are you able to communicate with this creator of the Universe on a one-to-one basis?