The suburbs are becoming the new slums

Remember the phenomenon of so-called "white flight" whereby affluent white folks sought shelter in the suburbs from crime or (in the case of racists) exposure to racial/ethnic minorities?

According to a new book from the Brookings Institution, the suburban poverty rate in America has climbed by 64 percent over the past decade, more than twice as fast as the poverty rate in urban areas.

Nearly 16.5 million people live in poverty in the suburbs, compared with about 13 million poor people in cities. (source)

Over the last decade, we've seen urban areas become gentrified, with affluent folks wanting to be downtown, close to the best shopping, the best restaurants, and urban nightlife.

I live in Euclid, Ohio, a suburb of Cleveland, one of the nation's poorer large cities. I'm white, but probably 85% or more of my neighbors are black. The area is very integrated, though, and racial tension seems to be nonexistent. However, due to the size of the rents in my building, few people living here can be poor. But go further away a few blocks and clearly the blacks there are not as affluent. They don't live in a high-rise on Lake Erie like me, but rather in small rental homes or two-story apartment buildings whose grounds are ill-kept. I'm sure there are plenty of poverty cases in this suburb.

Almost all of the downtown dwellers in Cleveland live in posh apartments or condos converted from warehouses, department stores, hotels, and other commercial buildings. They are affluent enough to be paying rents or mortgages in the multiple thousands of dollars a month, and nearly all of them, I'm sure, are white.

It's sad to see that white flight is still going on.

Permalink Reply by Melvinotis on May 20, 2013 at 12:55pm
I am sure that some marketing person will come up with a new catch phrase that defines the attraction to the center cities that is occurring everywhere.
White flight is the wrong term for what is happening, though. The young people moving into cities from the suburbs all over the country prefer mixed neighborhoods/buildings.

Oh, I'm with you. It's now affluent dark skinned people (honorary white people who can afford to live in a gentrified neighborhood..."some of my best friends are black") who are okay. Maybe the nature of racism has evolved.

Permalink Reply by Melvinotis on May 21, 2013 at 10:17pm
I was a tutor for kids in the Cabrini-Green projects in the late 80's. I can tell you that things have changed. Chicago Housing Authority has or is tearing down all of its high rise housing stock and moved all the residents into separate houses in and amongst the various neighborhoods. Credit to the powers that be to achieve that.

Being rural is still a good thing, thankfully.

The main difference is in terms of forced association. When people are forced to associate with each other, it's well-known to lead to conflict.

Permalink Reply by Melvinotis on May 21, 2013 at 9:52pm
A subway car in New York City might easily contain 30 different nationalities harmoniously respecting each others space. The perspective changes when ANY homogeneous group gets on that train-- whites, blacks, Hare Krishna's or buskers. So ad hoc groups can be part of your theory, but they also wreck it at the same time.

True, diversity may defuse what is an established fact: that personal space is a factor as a cause of friction, strife, and crime. It's worse when it's long term and inescapable. Just think of a large family living in a house that's too small for them. People are experiencing problems accessing the bathroom because there aren't enough bathrooms. The can't roll over in bed because there's another person on either side of them. They smell because they can't bathe daily. Under those circumstances it's easy to see how conflicts arise. Now, outside the family context similar strife happens when people find themselves constantly inconvenienced by shortages, long waits, and being forced to endure people invading their comfort zone (personal space). 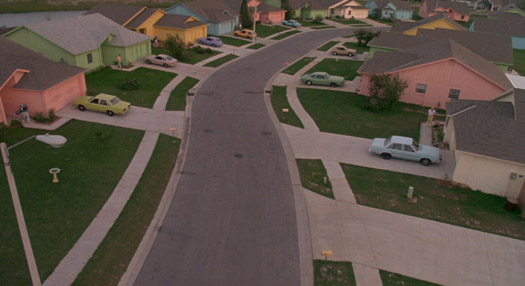 can be a bit scary...I hesitated to look anybody in the eye..seemingly safe,but actually very dangerous. Do I smell meth cooking?

I sold out of that and now really enjoy being a recluse in  the sticks.

I don't think its "White flight". I think its more of a social flight. Those who are educated with more financial opportunities are moving away from those who are not in their social class. The reason its more so white orientated, because whites are the majority in this country, which undoubtedly also means they are the most educated in terms of having the numbers in a group. So naturally by probability the majority of the people moving to a better social environment would be whites. Now that being said if you notice, its not just the educated whites who are moving, its also the educated non whites. So from my  own observation I think that is, educated whites and non whites see each other equal in terms of social class, more or less.

I'll be brutally honest. I don't know if it's just how our generation is panning out or it's society that's causing it, I think the same way too.  Personally I am gunning for a place where the neighborhood is an educated and white collar working neighborhood, regardless of what racial background it comprises of. Although I myself would prefer a more mixed neighborhood but that's just me. Is that discrimination against those who are in poverty? Maybe or Maybe not. But the way I look at it is, if I have the chance to a better opportunity in life, a better place to live, why not go for it.

She'd benefit from affluent whites moving in because, sadly, they are the ones that could pressure the powers that be to get the gangsters under control. Affluent folks who don't want to live around poor people and poor people's issues simply worsen the situation.

Yeah, but you have to understand their reasoning for not wanting to move into a poor area. The risks of getting robbed or killed rise significantly when you do that.

In the past, whites didn't want to live with "niggers." Today, it's a rag tag bag of minorities now also including Hispanics and poor whites who have become honorary niggers.