Yes I'm not an atheist, I'm a Christian and I came here to debate.
Does anyone see any faults with Christianity?
This seems like a very logical good ste and I'm exited to talk with you all.
:)

No. That's total bullshit. He's demonstrated multiple flaws in your arguments and you haven't properly addressed them. It's like saying "hey this magic rock works" and someone says "how?" and you say well cause I saw it work (but no other witnesses and no video) and also it was written so in this ancient Japanese book. What you fail to recognise is there are numerous kinds of responses which are unacceptable in rational discourse. Saying someone wrote down something isn't enough. You also have to demonstrate how that source is reliable and by reliable we expect very high standards similar to the kind of evidence expected in a court of law that demonstrates something beyond a reasonable doubt. If someone claims you stole the sir car, you and the court  would demand strong evidence bordering conclusive. Your neighbour believe ing whole heartedly that it happened...Is not evidence. Someone claiming so in a newspaper article is not admisable unless it's a reliable source backed by evidence. Badly connecting some irrelevant criminal history of yours  would be very bad evidence. Secondly experience or idiosyncratic interpretation of something is not evidence. So while you would demand that quality of evidence if someone accused you of stealing something...When it comes to defending your numerous outlandish or highly offensive claims...You've backed it up with from weak to utterly useless evidence...And you seem to think that's okay. With rational critical thinkers...It is not.

These two things (amongst several others) are critical thinking skills that anyone who considers themselves rational must learn and use well. Ancient books are terribly unreliable for the most part and what you or some people think or saw or heard is irrelevant without more evidence. Destroy TJs arguments...You have not. Totally failed at defending your claims...You have. It's actually not that funny.

so why dont you show me WHERE.

thats alot of bullshit for a simple accusation

I think you are one of us, Mr. Nathaniel--you know, homo sapien, human being--all like that.  What's in a label anyway?  Oh, don't humans just love themselves some labels, "Christian", "capitalist", "professional", "socialist", "cereal killer", "Murican", "European", and on and on.  But fundamentally, when we are born we are just "humans"...one assumes.  But then all the "world" hit's you in the face and that's when it gets interesting.

And, let's say that there is no God, since there isn't, and that means, by definition, every human being is a Tabula Rasa Atheist, which is really just like saying one is a human being--but again, the labels.

If Jesus was anything, he was an atheist human being, and somewhat of a Marxist style revolutionary insurgent for his colonized Hebrew people against The Man:  Ro-Man.  But he had a short and pretty much ineffective run in that regard and he died just like everybody else and is never not going to be dead, so basically:  get over it!

You are an atheist.  Everybody is, just most don't know it.

alright, if you assume im an atheist you statement is clear. but i merely meant that im not the every man on this forum, if you get what i mean.

also your definition is wrong, an atheist is someone who lacks belief in god, unless you assume no one believes.

anyway, believe what you want, but i can prove god if your willing.

also, jesus never incited a rebellion or taught against man.

That is a very vulgar observation to make, given that Hitler was a Christian and often claimed your god was on his side and that the Nazi party placed their trust in God. I assume your local preacher told you that lie.

“You haven't disproved me once…”

You are the one making claims but not offering evidence for them.

“anyway, believe what you want, but i can prove god if you’re willing”

No you can’t. You might be able to make some arguments as to why you believe in your God but you will not be able to offer us any objective evidence for that claim, never mind “proof”. Feel free to try but do so without mentioning the Bible. The Bible is the claim for God, not the proof of his existence.

“Jesus never incited a rebellion or taught against man”. That’s what Pilate said too :-)

yeah, but we both know well enough that hitler is not an argument against Christianity.  i wouldn't say, stalin was an atheist so i dont believe in atheism.

if you look through the post you will see that i have provided:

historical documentation apart from the bible

proof of the bibles historical accuracy.

verses from the bible that prove the bible is holy, if historically accurate.

along with beating arguments for why not to believe.

anyway, i'v given evidence to people who have asked, but you haven't asked me for any evidence yet.

ask for something specific, ill give it too you

The proof I need of your claims.

4. Prove you were dead and are alive again.

Simple stuff for your doG...don't forget to call when you get back. :)

Then don't equate atheists with Hitler. Nobody said Hitler was an argument against Christianity.

I did ask for evidence..

You might be able to make some arguments as to why you believe in your God but you will not be able to offer us any objective evidence for that claim, never mind “proof”. Feel free to try but do so without mentioning the Bible.

To be clear, what evidence do you have, that you can share with us, without mentioning the Bible. I am saying you have none.

Yawn, ye ol' "Hitler/atheist" card, I swear this tuff is on a script somewhere, yawn.

(To whom it may concern, Hitler's thang was pagan, Nordic/Teutonic Aryan Warrior type stuff.  Pagan Aryans are not atheists, just ask Ah-nold(whose daddy was an Austrian Nazi): 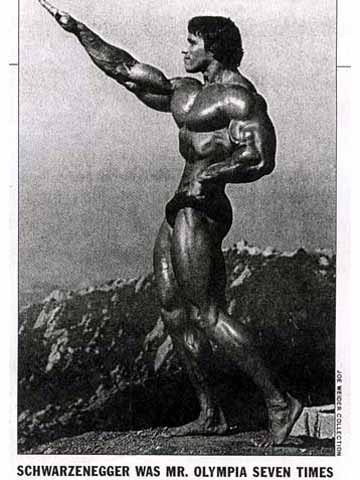 Questions have been asked but all you have responded with is another question that has/had no relation to the questions asked. You have not provided (with the exception of mentioning things you claim are proof but have no scientific validity) a thing except your (need?) to believe the unproven words in the Bible.

BTW there is nothing about science in the Bible nor any chance that anything scientific came about from consulting the Bible.

If you can show us a verse in the bible that corresponds to any scientific achievement or specific invention please quote it.

DO NOT reply with another question, we won't accept it. ANSWER TO THE ABOVE DIRECTLY (and yes, yes I'm shouting).

Now folks we can await his "answer/response" with baited breath knowing he cannot/will not respond appropriately.

Have at it Nathaniel.

"but i can prove god if your willing."