Can Atheists and Theists co-exist?

I am new to TA but the question I pose is certainly not a fresh one: Can Atheists and Theists co-exist?

We all know that historically Theists and other Theists cannot co-exist peacefully. War and violence in the name of Religion has been widespread over the entirety of human existence, but it has to be said that civility between believers and non-believers in the modern age has been commonplace. Formal (mostly amicable) debates and the agreement on separation of church and state have somewhat proven this theory, right?

Do the majority of Atheists really strive for a world of empty churches, bible burning and the end of religion forever? Maybe some of us do, just as many Theists probably pray for the conversion of all Atheists to Theism.

What can we realistically hope to achieve as Atheists, and in your opinion is it possible to co-exist with the believers?

I'll leave you with some interesting quotes -

"I'm noticing an exciting trend around the country: a resurgence of interest in Christian apologetics (the defense of the faith). This is a reaction to the current attacks on the essentials of Christianity that are coming from militant atheists, radical professors, and Internet gadflies."

"I am against religion because it teaches us to be satisfied with not understanding the world."

I work on cruise ships. I've been on a few religious "charters"- a whole ship full of people trying to "out Bibile" each other. They had their own religious entertainment. The casino was closed, and ironically turned into a Bibile/x-tian bookstore by covering all the slot machines and tables with sheets. They sold their books from the craps tables - lol.

We also had female "Roman-esque" statues in the showroom, that had one nippless breast showing, They had nipples originally but were sanded off and repainted, just after the ship came out because of a complaint from some "offended" pasenger. On the religious cruise they had another sheet draped over them so they wouldn't even have to see an offensive nippless breast on a statue.

On these charters ALL of the alcohol on board was gone/hidden. It was sold only in one bar on the ship, where the bottles were to be out of view at all times. They have mini bars and booze in the suites. The in-cabin sales of alcohol were through the roof. They were chugging the booze in the room, then poppin a couple of breath mints.

Many peoples first exposure to alcohol is at church.

It is so pathetic that these people contend that they were made in their god's image, yet they will cover the nipples on the breasts of a female statue, despite the fact that we ALL, male AND female, have nipples. Do they imagine their god to be nipple-less? Are their men so weak that they're likely to go on a rape rampage at the sight of a statue's nipple? I don't get their reasoning.

Europeans laugh at us, as they occasionally have bare-breasted women in TV commercials. Their attitudes toward the human body is SO much healthier than that of Americans, especially theists.

During the Bush years, laws were passed forbidding nudity on America TV, such as we used to see regularly on "NYPD Blue" (punishable by exorbitant fines by the FCC), but under Obama, those laws have been rescinded, yet I notice TV still blurs out even the slightest hint of side-boob in older movies.

Sometimes I really wish there were a heaven - imagine those anal-retentives, getting to paradise and discovering that it's a full-blown casino, open bar and strip joint!

So how many alcoholics or ex-alcoholics are on these cruises?

I not only CAN co-exist wih them, every Saturday morning I hope that a couple of J.W.’s or Mormons will knock at my door; it always makes my day.

Of course, being a reclusive sort and retired, it’s easy for me to avoid the corrosive influence of the religion paradigm.  For me, personally, theists are little more than a source of bemused entertainment - not a hindrance to my isolated contentment.

The more profound question should be whether the world at large can continue to co-exist with theists.  If, for example, religious extremists succeed in obstructing action on dealing with the rapidly warming planet until it is too late to save the planet, then the answer is no, we can't afford to co-exist with them.  We atheists don't look at the world as a staging area for passage into some ill-defined afterlife; it is all we have.  It would be suicidal for us to co-exist with a belief system that could spell doom for our species.

I am optimistic, though.  As I see it, the most theists can do is continue to slow down our intellectual progress as a thinking species, as they have been doing, with diminishing success, since the Dark Ages.  I truly believe, though, that we are in the last stages of the enlightenment - the time when there will no longer be any need for anyone to rely on superstition and wishful thinking.  With the unfortunate exception of the United States, the entire modern, developed world is rapidly moving away from religion; Christian churches in Europe, for instance, are emptying almost exponentially, even in nominally Catholic Ireland.

Of course, the day when the world will be free of religious delusions will not come till long after I have ceased to exist; meanwhile, I look forward to the fun of an occasional Saturday morning joust with ignorance.

Strega will be quick to tell you, Dale that only about 2% of the population of England regularly attend weekly church services. Obama (facing no new election) finally had the courage to leave god out of his T-Giving address to the nation, and the Republican Party is distancing itself from the Religious Right in droves. I think we're nearing the end times now - (the end of organized religion, not the one the theists are hoping for).

Did I mention that all the vicars and priests are included in that 2%?  I wish I had better access to those statistics again; I cannot remember exactly where I got them, but I do know it was a formal source, not a fun newspaper one.

Have you ever noticed in films or television programmes that when the protagonist goes int a church for some 'sanctuary' or whatever, that the churches are always empty?  Well unless its a funeral, wedding or baptism, that's pretty much what ours look like all the time.

Unless of course there is a busload of tourists with cameras eager to capture the historical beauty of the buildings.

Strega, as an additional point of irony, some of the medieval craftsman took it upon themselves to create defecating gargoyles that seem to be crapping either on the patrons, or another cathedral in close proximity. Of course, these wonderful stone beings are usually so high up..no one on the ground can really tell. I admit a remaining vestige of my catholic school upbringing..an great affinity for grotesques and gargoyles..Oh the sense of humor, even while perched 200 feet in the air. 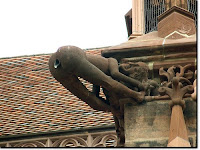 Can Atheists and Theists co-exist?

The question requires qualification: better is to ask whether they can co-exist in Reality, in Concept or by Perception ...

In Reality, we are physically forced to co-exist, but only by the necessity for Theists to maintain a belief, not because Atheists want a co-existence.

Conceptually, they cannot co-exist since the Theists accepted prescence of a God mutually excludes the rejection by Atheists of the existence of a God.

However, the question does not address the right paradigm: partly becuase it is the concept of Atheism that allows Theists to validate and perpetuate their beliefs, and maintain their delusions. Think how weak and insubstantial the arguements for 'radical Islamism' or 'Rapture' would be if there were no 'non-believers' against which to contrast their beliefs.

Therefore the question on co-existence precludes a valid Perception of what Theists think Atheism actually is ...

The doctrine of Atheism is highly dangerous to Atheists. It allows Theists to found the framework of a discussion within the contextual boundaries of ‘belief’ and ‘disbelief’ – literally that Atheists don’t believe in God, even though God exists; so they are able to present atheists as foolish and absurd as being unable to believe in something that patently exists.

They are able to then sequentially conflate and confuse the audience that belief is ‘important’ and it is only a difference in the acceptance of belief that makes Atheists different from Theists. In literal terms Theists take delight in presenting Atheism as a failed Perception of the truth: that God exists, but Atheists are unable to percieve God becuase they are deficient or flawed.

Ergo: co-existence is an assymetric paradigm - Theists require co-existence to maintain belief through a perception of opposites - belief in God versus disbelief in God; but Atheism cannot co-exist becuase there are no opposites - there is just simply an abscence of God, and belief is not part of the co-existent paradigm.

So to answer the question: No !  Atheists and Theists cannot co-exist becuase Theists need Athiests; but Atheists do not need Theists

Don't xians believe that Islam, Buddhism, Taoism, and Judaism are a similar failed perception of the truth, that (one true) god exists but they are unable to perceive the proper god because they are deficient or somehow flawed?

We may be one rung lower on the ladder of difference, with all the 'wrong' theists getting a slight credit for believing in something, but not entirely different. They could just as easily compare themselves with any other religion and feel the same way, no?

Similarly Tom, the biblical god needed a Satan - the most boring story is one with no conflict.