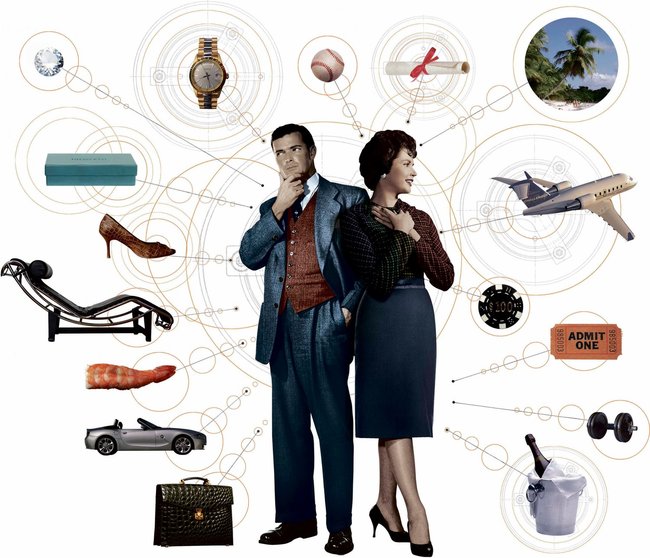 SHE had so much.

Yet Tammy Strobel wasn’t happy. Working as a project manager with an investment management firm in Davis, Calif., and making about $40,000 a year, she was, as she put it, caught in the “work-spend treadmill.”

So one day she stepped off.

Inspired by books and blog entries about living simply, Ms. Strobel and her husband, Logan Smith, both 31, began donating some of their belongings to charity. As the months passed, out went stacks of sweaters, shoes, books, pots and pans, even the television after a trial separation during which it was relegated to a closet. Eventually, they got rid of their cars, too. Emboldened by a Web site that challenges consumers to live with just 100 personal items, Ms. Strobel winnowed down her wardrobe and toiletries to precisely that number.

Her mother called her crazy.

Today, three years after Ms. Strobel and Mr. Smith began downsizing, they live in Portland, Ore., in a spare, 400-square-foot studio with a nice-sized kitchen. Mr. Smith is completing a doctorate in physiology; Ms. Strobel happily works from home as a Web designer and freelance writer. She owns four plates, three pairs of shoes and two pots. With Mr. Smith in his final weeks of school, Ms. Strobel’s income of about $24,000 a year covers their bills. They are still car-free but have bikes. One other thing they no longer have: $30,000 of debt.

Ms. Strobel’s mother is impressed. Now the couple have money to travel and to contribute to the education funds of nieces and nephews. And because their debt is paid off, Ms. Strobel works fewer hours, giving her time to be outdoors, and to volunteer, which she does about four hours a week for a nonprofit outreach program called Living Yoga.

“The idea that you need to go bigger to be happy is false,” she says. “I really believe that the acquisition of material goods doesn’t bring about happiness.”

While Ms. Strobel and her husband overhauled their spending habits before the recession, legions of other consumers have since had to reconsider their own lifestyles, bringing a major shift in the nation’s consumption patterns.

“We’re moving from a conspicuous consumption — which is ‘buy without regard’ — to a calculated consumption,” says Marshal Cohen, an analyst at the NPD Group, the retailing research and consulting firm.

Amid weak job and housing markets, consumers are saving more and spending less than they have in decades, and industry professionals expect that trend to continue. Consumers saved 6.4 percent of their after-tax income in June, according to a new government report. Before the recession, the rate was 1 to 2 percent for many years. In June, consumer spending and personal incomes were essentially flat compared with May, suggesting that the American economy, as dependent as it is on shoppers opening their wallets and purses, isn’t likely to rebound anytime soon.

On the bright side, the practices that consumers have adopted in response to the economic crisis ultimately could — as a raft of new research suggests — make them happier. New studies of consumption and happiness show, for instance, that people are happier when they spend money on experiences instead of material objects, when they relish what they plan to buy long before they buy it, and when they stop trying to outdo the Joneses.

If consumers end up sticking with their newfound spending habits, some tactics that retailers and marketers began deploying during the recession could become lasting business strategies. Among those strategies are proffering merchandise that makes being at home more entertaining and trying to make consumers feel special by giving them access to exclusive events and more personal customer service.

While the current round of stinginess may simply be a response to the economic downturn, some analysts say consumers may also be permanently adjusting their spending based on what they’ve discovered about what truly makes them happy or fulfilled.

“This actually is a topic that hasn’t been researched very much until recently,” says Elizabeth W. Dunn, an associate professor in the psychology department at the University of British Columbia, who is at the forefront of research on consumption and happiness. “There’s massive literature on income and happiness. It’s amazing how little there is on how to spend your money.”

CONSPICUOUS consumption has been an object of fascination going back at least as far as 1899, when the economist Thorstein Veblen published “The Theory of the Leisure Class,” a book that analyzed, in part, how people spent their money in order to demonstrate their social status.

Permalink Reply by Jaume on August 14, 2010 at 10:46am
It's not that easy to leave the Church of Appliantology.

Permalink Reply by Allen J. Thoma on August 17, 2010 at 8:34pm
Same here, I seem to be buried in stuff. I have been reading Rowdy Kittens for some time and I really respect what Tammy is doing. I want to move to a small house, get rid of most of my junk. The junk just keeps you working to support it. Tammy has done away with her car and only bikes. I would love to dump the car, the insurance on it, taxes, the environmental harm it causes. Hope I am slowly moving in this direction.

Happy people enjoy each day. When they travel, go out to eat, go for a walk, or read a book they enjoy it. Maybe they had to work on themselves to get to that point. Maybe it came naturally.

But those grasping for the next thing will never feel it unless and until they stop and get to know themselves. To examine and at least accept the black, white and gray areas of themselves is the key to beginning to find peace and happiness, IMO.

I think also it helps to give to society in some way. To be valued by yourself or others because of what you can do or give can help. For a number of years I was a stay at home mom. I felt privileged to be able to do that but I put part of myself on a shelf until I could fully be me again.

Later I was climbing the walls. I began volunteering and took a part time job. The lush enjoyment of me came back to life. This is why I tell stay at home moms today that it is essential to take time for themselves. Also to have adult time out in the world.

To newlyweds and other folks with kids I advocate dates and date nights as a couple to keep the relationship and the reasons you are together clear and fresh as well. I would have rather lived in a tent than give up our date nights once a month when the kids were small!

Okay, Wondered off topic a bit.